'Peaceful protests hallmark of democracy': US on farmers' stir

Farmers' protests: US state department says unhindered access to information, including the internet, is fundamental to freedom of expression and a hallmark of a thriving society 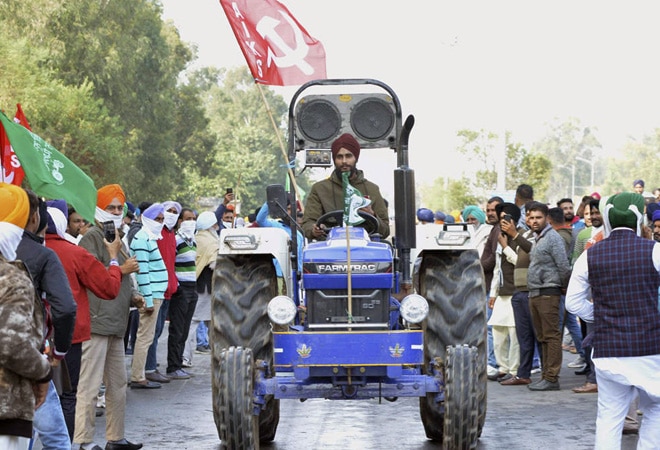 US indicates its supports for India's reforms in agriculture, says it welcomes steps taken to "improve the efficiency of India's markets"

As farmers' protests in India become the global talk of the town, the US state department has also jumped into the debate, saying peaceful protests are a hallmark of democracy and that differences could be resolved via dialogue. It said unhindered access to information is a fundamental right. However, the department also indicated that it supports India's reforms in agriculture, saying it welcomes steps taken to "improve the efficiency of India's markets".

The US state department in a statement said: "We recognise peaceful protests as the hallmark of thriving democracy, and Indian SC has stated the same. We encourage differences b/w parties to be resolved through dialogue. The US welcomes steps that would improve the efficiency of India's markets and attract more private sector investment."

The state department also said, "unhindered access to information, including the internet, is fundamental to the freedom of expression and a hallmark of a thriving society".

Ever since international pop star Rihana tweeted her support for farmer's protests on Wednesday, several American lawmakers have come out in support of farmers' right to protests.

why aren’t we talking about this?! #FarmersProtesthttps://t.co/obmIlXhK9S

"I am concerned by the reported actions against peaceful demonstrators protesting new agricultural reform laws in India," Congresswoman Haley Stevens said, adding that both parties should engage in productive discussions, reported news agency PTI. She said she will continue to monitor the situation closely.

Another Congresswoman, Ilhan Omar, tweeted that India must protect farmers' basic democratic rights, allow for the free flow of information, reinstate internet access, and release all the journalists detained for covering the protests.

Meena Harris, the niece of Vice President Kamala Harris, also alleged the world's biggest democracy is under an "assault".

"It's no coincidence that the world's oldest democracy was attacked not even a month ago, and as we speak, the most populous democracy is under assault. This is related. We ALL should be outraged by India's internet shutdowns and paramilitary violence against farmer protesters," she tweeted.

Gurinder Singh Khalsa, chairman of the Sikhs Political Action Committee, in a statement, said that this is the beginning of a movement for better accountability and transparency against crony capitalism.

"World was watching and now it has started reacting and mobilising in support of this historic revolution of Indian farmers. This will be bigger than India's freedom Revolution," said Khalsa in a statement.

Notably, the International Monetary Fund (IMF) had also said recently that India's new farm laws were a "significant step forward" for reforms in the agriculture sector.

Meanwhile, a war of words over the farmer's protests seems to have erupted over social media platforms, especially Twitter, with several international celebrities and activists standing behind farmers.

The government, on the other hand, has reacted sharply, saying some "vested interest groups" are trying to enforce their agenda on the protests.

Several Indian celebrities, including cricketers like Sachin Tendulkar and Virat Kohli, have expressed support for the government's stand on the ongoing farmers' protests, saying it's India's internal matter and that people should focus on the government's efforts to resolve the farmer crisis.