Prime Minister Modi says the Indian people would be pleasantly surprised to see the cow being given such an importance as a means of economic empowerment in villages in faraway Rwanda. 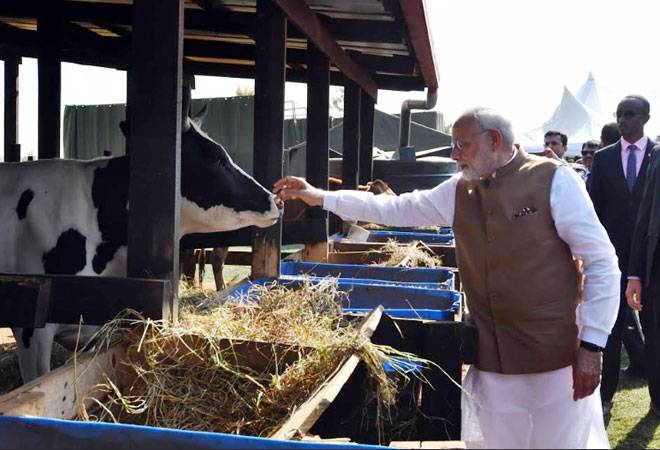 Appreciating the initiative, Prime Minister Narendra Modi said the Indian people would be pleasantly surprised to see the cow being given such an importance as a means of economic empowerment in villages in faraway Rwanda. He also spoke about the similarity in rural life in the two countries, and hoped the 'Girinka Programme' would help transform villages in Rwanda.

Got a glimpse of rural life in Rwanda during the memorable visit to Rweru Model Village.

I thank President @PaulKagame for accompanying me. Gifted 200 cows to villagers who do not yet own one, as a part of the Rwandan Government's Girinka Programme. pic.twitter.com/ZVxTCWnYJM

The word 'Girinka' means 'may you have a cow' and describes a centuries-old cultural practice in Rwanda whereby a cow was given by one person to another as a sign of respect and gratitude.

The programme was initiated by President Kagame in response to an alarmingly high rate of childhood malnutrition in the country, and as a way to accelerate poverty reduction and integrate livestock and crop farming.

Since its introduction in 2006, hundreds of thousands have received cows through the initiative. And by June 2016, a total of 248,566 cows had been distributed to poor households, said a government statement. The initiative has contributed to an increase in agricultural production in Rwanda, especially milk production. It has also helped in reducing malnutrition and empowering people economically, added the statement.

The programme is also aimed at promoting unity and reconciliation among Rwandans based on the cultural principle that if a cow is given from one person to another, it establishes trust and respect between the giver and beneficiary. While this was not an original goal of Girinka, it has evolved to become a significant aspect of the programme, said the statement.

The government follows certain criteria in choosing beneficiaries, and people from vulnerable background or those who don't own land are given cows as a means to support themselves and their families. Under the programme, the beneficiary needs to construct an animal shed or a community cow shed.

Before visiting the village, the PM visited the Kigali Genocide Memorial and pay homage to 2,50,000 victims of the mass genocide in 1994. "The path of peace and brotherhood embraced by Rwanda after the unfortunate genocide of 1994 is commendable," tweeted the PM.

Lesson from Flipkart-Walmart deal: How to stop global giant's complete takeover of an Indian firm