In addition, the ECB has decided to bar Greek banks from using govt bonds as collateral to borrow from the ECB while there is no prospect of an agreed bailout programme. 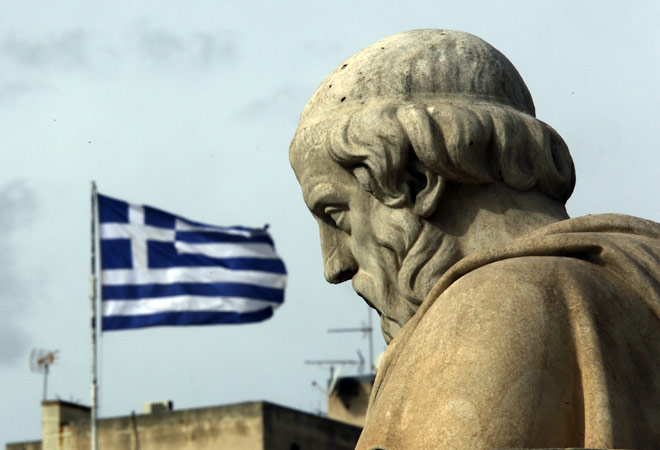 A Greek flag flutters above the statue of Greek philosopher Plato outside the Athens Academy, February 2, 2015. (Photo: Reuters)

Standard & Poor's cut Greece's long-term sovereign credit rating to B- from B on Friday, warning that liquidity restraints on Greek banks would limit the time the new government has to clinch a deal with its creditors.

Left-wing Prime Minister Alexis Tsipras was elected barely two weeks ago on a promise to scrap unpopular austerity measures imposed under a 240 billion euro ($270 billion) international bailout and write off a chunk of the country's debt.

Despite a tour of European capitals to drum up support for debt forgiveness, his government seemed isolated in the euro zone.

In addition, the European Central Bank decided this week to bar Greek banks from using Greek government bonds as collateral to borrow from the ECB while there is no prospect of an agreed bailout programme.

"Although the newly elected Greek government has been in power for less than two weeks, we believe its limited cash buffers and approaching debt redemptions to official preferred creditors constrain its negotiating flexibility," S&P said in a statement.

"Liquidity constraints have narrowed the timeframe during which Greece's new government can reach an agreement with its official creditors."

The rating agency said both Greece's long and short-term ratings remained on creditwatch negative, meaning they could be lowered again, and warned that drawn out talks could produce a worsening economic situation in the country.

"A prolongation of talks with official creditors could also lead to ... deposit withdrawals and, in a worst-case scenario, the imposition of capital controls and a loss of access to lender-of-last-resort financing, potentially resulting in Greece's exclusion from the Economic and Monetary Union", it said.