'That's not how you talk about friends': Joe Biden on Trump's 'India filthy' comment

US Elections 2020: In the op-ed Biden highlighted the values the Democrats have in common with Indians. He vouched for a diverse society 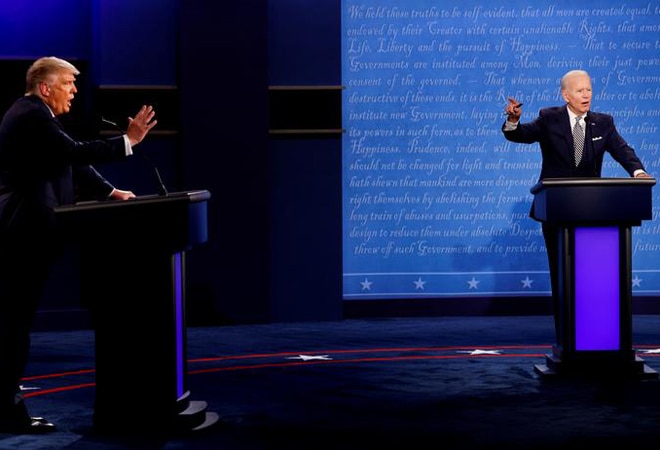 Joe Biden criticised President Donald Trump for his 'India is filthy' comment. He said that Trump has a poor understanding of global issues. The Democrat candidate said this is not the way to solve global challenges like climate change. During their previous face-off, Trump who was defending the US' decision to walk out of the Paris agreement, said, "Look at China, how filthy it is. Look at Russia. Look at India. The air is filthy."

"President Trump called India "filthy". It's not how you talk about friends - and it's not how you solve global challenges like climate change. Kamala Harris and I deeply value our partnership -- and will put respect back at the center of our foreign policy," said Biden while sharing a link to an op-ed in IndiaWest.

In the op-ed Biden highlighted the values the Democrats have in common with Indians. He vouched for a diverse society. "Four years ago in November, one of the last events I hosted at the Vice President's residence was a Diwali reception. Here I was, an Irish Catholic Vice President opening my home for a holiday traditionally observed by Hindus, Buddhists, Sikhs, and Jains, and that night joined by Muslims, Christians, and Indian Americans of various backgrounds representing the diversity of the diaspora," he said.

It's not how you talk about friends—and it's not how you solve global challenges like climate change.@KamalaHarris and I deeply value our partnership—and will put respect back at the center of our foreign policy. https://t.co/TKcyZiNwY6

Biden said that Trump does not share the same values. "But the truth is, President Trump doesn't share our values. As a result, today's America doesn't feel like the America of our dreams," said Biden. He said that through the Trump administration mishandling of the COVID-19 situation and his decision on H-1B visas, the Indian community has stood "as patriots on the frontlines of the pandemic as health care workers, researchers, small businesses owners, educators, and everyday workers" to keep the country going.

"And as we value the Indian-American diaspora, we'll continue to value the US-India relationship. For Donald Trump, it's photo-ops. For me, it's getting things done," he said.

"That's why if elected President, I will continue what I have long called for: The U.S. and India will stand together against terrorism in all its forms and work together to promote a region of peace and stability where neither China nor any other country threatens its neighbors. We'll open markets and grow the middle class in both the United States and India, and confront other international challenges together, like climate change, global health, transnational terrorism and nuclear proliferation," stated Biden.

He said that the Obama-Biden years were some of the best in terms of US-India relationship and Biden-Harris aims to do the same.

Indian-American Kamala Harris would be the first-ever woman Vice President of the US if elected. The US Elections 2020 are on November 3.

'Some countries on a dangerous track', says WHO about COVID-19 pandemic