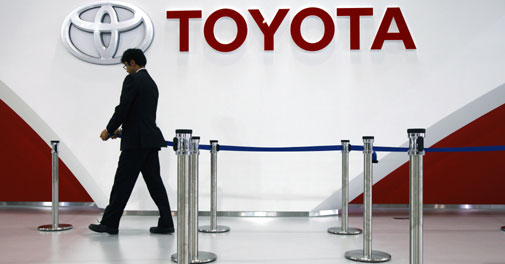 Toyota chalked up a record annual profit and sales above 10 million vehicles for the first time, but forecast a slower year ahead as the momentum from a weak yen fades.

Expenses such as the $1.2 billion penalty it paid in a settlement with the US Justice Department earlier this year for hiding information about defects in its cars dented its profit for January-March quarter, according to Toyota.

Toyota Motor Corp, the world's top automaker, is forecasting a 1.78 trillion yen ($17.5 billion) profit for the fiscal year through March 2015.

That's lower than what the company recorded for the fiscal year just ended, when its profit almost doubled to a record 1.82 trillion yen ($17.9 billion) from 962 billion yen the previous year.

Annual sales jumped 16 per cent to 25.69 trillion yen ($252 billion), helped by a weak yen which aids Japanese exporters and thanks to growth in the US, Europe, Japan and the rest of Asia. The yen perk is likely transitory as the currency isn't expected to weaken indefinitely.

Toyota believes Japan sales were inflated in recent months as consumers rushed to buy ahead of a tax increase that kicked in April 1, so that such growth won't hold up during the current fiscal year.

Still, the company is on a roll.

The maker of the Prius hybrid, Lexus luxury model and Camry sedan became the first automaker to sell more than 10 million vehicles in a 12 month period, with sales totaling 10.13 million vehicles around the world for the fiscal year ended March. It also expects to surpass the 10-million milestone for the current calendar year.

It is expecting solid growth to continue, hoping to sell 10.25 million vehicles globally for the fiscal year through March 2015.

Highlighting the Japanese automaker's ambitions, it noted that extra costs including research and development expenses were a factor in reducing its January-March profit to 297 billion yen ($2.9 billion) from 313.9 billion yen a year earlier.

It also said costs related to closing its auto plant in Australia cut into profits.

Toyota has bounced back from a massive recall crisis that began in late 2009, which tarnished its reputation.

But there was a moment of deja vu last month when it announced a recall of 6.4 million vehicles globally, for a variety of problems spanning nearly 30 models in Japan, North America, Europe and other places. Some vehicles were recalled for more than one problem.

Toyota has been trying to put the recall mess behind it, with the $1.2 billion settlement it reached with the US Justice Department. It earlier paid fines of more than $66 million for delays in reporting unintended acceleration problems.

The National Highway Traffic Safety Administration never found defects in electronics or software in Toyota cars, which had been targeted as a possible cause.

Even more of a threat than recalls could be the fierce competition Toyota faces in key global markets from Volkswagen AG of Germany and Hyundai of South Korea, as well as US automakers such as General Motors Co. and Ford Motor Co.

Toyota sold fewer vehicles in North American for January-March at 567,000 vehicles compared to the same period the previous year at 603,000 vehicles.

But it is making up for such losses in other markets.

Honda sold nearly 1.2 million vehicles worldwide during the quarter, also helped by demand ahead of the Japanese tax rise. It is forecasting a 4 per cent rise in annual profit to 595 billion yen ($5.8 billion).

Although the dollar soared to about 100 yen during the past fiscal year from about 80 yen the fiscal year before that, it's unlikely to keep rising at that pace, to 120 yen, for instance.