Boris Johnson and fiancee Carrie Symonds on Saturday named their new-born baby boy Wilfred Lawrie Nicholas, after their grandfathers and the two doctors who treated him for coronavirus 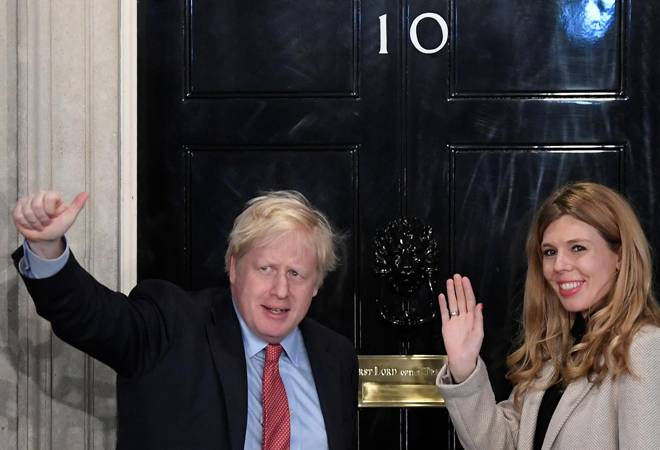 Boris Johnson and fiancee Carrie Symonds on Saturday named their new-born baby boy Wilfred Lawrie Nicholas, after their grandfathers and the two doctors who saved the UK Prime Minister's life during his hospitalisation last month with COVID-19.

Announcing the news on social media, Symonds, 32, said the baby was named after the UK Prime Minister's grandfather Wilfred and her grandfather Lawrie, with Nicholas a nod to the National Health Service (NHS) doctors Dr Nick Price and Dr Nick Hart.

In an Instagram post revealing the name, Symonds also thanked the staff of that hospital, saying: "I couldn't be happier. My heart is full."

The picture alongside the post shows Symonds cradling the new-born, who can be seen with a full head of hair and wrapped in a cream blanket.

The birth of their baby boy came just weeks after Johnson, 55, was discharged from intensive care at St Thomas' Hospital here following treatment for coronavirus.

A spokesperson for the couple said earlier this week that the couple were "thrilled" and that both mother and baby were "doing very well" following the birth.

It is understood Johnson was present throughout the birth, with Downing Street releasing a photograph of him beaming on his return to Number 10 following the arrival of his son.

He had to postpone his paternity leave due to the ongoing coronavirus lockdown and was back at work after just a day's break.

The birth came two days after he officially returned to work at 10 Downing Street on Monday from his recuperation from COVID-19 at the prime ministerial Chequers countryside retreat.

Johnson and Symonds announced their engagement at the end of February, when it was also revealed that they were expecting their first baby in the summer.

Symonds, who works for an ocean conservation charity Oceana, met Johnson during her time as the communications chief for the Conservative Party when he was the Mayor of London in 2012.

In July 2019, they became the first unmarried couple to move into Downing Street together.

The news of their impending wedding and baby was made public soon after Johnson's divorce from his Indian-origin ex-wife Marina Wheeler got finalised in February.

Wheeler, whose mother Dip Singh hailed from Punjab, is a barrister and columnist who has four grown up children with Johnson.

Johnson and Wheeler had separated in 2018 and announced their divorce plans soon after reports of Johnson's affair with Symonds became public.

His marriage to Symonds will be Johnson's third, following his divorce from first wife Allegra Mostyn-Owen and then second wife Marina Wheeler, and their child is his sixth, four with Wheeler and a fifth following an affair with art consultant Helen Macintyre.