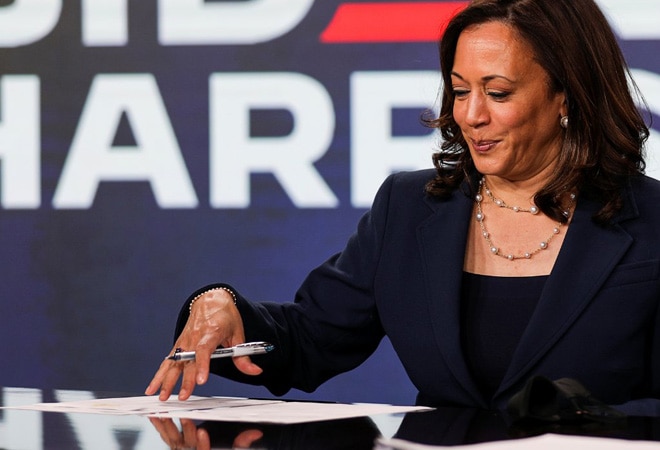 The election of Senator Kamala Harris as the Vice President of America is a "transformative" and "meaningful" moment for the United States, an influential Indian-American Congressman has said.

Following a tense week of vote tallying, Democratic presidential candidate Joe Biden won the state of Pennsylvania and vaulted ahead in the race to become the next president of the United States. Biden's win in the key battleground state put him over the threshold of 270 electoral votes, cutting off all avenues for his opponent.

"The election of Kamala Harris as Vice President is a transformative, meaningful moment for our country. Exactly 100 years after the ratification of the 19th amendment, we have elected America's first female Vice President," Raja Krishnamoorthi said after Democratic presidential candidate Joe Biden and his running mate Harris were declared elected in the November 3 presidential election.

"In a year of racial strife, we have elected America's first Black Vice President. The daughter of immigrants, Kamala Devi Harris also makes history as our first South Asian Vice President, he said. The former vice president's win brings a four year run of Trumpism to an abrupt end. Biden has laid out plans for sweeping climate action, and a healthcare extension that would cover more Americans and provide an opt-in Medicare-like public option.

"As an Indian-American, I'm very grateful that my children will see Kamala Harris, along with Joe Biden, as a role model when she enters office. I know she'll work to further the progress the United States has made in representation and equality, and countless people will be inspired by her example," Krishnamoorthi said.

"With more than 75 million votes overall and a substantial margin in the electoral college, the American people have elected Joe Biden as our next president with a clear mandate to heal our country's wounds while defeating the coronavirus and reviving our economy. The son of Scranton never forgot the commitment to make a difference that led him into public service, and he never will, he said.

"Today is the most historic day. America can look forward to a new beginnings ahead. I have been on the campaign since day 1 and I am so happy ! We are celebrating with Bhangra and Dhol today, said Ajay Jain Bhutoria, a Silicon Valley-based entrepreneur, and a Biden supporter.

A major fundraiser for the Biden campaign, Bhutoria said that it is is now clear that former Vice President Biden and Senator Harris have won the election with highest number of votes ever received by a Presidential candidate and will serve the country for the next four years as president and vice president of the United States.

"This is a truly a historic election. More Americans voted in this election than in any other, and President-elect Biden and Vice President-elect Harris have received more votes than any other presidential ticket in the history of our country. For the first time, we will also have a woman of colour and Indian Origin ascend to the second-highest office in the land," he said.

"Millions of Americans around the country have chosen a Joe Biden' Unifying progressive visionto rebuild our middle class, economy, control coronavirus and build back better our economy, restore America's leadership at world stage and address Racial injustice," he said.

"It's time for America to Unite and Heal. Its time to put the anger and harsh rhetoric behind us and come together to Rebuild out Nation under Leadership of President Elect Biden and VP Elect Kamala Harris. Best days of America are ahead, Bhutoria said.

US election 2020: Trump has no plans to concede, aides and allies indicate