After a two-day policy meeting, the central bank slashed its forecast for US economic growth to a range of between 2.1 per cent and 2.3 per cent from an earlier forecast of around 2.9 per cent, but expressed confidence the recovery was largely on track. 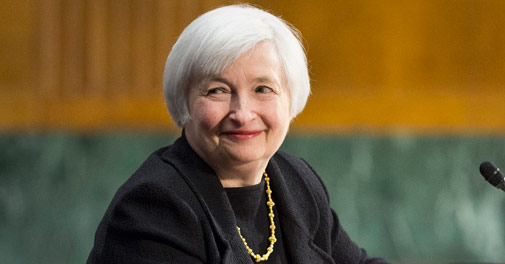 The Federal Reserve on Wednesday hinted at a slightly faster pace of interest rates increases starting next year, but suggested rates in the long-run would be lower than it had indicated previously.

After a two-day policy meeting, the central bank slashed its forecast for US economic growth to a range of between 2.1 per cent and 2.3 per cent from an earlier forecast of around 2.9 per cent, but expressed confidence the recovery was largely on track.

It also reduced its monthly asset purchases from $45 billion to $35 billion a month, divided between $20 billion of Treasury securities and $15 billion of mortgage-backed debt, as widely expected.

"Economic activity will expand at a moderate pace and labor market conditions will continue to improve gradually," the Fed said in a statement. "Household spending appears to be rising moderately and business fixed investment resumed its advance."

Updated economic forecasts from Fed officials reflected an economy slammed by bad weather at the start of the year but poised to continue growing. Fed officials maintained their growth projections for 2015 and 2016, and foresaw a faster drop in unemployment and tame inflation.

However, Fed officials projected a slightly more aggressive path of interest rate hikes for the following year, with the end-year median placed at 2.5 percent versus 2.25 per cent in March.

Importantly, Fed officials also lowered their projections for long-term interest rates, a potential sign of reduced confidence in the economy's long-run potential. The median projection was for a long-term federal funds rate of around 3.75 per cent, compared to around 4 per cent in March.

The Fed cut overnight rates to near zero in December 2008 as it battled the financial crisis and deep recession. The timing and pace of renewed rate increases is one of the key decisions facing the central bank as the current recovery evolves.

Financial market reaction to the Fed's statement was muted. Prices for US stocks were little changed, while yields on longer-dated government bonds rose modestly. The dollar moved higher against the euro and the yen.

STEADY AS SHE GOES

Its policy statement changed little from the one issued after its last meeting in April, repeating that interest rates would remain near zero "for a considerable time" after the bond buying ends. The Fed said unemployment remained "elevated" despite recent job growth, and noted that its preferred measure of inflation was still running below its 2 per cent target.

"Steady as she goes, with respect to policy," said Kim Rupert, managing director at Action Economics in San Francisco. "A lot of the doves want to make sure the recovery is for real and is in place and (are) still maintaining a very accommodative posture."

There were no further details provided in the statement about the Fed's plans to exit other aspects of the extraordinary measures it has taken in response to the crisis. For now, the Fed said it would continue reinvesting proceeds of its asset holdings as they mature.

Fed Chair Janet Yellen holds a news conference to discuss the central bank's views on the economy and monetary policy at 2:30 pm (1830 GMT). She has warned in the past against interpreting the individual interest rate projections as a clear indication of how the policy committee is likely to move.

The composition of the Fed's policy-making ranks has also changed recently, with two new members on the central bank's board and a new head of the Cleveland Federal Reserve Bank, further complicating the message from the forecasts.

In its quarterly projections, Fed officials took into account the sour start the economy got this year after severe winter weather crippled activity in major cities around the country. The government said last month that GDP shrank at a 1 per cent annual rate, and economists say data since then imply a much deeper contraction.

Although growth now appears to be rebounding, there remain weak spots, particularly in the housing sector. Fed officials described risks to the economy and labor market as "nearly balanced."