Why US bonds matter to global markets and you

Treasurys are denominated in US dollars, the main currency used by central banks and major financial institutions around the world.  They allow the US to borrow cheaply to pay its bills and influence rates on home mortgages and many other kinds of loans. 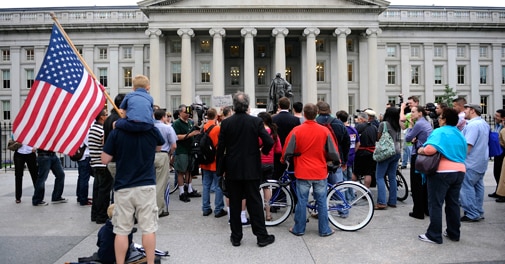 It's no surprise that investors get nervous every time politicians debate raising the US debt limit.

The stock market is the better-known barometer of the US financial system, symbolised by famous companies and colorful traders on the floor of the New York Stock Exchange. But the $38 trillion bond market is a far larger and more important driver of world financial markets.

And at the center of it all: the market for US Treasurys. Treasurys play a crucial role in the global economy. They allow the US to borrow cheaply to pay its bills and influence rates on home mortgages and many other kinds of loans.

Q: What are US Treasurys and why do investors care about them?
A: Treasurys are debt issued by the US government.

The federal government has consistently run a budget deficit for decades, so the United States borrows billions of dollars from investors to pay its bills. It borrows by selling debt in regular auctions. Those auctions are handled by the US Department of the Treasury, hence the name "Treasurys."

The United States is the largest debtor on the planet, owing roughly $12 trillion to public investors.

Investors buy Treasurys for various reasons, but the main reason is safety. The US government has never intentionally failed to pay its debts, so investors consider US debt the safest, and most reliable in times of uncertainty. That debt is held by a variety of investors, including the governments of Japan and China, the largest US creditors.

Treasurys are denominated in US dollars, the main currency used by central banks and major financial institutions around the world. Because the US government owes so much and because investors expect the US government to honour its debts always, the Treasury market is considered the cornerstone of the global financial system.

Q: The "cornerstone of the global financial system?" That seems a bit excessive, don't you think?
A: It's not excessive at all.

Investors weight risk in deciding what to invest in and for how long. Risk determines how much they should be paid for placing their trust in an investment. Risk, in other words, is simply the chance that an investment will not pan out as expected.

Investors treat US Treasurys as a sort of "zero point" that all other investments are calculated against. Even when a solid company like Apple issued debt to pay its bills, Apple is considered relatively more risky than the debt of the United States.

The risks of all financial instruments in the US (and many around the globe) are calculated against the risk of buying US Treasurys. This includes mortgages, bank rates, credit card interest rates, other bonds, etc.

In normal times, the biggest risk to US Treasurys is that inflation could erase any return an investor would make, not that the government could fail to repay its debt.

Q: What's been going on with US Treasurys since the debt ceiling debate turned nasty?
A: Investors have been selling Treasurys that come due around the time the US government hits the debt ceiling, Oct. 17. The fear is that if the US government is unable to borrow and runs out of cash, it might fail to pay back the money if owes, at least temporarily. Most Treasurys that come due in this window are one-month Treasury bills, debt issued in September that comes due in mid-to-late October.

Typically, one-month T-bills give their holders little-to-no return on their investment. For example, the U.S. government auctioned $35 billion in one-month T-bills in mid-September that had a yield of zero - meaning investors were locking up their money with the U.S. government for a month and getting nothing for it. Because they're issued for a short period of time and are considered extremely safe, the reward for the risk is low.

However, because those mid-September bills come due in mid-October, the yield, or compensation, that investors are demanding has shot up. The one-month Treasury bill is now trading at 0.34 percent.

Investors fear they might get stuck holding these T-bills and when they come due, the U.S. government won't have the cash to pay them back. At 0.34 percent, these investments are still considered safe, but it's startling to see investors lose that much confidence in one type of U.S. government investment so quickly.

Money market funds have to hold extremely safe investments because investors expect to get every dollar they invest back. Right now, this short-term debt is too risky for these funds.

Q: Are all investors nervous?
A: No. While bond investors are nervous about the short term, yields for Treasurys that take 10, 20 or 30 years to mature have remained stable during the debt fight. It is a sign that investors are confident U.S. lawmakers can come up with a plan to keep the federal government paying its debts over the long term. The yield on the benchmark U.S. 10-year Treasury note, for example, was 2.73 percent Tuesday, roughly where it was in mid-September when Wall Street began to worry about a shutdown and default.

Q: If the United States were to default, how could it affect me?
A: The biggest threat is that the government would soon fail to make interest payments on its debt. Any missed payment would trigger a default. Financial markets would sink. Social Security checks would be delayed. Eventually, the economy would almost surely slip into another financial crisis and recession.

A default could also translate into higher borrowing costs for consumers, on everything from auto to home loans. Why? Investors would consider U.S. debt a riskier investment and demand more compensation. That could lift interest rates on loans that are tied to U.S. Treasurys -basically everything. It would make borrowing for the U.S. government more expensive, and cost us more as taxpayers.

How much bond yields could rise is unknown.

There's also a counterintuitive argument going around among bond traders that bond yields would fall in the event of a default. The reason is that the global financial system doesn't have something to replace US Treasurys as a "safe" investment. In times of volatility, investors could flock to the safety of US Treasurys, even though the volatility was caused by US Treasurys in the first place.

There's also a strong possibility that a U.S. default may impact bank-to-bank lending.

Banks often use Treasurys as collateral when they borrow from other banks. This "repo" market is massive, roughly $5 trillion by some estimates, and is used by nearly every bank to fund day-to-day lending. Signs have emerged that some banks and money market funds have stopped accepting US Treasurys as collateral, or are requiring more collateral to borrow.

That has started to affect lending. The overnight repo rate on bank loans has risen from 0.04 percent at the beginning of the month to 0.14 Tuesday.

If bank lending rates go up, and if banks have to offer more collateral to borrow, it could slow lending and hurt economic growth.