WikiLeaks founder Julian Assange was arrested by British police on Thursday after they were invited into the Embassy of Ecuador. 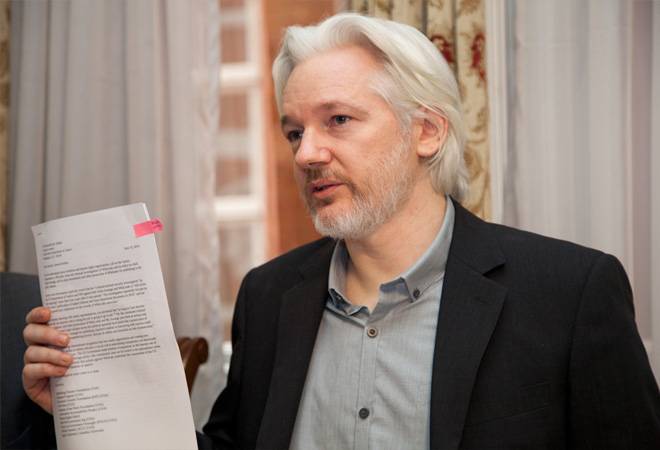 Julian Assange was arrested by officers from the Metropolitan Police Service. File image.

WikiLeaks founder Julian Assange was arrested by British police on Thursday from the Ecuadorean embassy. The police personnel were invited into the embassy after Ecuador withdrew asylum to Assange. He has been staying at the embassy since 2012 to avoid extradition to Sweden where he is wanted for questioning in a sexual assault investigation, reports said.

"Julian Assange, 47, has today, Thursday 11 April, been arrested by officers from the Metropolitan Police Service (MPS) at the Embassy of Ecuador," Reuters reported quoting police sources.

Police said they arrested Assange after being "invited into the embassy by the Ambassador, following the Ecuadorean government's withdrawal of asylum". Videos posted online show police officials taking away a frail-looking Assange with white hair and beard. He has been put under custody at a central London police station and will be produced before the Westminster Magistrates' Court later today.

"The UK must resist this attempt by the Trump administration"https://t.co/fq1JGfw40u

In a tweet after Assange's arrest, Wikileaks posted on its Twitter handle: "Julian Assange did not "walk out of the embassy". The Ecuadorian ambassador invited British police into the embassy and he was immediately arrested."

Julian Assange did not "walk out of the embassy". The Ecuadorian ambassador invited British police into the embassy and he was immediately arrested.

In an earlier tweet, Wikileaks said it has come to know that Assange will be expelled within "hours to days" and Ecuador already has an agreement with the UK for his arrest. Earlier reports quoted Wikileaks' Editor in Chief claiming that the group has discovered an extensive spy network against Assange in the Ecuadorean embassy.

BREAKING: A high level source within the Ecuadorian state has told @WikiLeaks that Julian Assange will be expelled within "hours to days" using the #INAPapers offshore scandal as a pretext--and that it already has an agreement with the UK for his arrest.https://t.co/adnJph79wq

Wikileaks has claimed that Ecuador terminated Assange's political asylum in violation of international laws, which has been refuted by the South American country. The ties between Assange and Ecuador have been strained after he was accused by the latter of publishing details from personal life of nation's President Lenon Moreno.

In a video on Twitter, Moreno said Ecuador has urged the UK to not extradite Assange to any country that has the death penalty. "In line with our strong commitment to human rights and international law, I requested Great Britain to guarantee that Mr Assange would not be extradited to a country where he could face torture or the death penalty. The British government has confirmed it in writing, in accordance with its own rules," Moreno said in the video.