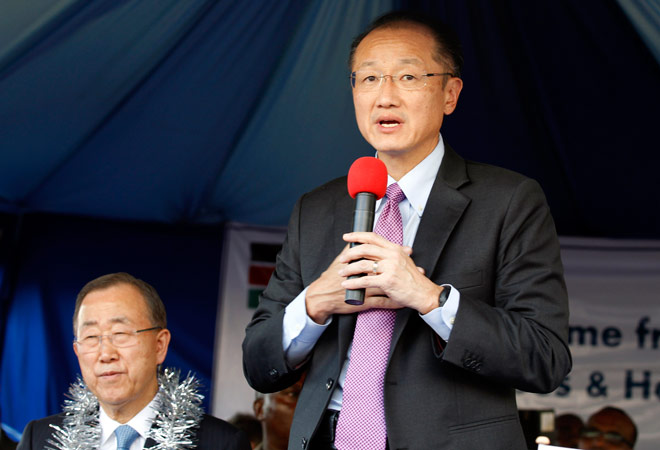 The World Bank has projected global economy to expand by three per cent this year, noting that it is still struggling to gain momentum while many developing economies are less dynamic than in the past.

The global economy grew by an estimated 2.6 per cent in 2014, and is projected to expand by 3.3 per cent in 2016 and 3.2 per cent in 2017, the bank said in a report titled 'Global Outlook: Disappointments, Divergences, and Expectations Global Economic Prospects'.

Following another disappointing year in 2014, developing countries should see an uptick in growth this year, boosted in part by soft oil prices, a stronger US economy, continued low global interest rates, and receding domestic headwinds in several large emerging markets, it added.

"In this uncertain economic environment, developing countries need to judiciously deploy their resources to support social programs with a laser-like focus on the poor and undertake structural reforms that invest in people," said World Bank President Jim Yong Kim.

"It's also critical for countries to remove any unnecessary roadblocks for private sector investment. The private sector is by far the greatest source of jobs and that can lift hundreds of millions of people out of poverty," he added.

Underneath the fragile global recovery lie increasingly divergent trends with significant implications for global growth, the World Bank said in its report.

Activity in the United States and the United Kingdom is gathering momentum as labor markets heal and monetary policy remains extremely accommodative.

But the recovery has been sputtering in the Euro Area and Japan as legacies of the financial crisis linger.

And the oil price collapse will result in winners and losers.

"Worryingly, the stalled recovery in some high-income economies and even some middle-income countries may be a symptom of deeper structural malaise," said Kaushik Basu, World Bank Chief Economist and Senior Vice President.

"As population growth has slowed in many countries, the pool of younger workers is smaller, putting strains on productivity. But there are some silver linings behind the clouds. The lower oil price, which is expected to persist through 2015, is lowering inflation worldwide and is likely to delay interest rate hikes in rich countries," he said.

"This creates a window of opportunity for oil-importing countries, such as China and India; we expect India's growth to rise to 7 per cent by 2016. What is criticalis for nations to use this window to usher in fiscal and structural reforms, which can boost long-run growth and inclusive development," Basu said.

The report said that risks to the outlook remain tilted to the downside, due to four factors.

Third is the extent to which low oil prices strain balance sheets in oil-producing countries and the fourth factor is the risk of a prolonged period of stagnation or deflation in the Euro Area or Japan.