Yahoo CEO Marissa Mayer insists the long-stumbling Internet company has finally regained its stride, even though its revenue is still stuck in reverse. The latest evidence of the challenges facing Mayer emerged with the release of Yahoo's fourth-quarter results. 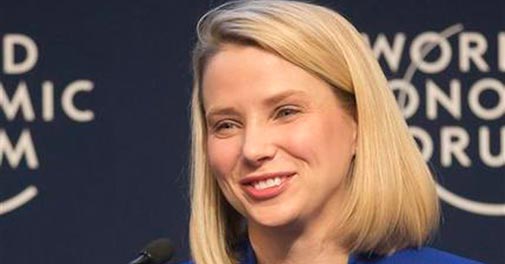 Yahoo CEO Marissa Mayer insists the long-stumbling Internet company has finally regained its stride, even though its revenue is still stuck in reverse.

The latest evidence of the challenges facing Mayer emerged on Tuesday with the release of Yahoo's fourth-quarter results.

While Mayer hailed product improvements that have helped attracted more traffic to Yahoo's services, investors focused on a drop in revenue that underscored the difficulty that the company is having competing for online advertising against Google Inc., Facebook Inc. and other rivals.

Yahoo Inc. had hoped to shift the financial tide when it lured Mayer away from a top job at Google 18 months ago.

Mayer, 38, has succeeded in creating a bigger buzz around Yahoo with her panache and a series of acquisitions aimed primarily at the mobile device market. But the signs of a sustainable turnaround remain elusive. She has repeatedly said it may take several years for Yahoo's ad sales to surge, though on Tuesday she promised a "modest acceleration" in revenue growth during the second half of this year.

Revenue dropped 6 percent in the fourth quarter, the same rate of decline experienced for all of 2013.

Yahoo's earnings have been steadily rising under Mayer's leadership because of cost-cutting measures and lucrative investments in two Asian Internet companies: China's Alibaba Group and Yahoo Japan. Both investments were made before Mayer's arrival. The income from those two investments accounted for nearly two-thirds of the company's earnings during the final three months of last year.

Yahoo's 24 per cent stake in Alibaba has been particularly valuable because the Chinese company is still growing rapidly as it prepares for an initial public offering of stock. Numbers released on Tuesday by Yahoo revealed that Alibaba's revenue surged 51 per cent in the third quarter. There is a one-quarter lag between when Alibaba closes its quarter and Yahoo collects its share of Alibaba's earnings.

Alibaba's allure is the main reason Yahoo's stock has more than doubled since Mayer became CEO.

Some of those gains evaporated on Tuesday as Yahoo's shares slipped $1.12, or nearly 3 per cent, to $37.10 in extended trading after the fourth-quarter numbers came out.

Mayer appears to be getting frustrated, too. Earlier this month, she dismissed Chief Operating Officer Henrique de Castro, who was in charge of the company's advertising. Mayer had enticed him away from Google in late 2012 with a pay package valued at $58 million at the time.

"Ultimately, Henrique was not a fit," Mayer said Tuesday during an online video review of the company's fourth-quarter performance. She added she doesn't plan to replace de Castro in order that she can become more deeply involved Yahoo's ad sales.

Rajan says rate hike not in light of global contagion