The Many Hues of Luxury Shopping

As the number of uber-rich continues to rise, expect heated action in high-end retail in the coming years. Peeping out from under his white cuffs are two watches, one on each wrist. That is not what Olivier Bernheim, the Global President of Swiss luxury watchmaker Raymond Weil, usually does. But, today, in Delhi, he just wants to show off some of his company's latest gear.

Bernheim is the son-in-law of Raymond Weil, the company's founder, and joined the family business in 1982. But he had made his first visit to India even before that, in 1978. On a honeymoon. He has been making trips to India ever since, and along with Weil, handheld many unorganised retailers who were selling from nondescript shops while they transformed to being more organised. The retailers were flown to Geneva, introduced to other brands, and schooled in selling expensive, sophisticated watches.

Until a few years back, most Indians who could afford it, shopped for a watch in Dubai or other foreign destinations. He got a great shopping experience, variety, and possibly, a better price. Much of this has changed. Information has become fluid because of mobile phones and the explosion of social media. Brands cannot indulge in differential pricing. Even as regulations are making luxury shopping more white than grey in India, the shopping experience is improving considerably. Many of the retailers Raymond Weil handheld decades ago have to pull up their socks to remain relevant.

Sample this: In three months, luxury retailer Ethos Watch Boutiques will open a high street store at Banjara Hills in Hyderabad, 5,000 sq. ft-large, and spread over two levels. There will be a 'watch maker's corner' where a range of watches can be opened so that each component can be explained to the connoisseur. An augmented reality corner will help them try out many variants of a model in a virtual mode. Videos on a screen will tell stories about the watchmaker. A bar and a cafe will help settle them down and enjoy the process of buying the timepiece, some of them costing more than a crore.

Raymond Weil is an example of a brand tilting towards new retail. Bernheim now works closely with Ethos, which is changing the game of experience. "For luxury buying, the mood has to be good, the spirit has to be good, and the ambience has to be good," Bernheim says.

Of course, India needs enough and more of luxury consumers. And the number of the very wealthy is indeed growing. 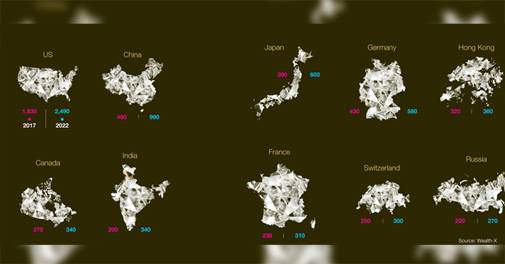 Real estate consultant Knight Frank's The Wealth Report analyses the population of global demi-billionaires - those with $500 million or more in net assets. Currently, India has nearly the same number as France, Russia, and the UK. In the near future, Indian demi-billionaires would overtake all the three countries.

Strong global economic growth and rising asset prices have been considered to be the drivers behind the growth of the super wealthy. By 2022, Wealth-X anticipates that there will be 9,570 demi-billionaires worldwide, up from 6,900 at the end of 2017.

So, it stands to reason that exclusive retail spaces to cater to the wealthy have evolved over the last decade. In India, luxury retailing transitioned from five star hotels to malls - industry watchers call it Luxury 2.0.

The third stage is high street but that is some distance away. Companies such as Ethos and Indian designers are dabbling in it but most international brands prefer luxury malls where the experience is more controlled and brands know who their neighbour is. On high streets, anyone can set up a shop next door, and factors such as harsh weather, pollution, sanitation, and security impede growth.

According to a report by real estate consultant CBRE, 2017 saw about 3.4 million sq. ft of fresh retail space (not just luxury, but overall retail) added across seven key cities in India. A majority of this supply was concentrated in Mumbai, Delhi-NCR, Pune, Bangalore and Kolkata. The first half of 2018 saw an addition of about 1.9 million sq. ft fresh supply in key cities.

Business has picked up over the past four months. Luxury took a backseat after 2015/2016 because of a number of regulatory changes in quick succession - mandate to declare PAN for high-value purchases, demonetisation, limit on cash purchase and GST. The market appears to have realigned to these policy changes.

Nearly a decade before The Chanakya, DLF's Emporio, again in Delhi, set the benchmark in organised luxury retail. "Business for many brands in this mall is up again," says Dinaz Madhukar, Executive Vice-president of DLF Luxury, Retail and Hospitality. 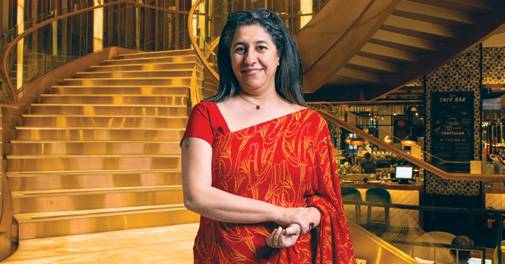 Raymond Weil doubled its numbers in the first eight months of 2018 compared to the previous year. In 2017/2018, Ethos was a Rs 414 crore-company. It booked profits after being in losses for two consecutive years because of the policy hits. Now, the company's CEO, Pranav Saboo, expects to clock Rs 500 crore in revenues this year, or a growth of 21 per cent.

One would have to wait and watch to gauge whether this spurt in luxury sales is sustainable. While the population of India's uber rich is growing, their shopping patterns and choices aren't similar to any other country. And India has not really emerged as a destination for luxury shopping in the way Dubai or Singapore have. There are stiff challenges. Ask Arjun Sharma.

He is Chairman of Select Group, a company that runs Select Citywalk, a popular premium mall in Delhi, and niche hotels. The group is also into tourism and private equity. Sharma doesn't really see himself as a consumer of luxury; he drives a hybrid, a white Toyota Camry, more as a statement on sustainability. Luxury, to him, is wearing an Apple watch and spending time with family. Nevertheless, he is clued in to what works and what doesn't.

"Globally, luxury has survived in key markets such as Dubai or Singapore or the UK not because of the local community but a strong tourism community," says Sharma. "Probably, about 55-60 per cent comes from tourism consumption in these countries. Unfortunately, in India, we dont have that size of tourism economy to justify it. People don't come to India for shopping. If it's shopping, it is more around handicrafts, carpets, jewellery, which is more artisanal rather than a foreign-branded product," he adds.

The Indian Hotels Company Limited (Taj Hotels) probably realised this before anybody else. Taj Khazana, the first branded store by a hotel in the country, opened in 1979 as a celebration of India and her cultural diversity - Taj hotels today work directly with artisans and weavers to aggregate Indian fashion. "We have 12 stores now. The graph looks good. We have been growing at 20 per cent (year-on-year)," says Faisal Momen, Vice-president of Taj Khazana. The stores are only in Taj hotels and differentiate on trust. Buying genuine Indian artisanal products, particularly, if you are a foreigner, can be a slippery slope. "I think the grey market is very buoyant. Thanks to the Taj, we have an inherent trust. The pashmina we sell, the jewellery we keep - we display prices on jewellery. Transparency leads to credibility," Momen says.

Credibility was an issue in watch buying, as well as with other luxury items. Organised retail changed that quite a bit over the past few years. Selling to Indian consumers, however, has other challenges. Their buying patterns, for instance.

"Even when you compare luxury retail in Indian malls with a country like Singapore, India is far behind. The per square feet sales productivity of a luxury mall in Singapore is at least four times higher than the Indian luxury malls," says Bijou Kurien, Strategy Board Member at L. Catterton Asia Holdings. LVMH and Groupe Arnault partnered to create L Catterton in 2016. The private equity company invests in premium brands. Kurien is a former President and Chief Executive of Reliance Retail (Lifestyle).

A lot of this has to do with the notion of luxury that Indian consumers have. In India, weddings are a luxurious affair and some people can spend crores on the ceremonies, food and venue. "When it comes to the wedding outfit, the groom will prefer to get a sherwani stitched by a local designer and the bride will probably buy an expensive lehenga and heavy jewellery from local designers. They wouldn't invest in a high-end piece of jewellery from Tiffany or a Burberry suit," Kurien says. "A suit or jewellery from a global luxury brand has limited market in India. They are more than happy to buy bridge-to-luxury products (priced between Rs 10,000-50,000) which can be used more often," he adds. The challenges on the tourism front and domestic consumption have forced luxury retailing to develop many nuances in the country. One of them is the inter-dependence of pure-play luxury malls with the premium ones. There are, of course, very few pure-play luxury malls in India. There are two, and both are in Delhi (DLF Emporio and The Chanakya). Other borderline luxury malls are Palladium in Mumbai, UB City in Bangalore, and Quest in Kolkata. Two more malls are coming up in Mumbai. One of them is expected to be a uber-luxury one while the second one, by Oberoi Realty in Worli, would play on that inter-dependence.

"The Emporio and Promenade malls sit beside each other in Delhi and it is built as a complex," explains Madhukar of DLF Luxury. "Promenade has all the premium brands while Emporio has the luxury ones. The two malls complement each other." There is a flow-through between the malls and DLF encourages that. "From Monday to Thursday, it is the pure Emporio customer who shops. The weekend crowd comes from Promenade. The ticket size drops over the weekend but conversion is still happening. Those coming from the Promenade mall are experiencing Emporio. We need that. The number of people who want to buy luxury needs to grow exponentially," she says.

Vikas Oberoi, CMD of Oberoi Realty, echoes that view. The company runs a premium mall in Mumbai's Goregaon. When the mall started 10 years ago, 20 per cent of the tenants were bridge-to-luxury brands. Today, that has grown to 90 per cent. "Perfumes, sunglasses and watches have a longer shelf life and they are not too expensive. While I may not buy a Dior bag, which is expensive, I might start with a Dior perfume or a sunglass, which gives the consumer a sense of arrival," he says. "I am trying to get customers used to this sort of pricing and quality and then slowly upgrade." The company's new mall (in Worli) will be positioned higher than the Palladium, Oberoi says. "We will have eight 40-60 seater dine-in cinema (halls). It will be a blend of uber luxury, luxury and bridge-to-luxury brands," says Oberoi. "There is no sense of ego in an uber luxury brand anymore," he shares, rather bluntly. "The brands have to be humble; they have to be around other brands. The wardrobe of the richest people in the world may have a lot of uber luxury. But they will have bridge-to-luxury also. They buy from Zara as well as Dior."