India Today TV organised The Mining Debate'-a power-packed panel in Goa to discuss the state of mining, whether mining can be restarted-and how? Can the collateral damage on humans, business and the economy be contained? 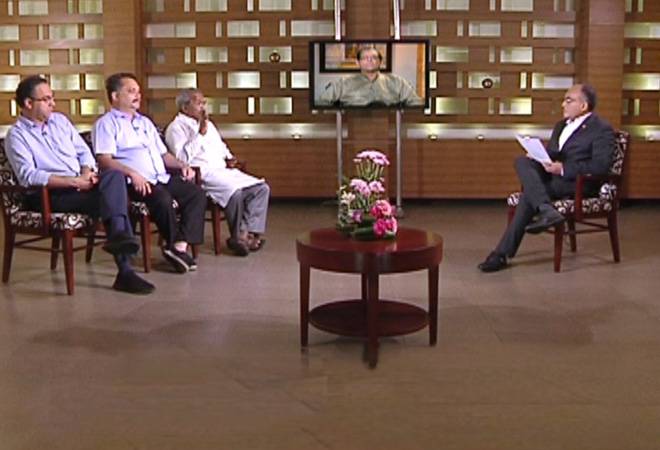 Mining stalled in Goa ever since the Supreme Court cancelled 88 mining leases in the state on February 7, 2018. The decision directly impacted 60,000 households & 3 lakh livelihoods. The ban has stopped 15 million tonnes of iron ore exports. It has disrupted an entire ecosystem of allied industries, including logistics suppliers, truck companies and barge owners as well as equipment suppliers.

India Today TV organised The Mining Debate'-a power-packed panel in Goa to discuss the state of mining, whether mining can be restarted-and how? Can the collateral damage on humans, business and the economy be contained?

The panel of the most influential in Goa's mining industry included Nilesh Cabral, Minister of Power, Non-Conventional Energy, Law & Judiciary and Minister of Legislative Affairs; Francisco Sardinha, Member of Parliament from South Goa, Ambar Timblo, Managing Director of Fomento Resources & President of Goa Mineral Ore Exporters' Association and Puti Gaonkar, President of Goa Mining People's Front. It was moderated by Rajeev Dubey, managing editor, business, TV Today Network and Editor, BusinessToday.in. Gaonkar outlined the enormous socio-economic impact of the ban saying, "The economy of Goan state was depending on mining. More than 60,000 were employed directly. There were other mining dependents, such as trucks owner, machinery owners, barge owners, port. After the stoppage of the mining in Goa, the economy is punished, workers are suffering and there is no income".

At the time it was banned, mining was Goa's largest industry. Cabral believes the Goan economy is badly impacted, "Goan economy was contributing to the national economy. We lost Rs 3,500 crores in the first year itself. Subsequently, may be reduced to Rs 2500 to Rs 2000 crore. As of today, if mining does not start, the State government will have impact on all activities, that is development activities, even the government salaries will come to a standstill."

Sardinha considers this a state responsibility: "I would blame the State government, because when the late Mr. Parrikar was the Chairman of PAC, Public Account Committee and at the same time, there was there Shah Commission, they made hue and cry saying that illegal mining to the tune of Rs 35,000 crores was done and people had made money. Soon after that, he came down to Rs 3500 crore and finally, he was saying only about Rs 350 crores. Even Rs 350 crores is not a small amount. Why nobody is behind bars?"

The question is: can mining be restarted?

Gaonkar is convinced mining can be restarted even today: "My view is different. Even now they can start mining. Supreme Court has never banned mining. Supreme Court has said that mining should restart. How to restart, whether to give fresh (lease). There is a judgement of 1998, which is three bench judgement, where it says that mining should continue till this matter is disposed off. And the Lokur judgement was two bench judgement. Even on this basis, the State government can start the mining till the matter is over."

But that's not how Sardinha sees it. He says the matter is beyond the scope of state government, only Centre can come to the rescue: "State government had already passed a legislation and sent to the Government of India to resume. So they should take measures. Maybe ordinance." Gaonkar reminded that 88 leases were cancelled, but there were 506 leases in Goa.

Timblo then outlined the crux of the problem: "We have two acts. One which gives us birth which is the Abolition Act and one which has now recently been extremely modified which is the 2015 Act. 2015 Act gives everybody in India the right to have 50 years of lease period or the period of the renewal, or till 2020, whichever date is the furthest. Supreme Court says I don't know when 50 years start for you. I am saying that you don't have the power to renew, but other states have the power to renew, one state is then stepfatherly treated. The union has recently said to the court that because their original rights under the Portuguese concessions are still before us, we cannot allocate this to any other person till that matter is decided. So you are neither here nor there."

"When the new mining act came into place, this state government represented before the union government (that) there seems to be a mismatch between what was the abolition act and what is this new mining act. It is imperative for us to harmonise so that the intent and spirit of both the acts represent. They said we have to give clarity to state that the date of grant of the mining leases in Goa is the date the abolition act came into being, which in 1987. Because this is not a switch-on, switch-off industry," says Timblo.

The solution, says Gaonkar, was either amendment to the Goa, Daman & Diu Act or the MRDA Act. "Ours is a concession, Goa was never under lease. It was converted to lease by special act Goa, Daman & Diu Mining Concession Abolition Act in 1987. And this act was challenged in the High Court and Supreme Court, where it is held that their provisions will be prospective and not introspective. We urged the Central and State government to amend this act, make it prospective and make it from 23rd May 1987 so that mining can be continued till 2037, but the Central government has said we will have legal solutions. I feel they have some alternate motive." On Congress Party's stand on bringing legislative changes to restart mining, Sardinha said, "I cannot speak in terms of the party. I will also try to convince my party. Their main aim is to see that unemployment goes down, people of the state are happy. As far as I am concerned, I will give the government full support to restart mining in the state."

On the long-term solution, the panel was unanimous. "The legislation cure is required," says Cabral. "If the government decides in the interest of the State, then it should be in such a way that we are protected from all fringe elements going back to court. I think giving the mines, like all other states, to a certain area of this 123 leases is very important. We should work to restart these 123 tomorrow. And look at the perspective of other 400 leases in the future of auction and getting revenue to State and the Centre."

Timblo believed the clarity of tenure, visibility for the industry is important for all people to bank their future in the business. "As we have been tested in the Supreme Court twice and what has been found is if we have come up with a more, solid statutory legislative backing to ensure that the ability of interpretation is not left on matters. It will ensure that we cannot be stopped the way we have been stopped the last two times. The intent of the government to restart mining, I have seen."

It is now a matter of making the required legislative changes and the representations before the Supreme Court to ensure that the collateral damage of the ban can be contained to bare minimum.

ICAR result 2019 to be announced today on ntaicar.nic.in; here's how to check score