Govt gets wake-up call from RBI on IDBI Bank's health: A sneak peek into financials of state-owned lender

Government-owned IDBI Bank is in news again after a report said Reserve Bank of India (RBI) has informed finance ministry about the poor financial position of the bank and urged the government to take remedial action.

Government-owned IDBI Bank is in news again after a report said Reserve Bank of India (RBI) has informed finance ministry about the poor financial position of the bank and urged the government to take remedial action.

"It was found out during our inspection that the bank's mechanism for identifying bad loans is also deficient," the ET quoted the RBI as saying in its letter. The central bank thinks that IDBI's non-performing assets could be higher than what's been reported.

The lender in which the government has 77.79% stake said one fourth of its loan book turned sour for quarter ended December 2017. The bank reported 24.72% of gross non-performing assets (NPAs) ratio in Q3 of current fiscal. The ratio was the highest among its peers. 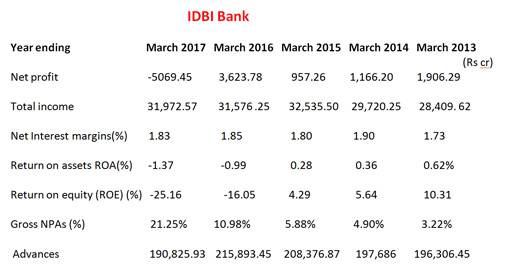 The government has decided to sell a part of its stake to move toward privatisation of public sector bank. On January 24, 2018, FM Arun Jaitley said the decision would be taken at right time.

As part of the government's Rs 2.11 lakh crore recapitalisation plan, the lender was allocated Rs 10,610 crore in FY18, the highest among the state-run weak banks.

Announced in October 2017, the capital infusion would be spread over two years, including Rs 1.35 lakh crore worth recapitalization bonds.

Last year in May, IDBI Bank became the first lender to be put under a revised prompt corrective action (PCA) for its high non-performing assets and negative return on assets.

A bank is placed under PCA framework based on the audited annual financial results and RBI's supervisory assessment. A month before putting IDBI under PCA, the central bank had made it clear that the banks' capital, asset quality and profitability would be the basis of the PCA framework on which the banks would be monitored.
The bank had said the action would be taken when a bank breaches the risk threshold that includes restriction on dividend payment/remittance of profits, restriction on branch expansion, higher provisions, restriction on management compensation and director's fees.

For the fiscal ending March 2013, the ROA ratio stood at 0.62%. It gradually fell to 0.28% for the fiscal ending March 2015. In the next fiscal, the ratio entered negative territory and reached -0.99%.
During the last fiscal, the ratio worsened further to -1.37%.
The bank's return on equity (ROE) ratio saw similar trend during the last five fiscals. The ratio is the net income of a business during a year to its average shareholders' equity during that year. It is a measure of profitability of shareholders' investments. It shows net income as a percentage of shareholder equity. Higher values are favourable which denote the company is efficient in generating income on new investment.

Net interest margin is equal to the difference of investment returns and interest expenses divided by average earnings on assets. It stood at 1.83% at end of March 2017. In March 2016 fiscal, the figure stood at 1.85%.

The bank reported a fifth straight quarterly loss for the quarter ending December 2017 on a rise in provisions for bad loans.