According to a Motilal Oswal Institutional Equities report, India's nationwide lockdown comes at a time when power demand has largely remained muted; 1.5 per cent in the first eleven months of FY20

Even as coal production by Coal India hit its highest in 60 months in March, coal dispatches declined 10.3 per cent year-on-year to 53.5 million tonnes during the same month. The decline came due to a sharp fall in power demand on account of a nationwide lock down.

At 84.4 million tonnes (MT), coal production grew around 7 per cent y-o-y in March, while dispatches declined after a three-month of consecutive y-o-y growth. Historically, monthly coal dispatches have remained above 75 per cent of the total monthly production since 2015, but slipped to 63 per cent this month. For the full fiscal year, the company's dispatches slipped (4 per cent y-o-y) for the first time since the data was available, that is 2014/15, while production declined around 1 per cent to 602 MT during the same period - the first contraction in last 21 years. According to a Motilal Oswal Institutional Equities report, India's nationwide lockdown comes at a time when power demand has largely remained muted; 1.5 per cent in the first eleven months of FY20. Meanwhile, production at Coal India's mines has been ramped up following a heavy monsoon season. Accordingly, inventories at both coal mines and power plants have risen - a general trend at the onset of summer, but higher than usual. On the other hand, with industrial and commercial consumers accounting for nearly 50 per cent of India's power demand, generation has been severely dented over the past one week.

India's power demand has declined sharply as the nation is under a lockdown. Between March 22 and March 30, power demand declined around 21 per cent compared to daily three-year averages (2017-19). In fact, following the countrywide lockdown between March 25 and March 30, the decline stood steeper at around 25 per cent. In contrast, for the first 21 days in March, demand was up by 2.5 per cent, adds the report. 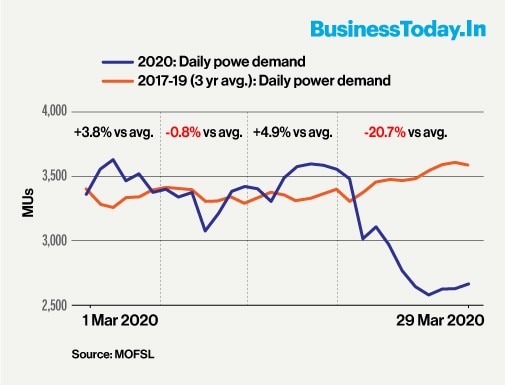 Furthermore, given the must-run status for renewables in the country, the brunt of the demand decline is being borne by coal-based plants. Generation from coal-based plants fell approximately 40 per cent y-o-y over March 25th -30th. On account of such a sharp demand drop and higher coal inventories at power plants, we build in lower dispatches for coal in FY21, the report added further.