To shore up pandemic-ravaged revenues, leading multiplex chains are taking popcorn and other cinema food outside the theatres through online channels. Will it work?

There is an old saying that the best place to build a movie theatre is where the popcorn sells. But now multiplex companies PVR and INOX Leisure are taking popcorn and other food items beyond movie theatres to customers at home through online channels to beef up pandemic-ravaged revenues.

When movie theatres and their kitchens were allowed to reopen with restrictions last October, the multiplexes ran online delivery trials of popcorn—which brings in roughly 15-30 per cent of overall F&B revenues in normal times—and a few other cinema staples like colas, sandwiches and nachos. Between the two waves, PVR and INOX went live with these on Swiggy and Zomato. PVR also took its microwaveable popcorn to Amazon in July 2021. 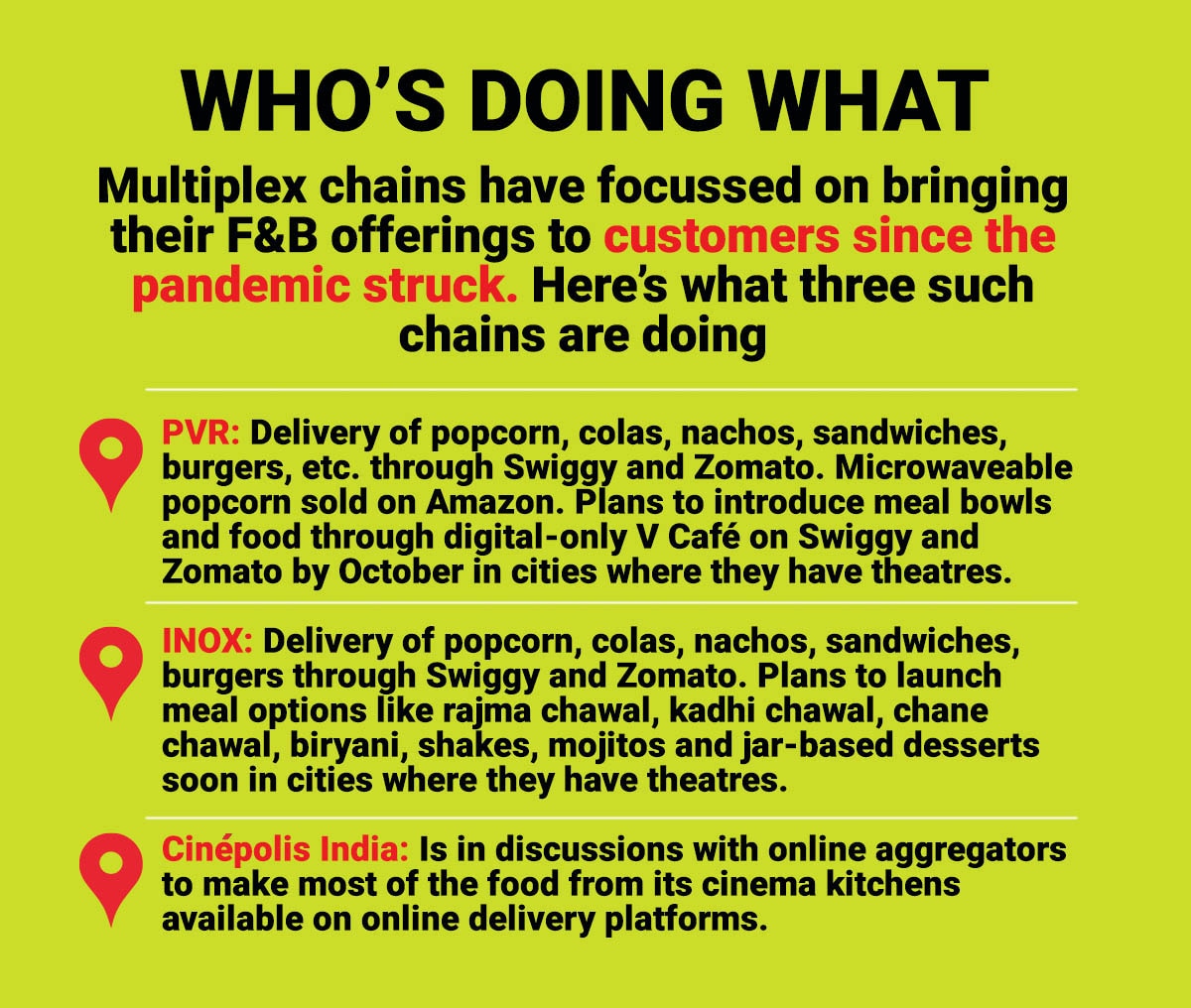 Now the multiplexes have big plans. They want to be seen as F&B players. PVR says it sold 300,000 units of its PopMagic microwaveable popcorn from cinemas and food delivery platforms during a three-month trial. “Encouraged by that we thought, ‘Why can’t we have a food brand that caters to consumers? We will cook at the cinemas but cater beyond.’ That’s when we came up with V Café, which caters to consumers on Zomato and Swiggy,” says PVR CEO Gautam Dutta.

We have to serve an audience that has the choice to go to anyone. I have to give you enough reason [to come to me]

A different menu compared to what is served in cinemas, with options like meal bowls, hot-dogs, pizzas, a new brand of teas and coffees, collaboration with a plant-based protein brand run by actors Genelia and Riteish Deshmukh are all in the works for V Café, he adds. “We also plan to list on more e-commerce sites, and there will be direct-to-consumer selling through our own website and app.” PVR will go full throttle on this once cinemas reopen everywhere, which Dutta estimates will be by October. “Just microwave popcorn will be a Rs 15-20 crore portfolio in the first year and will grow much bigger as we move forward,” he says. PVR, which also owns the 4700BC gourmet popcorn brand, reported Rs 960 crore in sales from F&B in FY20.

INOX Leisure plans to make rajma chawal, chole chawal, chane chawal, biryani, popcorn shakes, mojitos, juices and jar-based desserts at its kitchens and sell them online in a few weeks. As of now, it sells popcorn, nachos, sandwiches and burgers online. “We are in the early stages of awareness creation, but we are already witnessing encouraging response from patrons… It has given us confidence that other foods will also do well,” says INOX’s CEO Alok Tandon. INOX made Rs 497 crore from F&B sales in FY20.


[In future] online food delivery won’t be just additional revenue... F&B will have a higher contribution in the pie

Cinépolis India, the Indian subsidiary of the Mexico-headquartered multiplex chain, is also working on listing most of the food items sold at its in-cinema Coffee Tree gourmet cafe on Swiggy, Zomato, Amazon Food and BookMyShow for home delivery. “We are just a click away from starting it. But we need to make sure how much demand there is and how we can start supplying the product such that it can be enjoyed the same way it is enjoyed in cinemas,” says Devang Sampat, CEO, Cinépolis India. Zomato and Swiggy did not respond to Business Today’s detailed questions.

The plan to expand the F&B business was always there but the pandemic gave it an impetus, insist Dutta and Tandon. That would be logical since multiplexes hardly make any money by selling movie tickets. The revenue share is roughly a third each between the producer, the distributor and the multiplex in most cases. Plus, multiplexes have to bear exhibition costs. It’s also no secret that you overpay for food at the movies. A visit to the theatre with a friend would easily set you back by at least Rs 800. A large tub of salted popcorn and two cans of a fizzy drink would cost around Rs 350. Tickets would work out to another Rs 500. In contrast, 300 gm of classic salted microwaveable popcorn and two cans of beverage bought at a store would cost around Rs 150. The pricing works because the audience has no choice.

“The per-screen F&B revenue we generate is perhaps the highest in the world—we make Rs 1.31 crore. The largest movie theatre chain, AMC Theatres, gets around Rs 1.25 crore. It clearly indicates people are really enjoying our food,” says Dutta. This means there’s scope for traction outside the cinemas as well, he adds. “We [movie theatres] are the first to open and last to shut and that’s the window we get to serve our patrons. So, why not try more ways of selling food?” asks Tandon. Besides, Cinépolis’s Sampat says there is room to increase F&B’s contribution to overall revenue. For Indian multiplex chains, the ratio of spend per head to average ticket price is 40-50 per cent. That is, for every Rs 100 a moviegoer spends on tickets, she spends Rs 40-50 on F&B.

F&B sales outside cinemas through online channels are not going to be significant for sure. But any additional revenues within the setup you already have helps in profitability

“These multiplexes don’t see themselves just as box-office companies. They see how to get the most out of a customer’s wallet,” says Abneesh Roy, executive director, Edelweiss Securities. As he says, INOX and PVR are large F&B players anyway. With 600-700 screens each, they have that many outlets. “Every company with a presence in F&B will think of how to scale up.”

But all these are about food consumed inside the cinemas. Take the same food outside, where there is no movie to keep you occupied. Will it still work? PVR’s Dutta says they’ve corrected the F&B prices for home delivery. “It won’t cost the same as food inside the theatres. We’ve measured our quality, package size and what is available in the market, and priced it in a manner such that the consumer finds a big and strong reason to order from us.”

A 255-gm PopMagic pack of three sold by PVR costs Rs 269, while rival Act II Popcorn costs almost half for the same quantity. “That’s because we use corn imported from the US. Ours is of superior quality,” says Dutta. INOX’s Tandon says the food will be priced roughly the same as inside the cinemas. “We are offering unique food. It’s just the extension of our food service in the cinema lobby.”

The rationale seems to be that raw material sourcing and kitchens are in place, Swiggy and Zomato are around to provide last-mile delivery for a fee, so why not try to boost F&B revenues? Gaurav Jain, partner at consultancy firm Ormax Media, says it has been a painful year-and-a-half for multiplexes. “So, you try to find adjacent businesses, some kind of forward or backward integration, to build on economies of scale. Your expertise in one business will rub off on the other because it’s not completely new to you.” He says given their capacity to serve F&B at multiplexes, nothing stops them from reaching out to audiences at home. “It helps in driving revenues in times like these when multiplexes are shut for long, and when they reopen, there will be capacity restrictions.”

Initially, the idea is to tap into the existing customer base that is familiar with the multiplex chain’s food. Tandon says they keep engaging with customers who are part of their loyalty programme. “INOX’s endeavour in the long run is to increase F&B contribution in overall revenue to 35 per cent from the current 25 per cent. With the traction we are seeing now, things will improve not just by selling online, but by expanding the menu and giving more importance to F&B.”

Dutta says the reach will be massive given that PVR entertained 100 million people annually pre-pandemic. “These are the first tiny steps into retail. Over the next three-five years, this could become huge. F&B has the strength to get into many smaller cities and towns beyond where PVR has a presence because of online deliveries. Online sales could stand up as a different business pillar for PVR in a big way.” However, Sampat of Cinépolis differs. He sees the benchmark for online sales of F&B at 30 per cent of total sales given that that’s the number most restaurants do these days. It may start slow, with 2-3 per cent of sales, he adds. “But any additional revenue within the given setup helps in profitability.”

Karan Taurani, senior vice-president and research analyst at Elara Capital, agrees. “It’s a very minuscule part of revenue that can go up through these additional channels,” he says.

And taking F&B online essentially means competing with the thousands of restaurants already listed on Swiggy and Zomato. “For those restaurants, food is the main business. But that’s not the case with multiplexes. Differentiation is key if they have to stand out,” says Roy of Edelweiss.

“It will be a very small customer base that will want to call for food from PVR and INOX instead of a restaurant, which has a brand positioning in the food it offers,” says Taurani. He sees it as a strategy to vet assets to compensate for losses at cinemas, which are open but aren’t seeing footfalls. “This isn’t sustainable in the long term.”

Depending on whether you ask a multiplex chain or an analyst tracking the space, footfalls could return to pre-Covid-19 levels anywhere between the festival season starting in October and the middle of 2023. It’s anybody’s guess because there’s a combination of factors at play—vaccination effectiveness, a possible third wave, good content worthy of venturing out, occupancy caps, night curfews, etc. Is the online experiment here to stay or is it just an additional source of income for multiplexes on their long road to recovery?

As is typical of innovations to bring in extra revenue, Jain says, some succeed, some fail. Can it sustain revenues on its own or will it take a back seat once things open up for their main line of business—cinema exhibition and over-the-counter F&B sales—we’ll find out, he says. “There is no harm in exploring a new business category.”