The BT-KPMG Best Banks and Fintech Survey 2022 definitively demonstrates the strong comeback of India’s banking sector, with high profits and low NPAs. But there are new challenges on the horizon
By: Anand Adhikari

In a world filled with doom and gloom, the commentary for the Indian banking industry—with assets of Rs 216 lakh crore—is growing better and better every day. There is no threat to financial stability, as there was in the aftermath of the IL&FS collapse or the Russia-Ukraine war. The banking system is profitable, growing and adequately capitalised.

The net profits of the sector have performed a somersault of sorts—from a loss of Rs 23,397 crore in 2018-19 to a record Rs 1.82 lakh crore of profit in 2021-22. In the first half of FY23, net profits have registered 40 per cent-plus growth compared to the corresponding period last year. The Reserve Bank of India’s latest stress test on banks, the life blood of the economy, shows that India’s banks would be able to withstand even more severe stress conditions. The gross non-performing assets (GNPA) of banks have almost halved to 5 per cent from the highs of 2018, and they have built a strong NPA provisioning coverage ratio of more than 70 per cent.

The temptation for banks to grow fast and capture growth opportunities is quite visible now. But they have to tread carefully since rising interest rates and inflation are likely to knock borrowers’ affordability and repayment capabilities, alongside several other challenges. 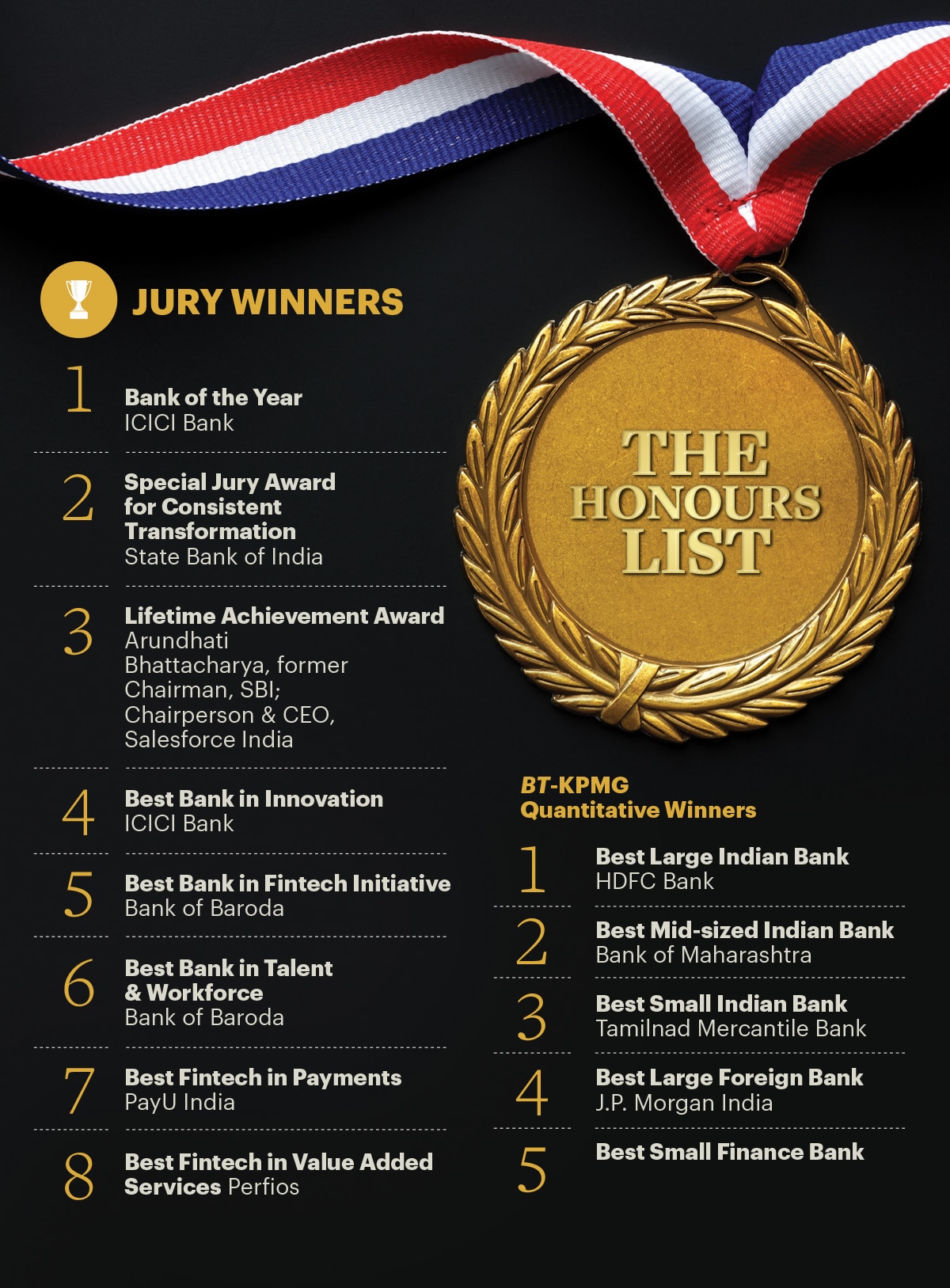 The first big challenge is sustainability of the current loan growth. After remaining in single digits for the past three years, bank credit growth reached a high of 17.5 per cent in December 2022, the highest in over 11 years. In recent years, consumer banking has been the main driver of bank lending, but there have been encouraging signs in wholesale lending as well, especially in infrastructure, PLI-related sectors, renewable energy, and MSMEs. According to Jitendra Upadhyay, Senior Equity Analyst at Bonanza Portfolio Management, the banking sector is currently in one of its best periods, and public sector banks (PSBs) will be able to participate significantly in the credit up-cycle due to cleaner and stronger balance sheets. “Private banks will get tough competition from larger PSBs,” says Upadhyay.

Given the global downturn, its effect on exports, and inadequate capacity utilisation of corporates that inhibits future expansion, the sustainability of this growth surge is in doubt. Some segments like unsecured personal loans, credit cards, business banking and MSMEs are also risky for banks. “Stress is already seen in some sectors, like textiles (due to high cotton prices and less export demand), gems and jewellery, etc. Most fresh slippages for banks in Q2 of FY23 are from the MSME sector. Part of these loans are from an already restructured category, suggesting continued stress in the sector,” says Manu Rishi Guptha, Founder & CEO of MRG Capital, a portfolio management services (PMS) firm. According to Naveen Kulkarni, Chief Investment Officer at Axis Securities PMS, although credit growth is on track, the danger of a delayed pick-up in the capex cycle may possibly impair its momentum.

Another challenge for banks will be on the funding side, as they are already drawing down on their high-quality liquid assets to fund credit growth. In fact, banks have been holding their liquidity coverage ratios (or LCR, which is investment in high-quality liquid assets that can be easily liquidated)  in excess of 150 per cent (the regulatory minimum is 100 per cent) by investing in short-term debt to take care of sudden outflows by depositors and other investors. As against banks’ credit growth of 17 per cent, the deposit growth year-on-year is in the region of 9.4 per cent. “Banks should keep an eye on the gap between credit and deposit growth,” says Kulkarni.

At some stage, banks will also have to increase their deposit rates. While capital levels are comfortable, they will have to raise additional capital in the near future. Some banks have taken prudent decisions when loan growth slowed in recent years. For example, State Bank of India kept its deposit engine running by deploying the surpluses in its treasury. “We have got almost about Rs 3.5 lakh crore-plus money that is lying in treasury instruments, which we expect to redeem during the current financial year itself,” SBI Chairman Dinesh Khara told investors recently.

The deposits market is seeing fierce competition. For instance, a small finance bank like AU Small Finance Bank gets deposits from urban centres even though its lending markets are semi-urban and rural areas. Similarly, regionally-focussed Bank of Maharashtra changed its strategy a few years ago to have at least one branch in each district (approximately 760) by 2023-24. The results have pleased A.S. Rajeev, MD & CEO of Bank of Maharashtra: “We had seven branches in Kerala with a total business volume of around Rs 350 crore, which has now jumped to 30 branches and Rs 7,500 crore of business.” 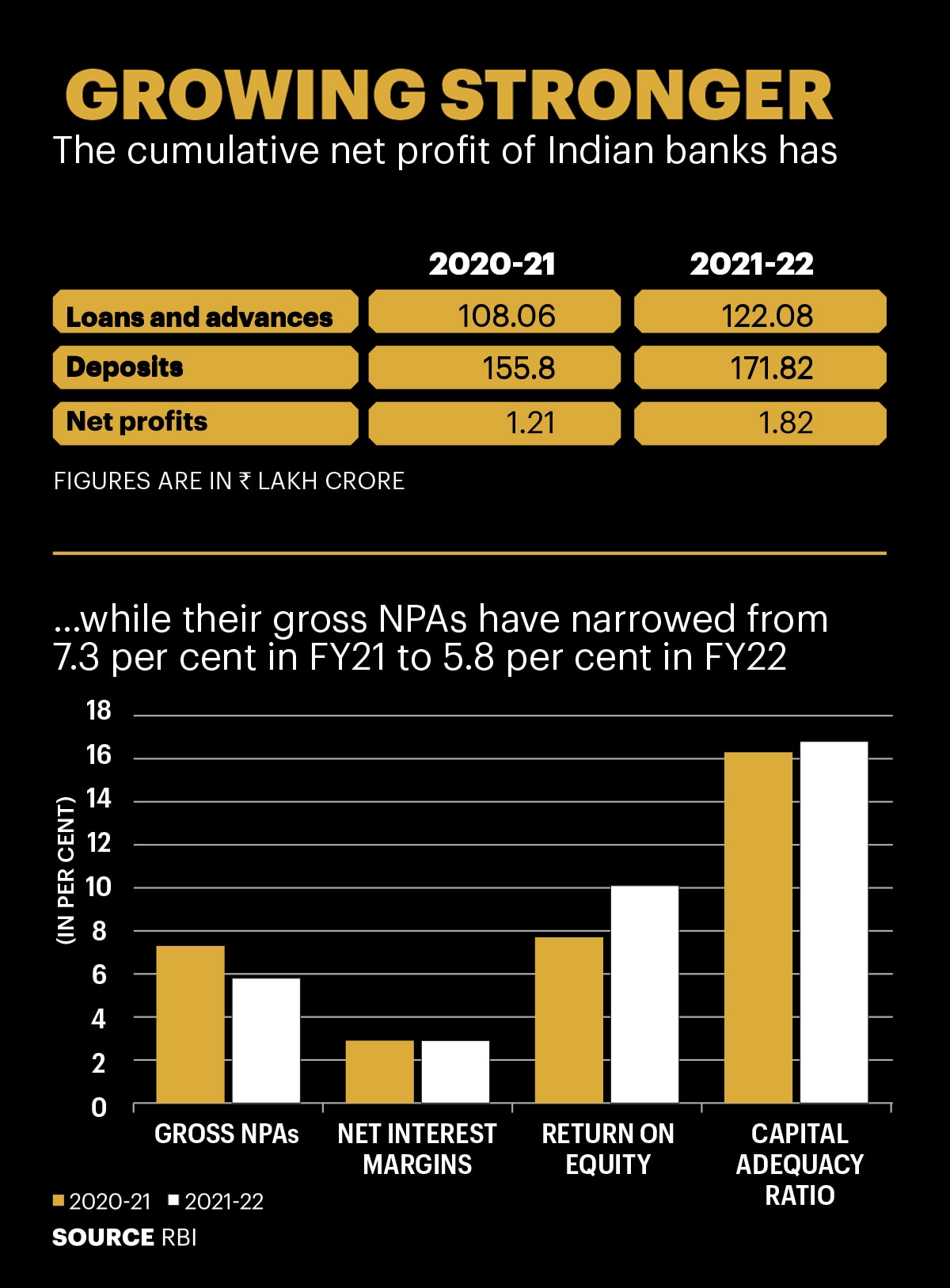 Rising interest rates would hurt borrowers. But banks, which immediately pass on the increases, make more money because their net interest margins (NIMs) go up. On the other hand, higher yields in the G-Secs market expose banks to mark-to-market (MTM) losses on treasury investments. But the RBI recently said that the impact of rising yields on banks’ profitability has been mitigated to some extent by the increase in the limit of SLR (statutory liquidity ratio) securities under the held-to-maturity (HTM) portfolio.

Meanwhile, large tech firms are presenting an increasing threat to banks. Google Pay and PhonePe now hold most of the market share in the payments arena. Paytm is awaiting a full-scale licence to start lending on top of its growing payments business. In fact, the fintechs are innovating a lot in the payments space especially for merchants and kirana stores. So, the banks have to continuously stay ahead of tech to capture the new emerging opportunities, as GST returns and formalisation have created a new market for payments, savings, investments and lending.

To counter the disruption from new-age players, tech-savvy institutions like ICICI Bank, HDFC Bank, Axis Bank, Kotak Mahindra Bank and Bank of Baroda are building a new, ever-evolving technological architecture. RBI Governor Shaktikanta Das recently said that the future of banking would witness a major shift in customers’ choices and preferences with enhanced expectations from the banking industry. Also, according to experts, there is likely to be competition from big NBFCs like Bajaj Finance and new ones from the Piramal, Poonawalla and Godrej groups. These NBFCs are focussing on a low-cost operating model with fintech partnerships.

“Technology should not be seen in isolation. It is here to support the bank’s strategy and help drive business,” says Sandeep Batra, ED at ICICI Bank. Banks have no option as customers are now demanding frictionless banking at their fingertips. ICICI Bank has already increased its technology spending, which accounts for 9 per cent of its operating expenses. The bank doesn’t see this coming down in the near future.

Cybersecurity is the most significant unknown risk to the banking sector. “If there is one risk that keeps managements awake, it is cyber risk,” writes Amit Wagh, Partner, Business Consulting–Financial Services, KPMG in India, in his column (see page 86). The collaborative approach used by banks and fintechs has exposed the system to third-party scrutiny. The thousands of APIs linked to the banking system are also creating vulnerabilities. The expansion of digital banking will need a strong defence system and the ability to respond quickly.

The regulator is now super active in terms of surveillance on banks and their risky business models, as it doesn’t want any bank failures. The regulator is already forcing banks to have a robust risk management framework and board-approved policies, especially for risky bets on unsecured loans or MSMEs. Some experts suggest that banks are trapped between meeting regulators’ demands and shareholders’ expectations of returns. Striking a fine balance will be the biggest challenge for banks in the near future.