Even as its conventional oil and gas business reorients itself in an uncertain world, Reliance Industries Limited’s focus on new-age ventures like retail and telecom is whetting its appetite for growth
By: Krishna Gopalan

The outbreak of the Covid-19 pandemic in March 2020 set businesses back like very few calamities in the past ever have. It was time to reorient business models. Survival became the mantra. In the midst of the storm, India’s largest private sector enterprise, Reliance Industries Limited (RIL), spent a good part of the time raising investor money for its telecommunications and retail businesses. For calendar year 2020, investments were raised to the tune of $20 billion for its digital services arm Jio Platforms, followed by another $6 billion for Reliance Retail Ventures. The message was two-fold. The investors were convinced about RIL’s story. And also about India’s long-term story. And there were impressive names among the investors, including Facebook, Google, TPG, Silver Lake, KKR, Abu Dhabi Investment Authority (ADIA) and Saudi Arabia’s sovereign Public Investment Fund (PIF). Importantly, RIL’s Chairman and Managing Director, Mukesh Ambani, put out a statement in June 2020 that the company was net debt-free. It allayed the fears of those who were apprehensive about a highly leveraged balance sheet, thanks to a series of investments in the company, plus RIL’s own rights issue.

The journey of the transformation of RIL into a company with a robust set of new-economy businesses has been underway for a while now. Going from textiles to plastics to oil and gas exploration to refining, the conglomerate has in recent times been looking at new businesses relevant to the times, such as retail, renewable energy and telecom. The renewable energy foray was announced with much fanfare at last year’s annual general meeting, always an occasion for something big. These initiatives have altered the DNA of the company. In 2014, more than 95 per cent of the revenue came from older businesses. Currently, revenues are equally divided between the old and the new.

What we see today is an entity where the old and the new are seamlessly positioned. It is a new-look RIL. And, not surprisingly, the markets have given the stock a thumbs up in the last five years.

After the second quarter results for the current fiscal were announced, Ambani spoke of how RIL’s consumer businesses continued to scale new milestones every quarter. Be it the addition of new retail stores or higher net subscribers in the case of Jio (telecom) or the beta trial for the much-awaited 5G services, the story in the new Reliance (2.0 as some would like to call it) continues unabated. “Reliance Industries has effectively used huge cash flows from its legacy petrochemicals business to build the telecom and retail forays over the past decade or so,” explains Gaurav Dua, Head (Capital Market Strategy), Sharekhan by BNP Paribas. According to him, these two new business verticals have not only gained a position of leadership today, but are highly profitable as well. “In the process, they are making a material contribution to the operating profits at a consolidated level.” 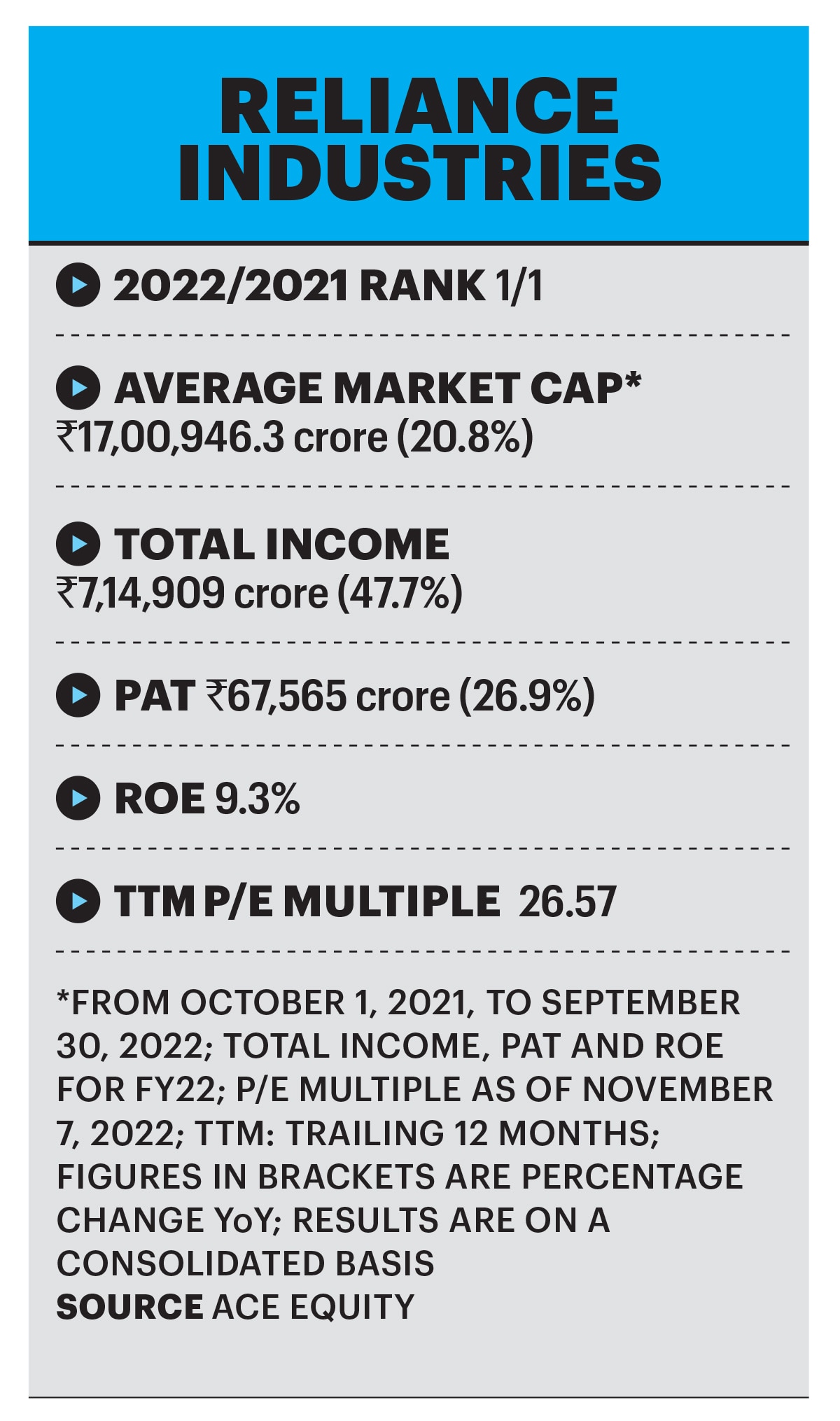 For the second quarter of FY23, the Ebitda (earnings before interest, taxes, depreciation and amortisation) for the two businesses (retail and telecom) together stood at Rs 16,705 crore. That is nearly half of the total Ebitda of Rs 33,336 crore that RIL posted at a consolidated level. In the preceding quarter, the corresponding share for retail and telecom was 45 per cent. A caveat here: the oil-to-chemicals margins in the second quarter were affected by a windfall tax or a special additional excise duty levied on export of fuels and lower polymer deltas. Dua points out that both retail and telecom have attracted investments from marquee investors and contribute to over two-thirds of RIL’s valuation. “This is in sharp contrast to practically nil (or even negative in some cases) value ascribed by analysts to both the businesses five to six years ago.”

The conglomerate first ventured into telecom through Reliance Infocomm in 2002, but that went to Ambani’s younger brother, Anil, three years later when the group’s businesses were demerged. In 2005, RIL ventured into retail with the launch of Reliance Fresh. However, the past decade has seen a renewed thrust in consumer-facing businesses, most notably the re-entry into telecom through Jio (said to be oil spelt backwards), and the story in retail that now has a presence across formats and a position of strength in most of them. Just by way of numbers, Jio has a subscriber base of 419 million (the highest of all operators in India), while the retail business has a network of 16,617 stores across 54.5 million sq. ft.

Be it building Jio or retail and now the [proposed] demerger of financial services from RIL, [their] consumer strategy is clear and definite

In telecom, the approach was to take the 4G route when the incumbents were still on 3G. “The tipping point was when 4G took off in China. It saw the opportunity in a greenfield telecom operation and brought in a new technology (VoLTE or voice over long-term evolution), which then disrupted the market,” says a telecom industry executive. With 5G, he thinks, Reliance will play the IoT (Internet of Things) game apart from using the technology to get into areas such as edtech, medicine, agriculture, gaming, and smart grids. “It will then compete against anyone in the IT/ITeS business offering a suite of products and services.”

Deven Choksey, MD, KR Choksey Securities, picks out consumer focus as the single biggest change at RIL. “Be it building Jio or retail and now the [proposed] demerger of financial services from RIL, the consumer strategy is clear and definite,” he explains, before pointing out that renewable energy, too, will have both B2B and B2C components. Also, from a financial standpoint, getting it right here means a huge upside for the company. “Apart from giving an uptick in revenues, consumer businesses are highly profitable and are more efficient when it comes to return on capital employed.” RIL declined to participate in this story.

Jio was launched in 2016, while the retail business went through its challenges before getting its act together. “To that extent, these are not really new businesses. For instance, Jio has a 36 per cent market share in the telecom business and continues to grow in the mid-teens,” emphasises Aliasgar Shakir, Telecom, Media and Retail Analyst (Institutional Equities), Motilal Oswal Financial Services. On retail, he says the store footprint is across categories (grocery, durables, electronics, jewellery, fashion and lifestyle, and pharma being some of them). There’s a strong presence in digital, too, through e-commerce venture JioMart and fashion and lifestyle digital brand Ajio. “It is fairly well-covered in each of the categories. The benefit of scale works to its advantage, making it a strong player wherever it operates,” says Shakir. Those close to the group say the disruption in retail will be significant. “It already has its own brands with a store network. Now, the focus is on the kirana stores where it will gain access to consumer purchase patterns,” says one person. On a total base of over 10 million such outlets in the country, Reliance has access to around 17,000 through its point-of-sale machines. As the proportion of organised retail takes off (it’s around 10 per cent today), it presents a significant market. “Reliance will now have a play in both forms of retail. With its apparel business, for instance, it is in the organised sector, and the kirana stores open up the unorganised segment,” points out the same person. What will differentiate the strategy for Reliance is its logistics story with warehousing facilities. “It will want to create a supply chain, which can create a serious disruption in the existing model.”

At the most recent annual general meeting, Ambani announced the launch of a fast-moving consumer goods (FMCG) business. “The objective of this business is to develop and deliver high-quality, affordable products which solve every Indian’s daily needs,” he said.

The inevitable question revolves around when the unlocking of value or, more specifically, when the listing of the telecom and retail businesses will take place. Both of them, says Choksey, have not just raised large amounts of money, but have also successfully deployed and delivered good returns. “Ultimately, they will get listed and that is necessary for scale to take place, apart from the investors needing to exit,” he explains. The normal cycle for a private equity fund is seven years and going by that, there is easily another five to six years left, with a good chance that it may even take place earlier as the businesses continue to scale up. Dua adds that “there is eagerness in the market for the listing of these businesses, which would be an opportunity to invest directly in these fast-growing sectors”.

It [RIL] is fairly well-covered in each of the categories. The benefit of scale works to its advantage, making it a strong player wherever it operates

At the 2021 annual general meeting, Ambani had announced that RIL would invest $10 billion in renewable energy. The plan is to have four giga factories at Jamnagar to produce solar cells and modules, energy storage batteries, fuel cells and green hydrogen. This is a long-gestation foray and RIL’s balance sheet can easily fund this. The strategic advantage that RIL has is its integrated energy portfolio. “Its key business has been energy for many years. Plus, it is playing to its strengths when it comes to chemicals and manufacturing,” says one person familiar with the group’s renewable energy business, while pointing out that the decision to take the manufacturing route is one that is well thought out. “It also has a significant captive requirement and that is round the clock. Plus, hydrogen is a familiar area for RIL.” Combine that with an understanding of the ecosystem and the ability to execute, and an interesting picture emerges.

Choksey says the cash flow is to the extent of Rs 1.3-1.4 lakh crore, which can easily support any venture without raising money from outside. “A business will need to get to a certain stage of development when it becomes a lot easier to get in the cash. Today, RIL’s funding is on autopilot and the projects are well-placed. It just needs to focus on its core strength of execution,” says Choksey. Dua believes renewable energy is a clear growth opportunity and RIL has already chalked out aggressive investments. “Like retail and telecom, it has the potential to create meaningful wealth for shareholders,” says Dua.

In the midst of all this are the traditional businesses, where the sectors are going through a period of disruption. According to Choksey, alternative sources of fuel are inevitable, but that is a long-term story. “The shift could take another three decades if not more. Till then, the source of energy will come from RIL’s traditional businesses (oil),” he explains. In the case of petrochemicals, the green story globally is very much in play, but again one that is a while away. “The older businesses of RIL, too, will transform after having reached maturity in a different world. That means, they too must be looked at differently.” By any stretch, this has the makings of the most interesting and dramatic phase for RIL.