With start-up valuations hitting realistic levels and with no fear of missing out, venture capitalists are sitting on massive dry powder and are in no rush to invest
By: Binu Paul

It is very rare for India to be in this position,” says Karthik Reddy, Managing Partner of Blume Ventures and Chairperson of industry body IVCA, indicating that the country has never had the luxury of as much venture capital (VC) surplus money as it has today. Over the past three years, VCs in India have raised about $13 billion, data from Venture Intelligence shows. And this only reflects the amount secured by India-dedicated funds. Per global alternative assets data specialist Preqin, VCs globally are sitting on a record $534 billion of dry powder (capital available with VCs but not deployed yet). Also, start-ups attract capital from a number of sources that aren’t captured in these estimates.

Now, capital raised is not the same as capital invested. The pile of cash is mounting, but VCs are not pumping in the money into start-ups at any great pace. Start-up funding in India dropped 35 per cent to $24.7 billion in January-November 2022, from $37.2 billion in the corresponding period last year, says a report by data platform Tracxn. New-age firms across stages and sectors are cutting costs to extend their runways. Start-ups such as BYJU’S, Zomato, Ola and others have sacked nearly 14,000 people so far in 2022. The question then is, does the abundance of cash give start-ups a reason to be optimistic?

If LPs sense that you [GPs] can’t be disciplined, it will affect their confidence. And when you go for the next fund, they may or may not participate

Given the absurd volumes of VC funding in 2021, limited partners (LPs) would want general partners (GPs, or fund managers) to be more thoughtful about capital deployment, and not run through the allocations in a hurry. Which, in plain terms, is not very good news for start-ups which hope that VCs will at some point be driven to loosen their purse strings due to deployment pressure from their investors.

LPs would certainly want to avoid a 2021-like frenzy, where some VCs with five-year funds built portfolios at such a pace that they ran out of capital in two years. That also meant the necessary due-diligence had taken a back seat. Also, swift deployment and a large portfolio makes it incredibly tough for VCs to find meaningful exits in a fund’s life cycle. Consequently, GPs are now taking it slow and putting off drawdowns (a GP’s right to ask for  the committed capital from investors) from LPs to later days. 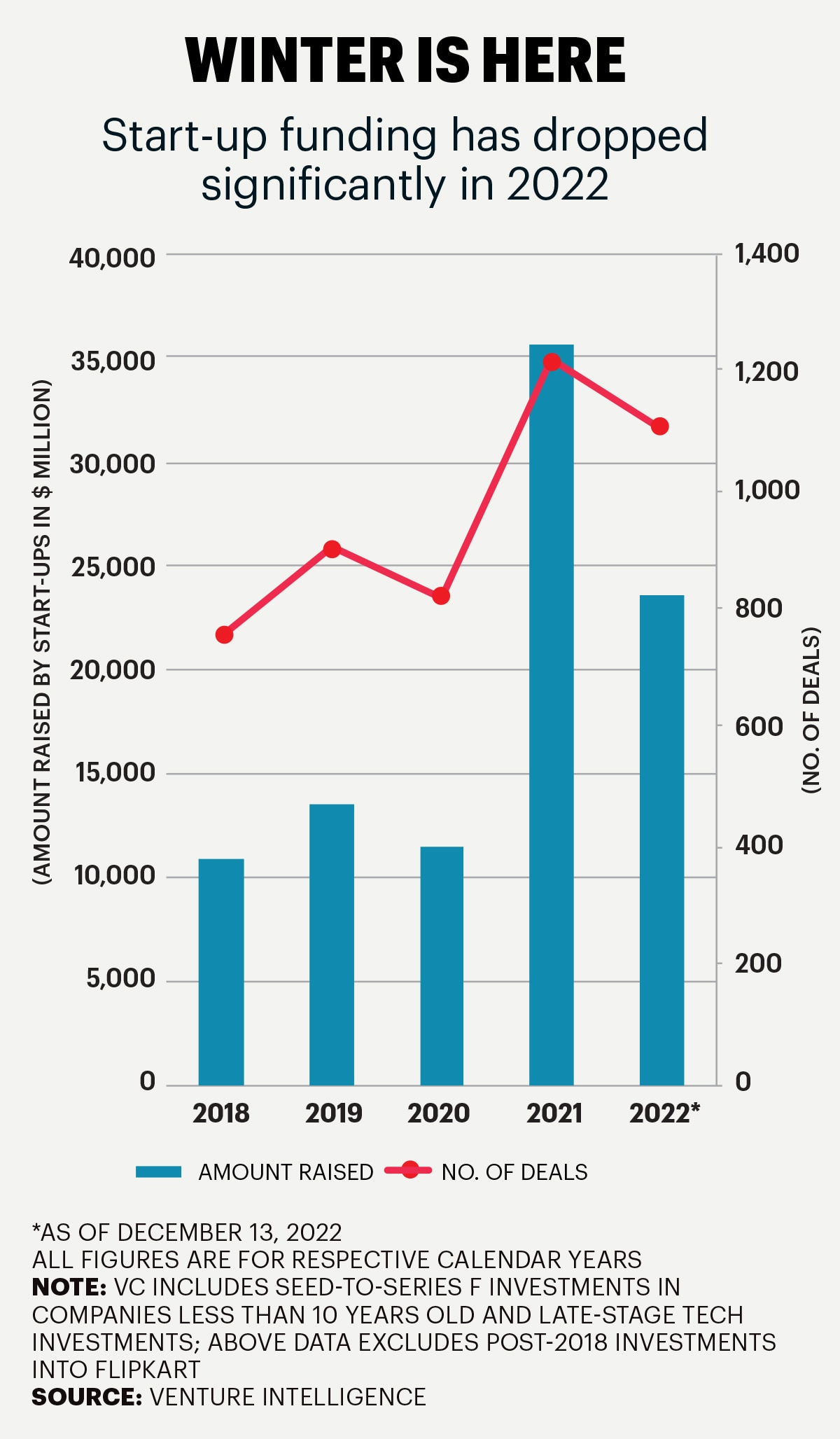 The 2021-vintage funds that had deployed capital are now worried, as a quantum of the money had gone into start-ups at very high valuations. Now, they have to wait for a few years before some of the firms grow into their valuations. And that is reflecting in the potential internal rates of return (IRRs), a metric used by VCs to measure a fund’s performance over the years.

Sasha Mirchandani, Founder and Managing Partner of Kae Capital, which recently closed its third fund with a corpus of $100 million, says the fundraising cycles have shrunk so much that GPs are going back to LPs for fresh allocation in quick succession; in some cases, under a year. It is totally unhealthy as investors aren’t able to assess a fund’s investments before recommitting, he adds. “Getting into companies at the right valuation and right vintage is most important for the fund’s success. Even for our new fund, I would tell the investors to hold the money because we have enough in the bank. If we are not writing a cheque, our IRRs go down,” he says. Even Blume’s Reddy says that they don’t drawdown the committed capital fully.

GPs are going to LPs for fresh allocation... in under a year. It is totally unhealthy as investors aren’t able to assess a fund’s investments before recommitting

LPs are also affected by global macros. With a majority of funding coming from global investors, the build-up of dry powder isn’t a secular trend. Global LPs shift allocation based on where they are getting better value and momentum. “This time, they [LPs] will observe the GPs’ behaviour as a directional trend. If they sense that LPs can’t be disciplined in this phase, it will affect their confidence. And when they go back for the next fund, they may or may not participate,” says Reddy of Blume Ventures. Between 2010 and 2022, Blume has raised four funds with total assets under management of over $600 million.

As global LPs may shift their attention to other markets and asset classes, VCs will work towards ensuring enough dry powder to last well into 2024, so that their funding cycles don’t get impacted. This can make VCs even more cautious. “Dry powder needs to get added on a regular basis. What happens in such a situation is, your exits come down and GPs are unable to return the money to LPs. So, new fundraises get affected, and newer allocations become lesser,” says Samir Sheth, Partner & Head of Deal Advisory Services at consultancy, BDO India. Like in every cloud, there is a silver lining here, too: investors remain optimistic about India’s ability to accommodate a lot more capital. Plus, most global investors are bullish on India’s long-term prospects. Blume’s Reddy explains that the massive build-up of dry powder is a result of this confidence. “LPs are not playing for 2023-24 outcomes; they are playing for 2029, 2030 or 2032. You can’t link a long-term belief of 10-12 years to what will happen in the next 12 months,” he says.

The economic fundamentals of India seem to be holding steady compared to many other economies. Indian public markets aren’t that affected, and tech companies, too, seem to be doing well. Also, there could be an inflow of first-time foreign LPs to the Indian private market, driven by China’s crackdown on tech. Though the US will continue to host a bulk of the allocation for global LPs, India as a destination for investments looks a lot brighter for their emerging market and Asia allocations.

I feel in the next fundraise cycle [for VCs]—probably in the second half of the next year—we might see a lot of new, first-time LPs coming into India

“I feel when the next fundraise cycle [for VCs] comes up, which will probably be in the second half of next year, we might see a lot of new, first-time LPs coming into India. We’ve seen that indication from some global LPs—who had missed India so far or who have consciously not done India—holding very positive views towards India,” says Rohan Paranjpey, MD, Head-Alternative Investments, Waterfield Advisors. Waterfield manages a `540-crore Fund of Funds that invests in VCs as an LP and also co-invests with them.

Paranjpey adds that a lot more family offices are readying to jump into the start-up investing game as they’re seeing lower valuations, moderate pace of deal closing, and more opportunities to invest or co-invest with experienced GPs. 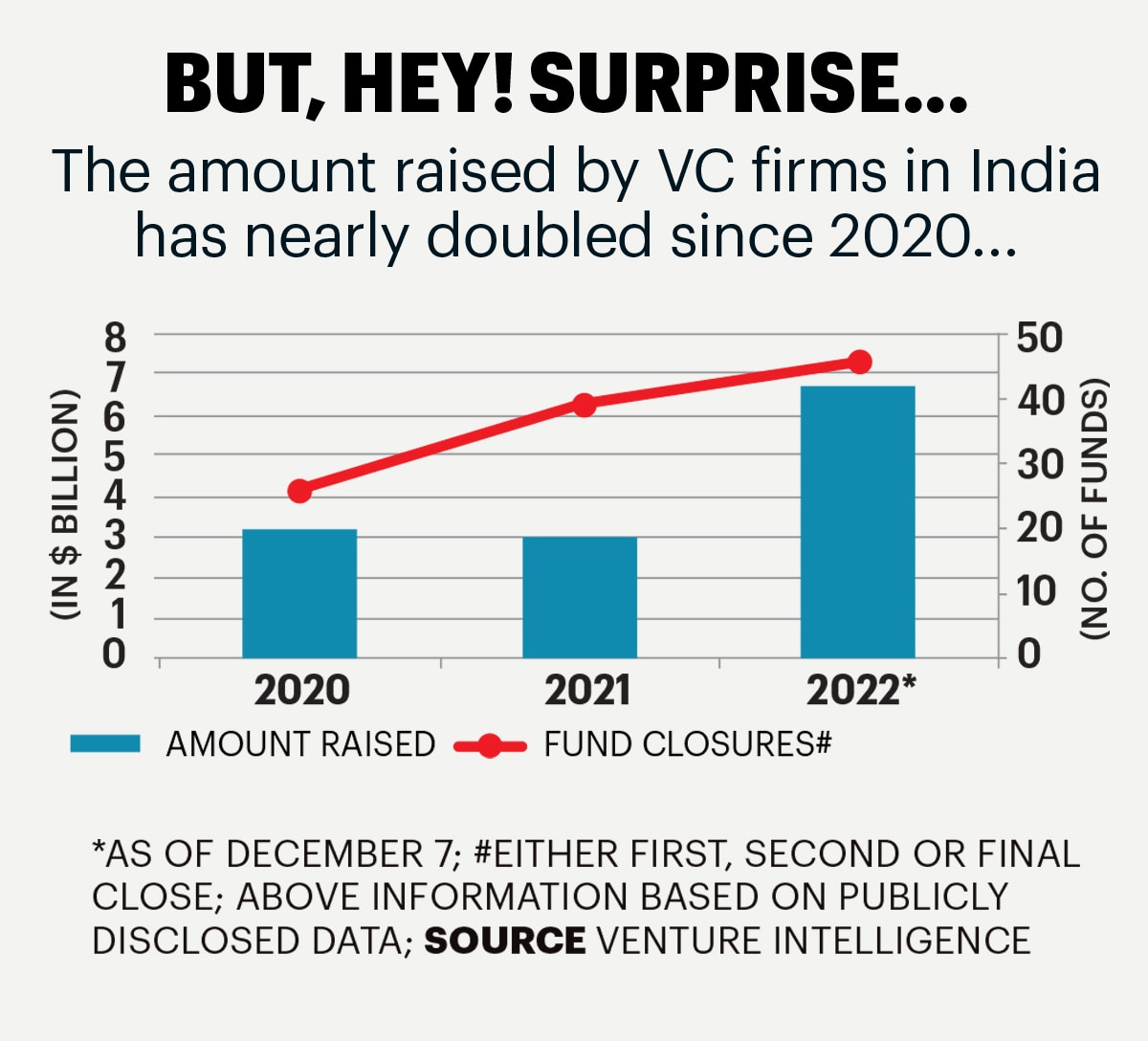 At the same time, the risk-to-reward ratio is better in US private assets today. So, US-based VC money is likely to stay there for some time. It means GPs in India will have to dig deeper into their own pockets to play stronger. In a downturn, the dry powder will find its way to portfolio firms first before exploring newer opportunities. “Our first companies out of Fund IV, which are less than a year old, are now beginning to get up-rounds, about four or five of them. I believe in these companies and the founders. I would put more reserves of mine into those companies. You start seeing this behaviour from Sequoia downwards; everyone is going to double down on their portfolios whenever they can,” says Reddy.

Some new investment patterns are also beginning to appear. VCs are leveraging their capital to write larger cheques for fewer firms. Also, secondary transactions (where a VC firm buys a start-up stake from another investor) are picking up as early investors open up to exits, even at discounts, to give returns to their LPs, while larger investors are taking this opportunity to maximise ownership in their portfolio.

It’s a time of cautious optimism; effectively, capital deployment in a period of slowdown has usually been cautious despite dry powder build-up

At more advanced stages of funding, expectation gaps on the start-ups’ valuations still prevail. Consequently, the deals have slowed down in the later stages—such as series C, D, E and beyond—where sharp corrections are required. Unless start-up boards reconcile to market realities and accept deals that may involve down/flat rounds or M&As, investors are likely to sit out. The buyer-seller expectations are gradually being corrected in series A and B stages, and transactions are beginning to pick up there. At seed stages, deal activity is about 80-90 per cent of last year; however, investors have more time for due diligence now. 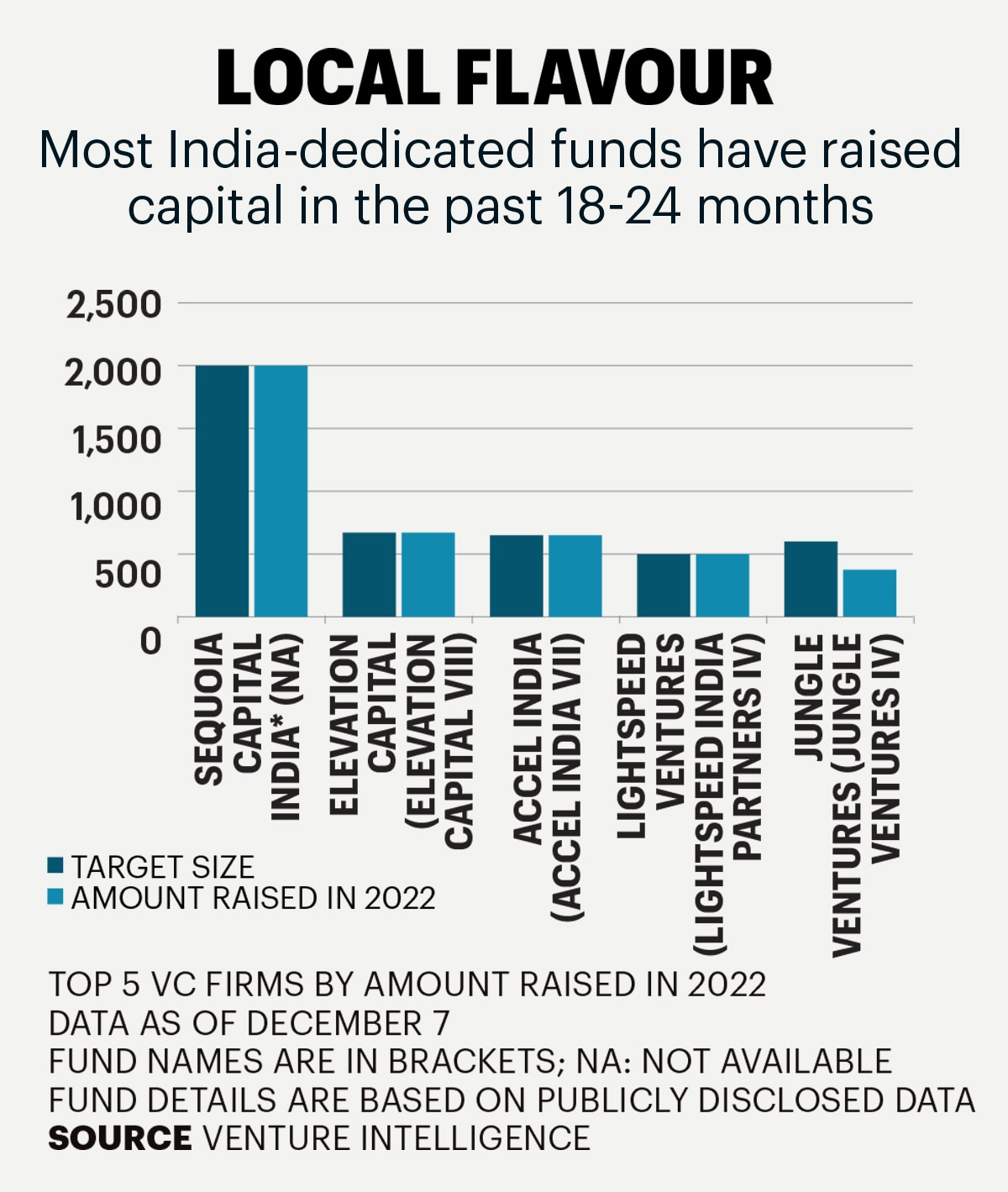 Experts say that most corrections will happen over the next 12 months. Firms that raised massive amounts of capital over the past 18-24 months would wait for another 12 months before hitting the market again. They will begin raising rounds at flat valuations or small premiums. The other set of firms are those running out of cash. They are expected to be a lot more active in the first half of the year. Some of these firms would readily accept down rounds to survive, while some will look for potential M&A suitors, and some may even fold up. 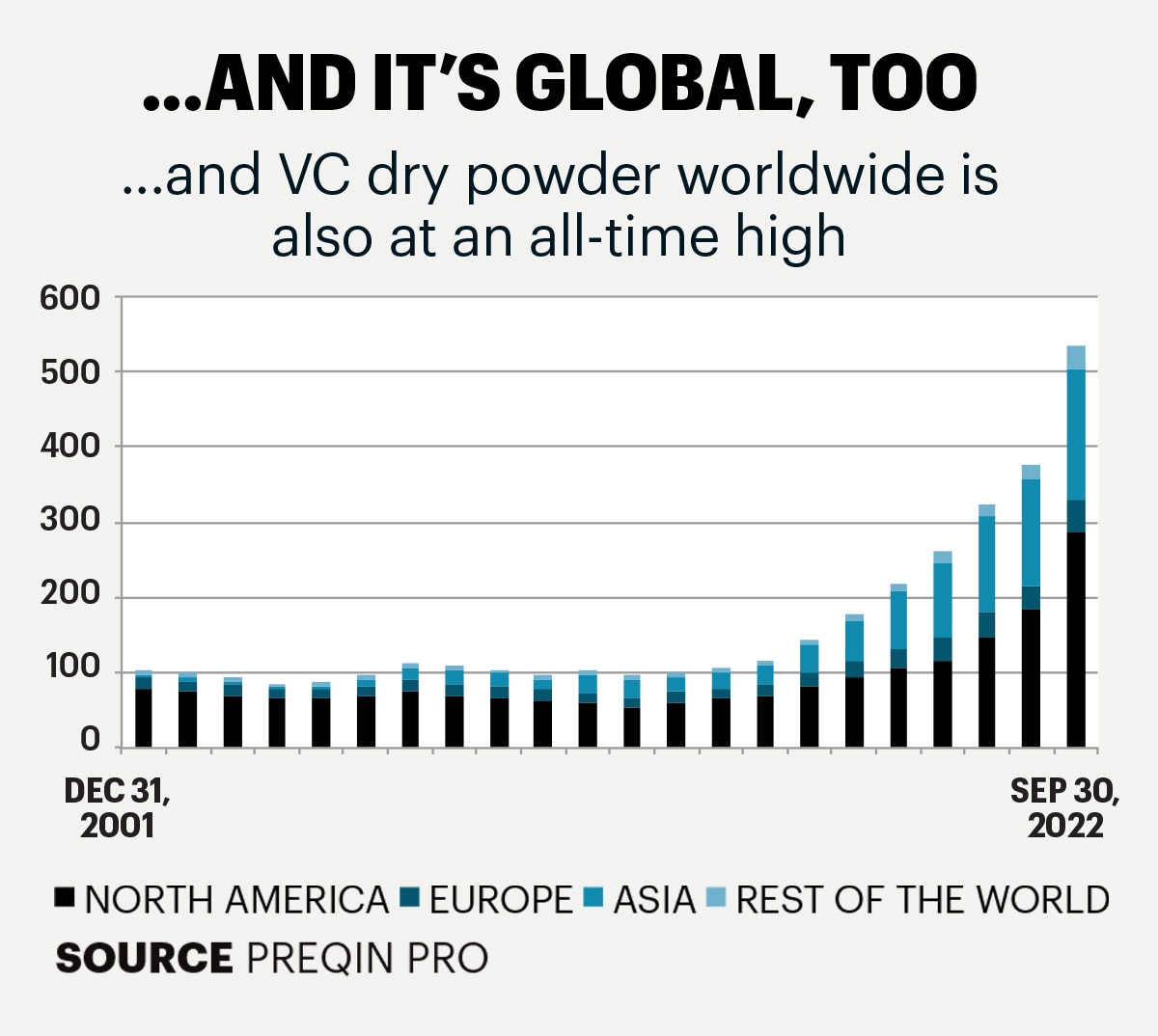 Sai Deo, Partner at Bain & Company, expects VCs to earmark a portion of their dry powder to ensure sufficient runway or M&A support for well-performing portfolio firms while some of that capital will be utilised for opportunistic deals across stages.

However, citing the funding downturns in 2001 and 2008—when large funds were raised, but not deployed fully due to reasons such as depth of quality assets, time taken for valuations to correct and LPs maintaining caution as realisations from prior deployments slowed down due to unattractive exits—Deo says it will be a time of cautious optimism for VCs as well as start-ups. “Effectively, capital deployment in a period of slowdown has usually been cautious despite dry powder build-up,” she says.