Once the VFX back office for Hollywood, India is fast emerging as a global contender in the visual effects arena

Sigmund Freud, the father of western psychoanalysis, once famously noted: “Dreams are constructed from the residue of yesterday.” More than 122 years later, dreams are being constructed for the world to immerse itself in by countless VFX (visual effects) studios dotting Indian cities such as Mumbai, Bengaluru, Hyderabad and Chennai. Sounds incredible? Since the late 2000s, an increasing number of movies nominated for their edge-of-your-seat VFX have had some connection with India. Think Interstellar, Gravity, Shrek, Tron, Deadpool, X-Men: Apocalypse, Spiderman, The Avengers, The Curious Case of Benjamin Button, Guardians of the Galaxy, The Martian, Cinderella… it’s a pretty long list. But even that is the proverbial tip of the iceberg. If you also included popular shows streamed on OTT platforms such as Amazon Prime Video and Netflix, the list would go on.

And who knows it better than Merzin Tavaria, President of Global Production & Operations at DNEG. Twenty-five years ago, he and his friend Namit Malhotra, along with two other friends, set up an editing studio in a garage in the western suburbs of Khar in Mumbai. The small business has since evolved into Prime Focus Ltd, the world’s largest integrated media services powerhouse that has pioneered India’s VFX revolution. At a time when most could only marvel at the dinosaurs of Jurassic Park or the melting robot in Terminator II or bullet-time in The Matrix trilogy, the friends dreamed of taking Indians’ famed creativity and software skills to the world. “It’s been one exciting roller-coaster ride with its share of ups and downs, twists and turns. It’s taught us to keep pushing ahead and build on our resilience to seek out new challenges,” says Tavaria over a video call from London. “Anytime there is something impossible, we make it happen! We also keep reinventing every few years to keep ourselves going.” The work has earned them accolades from all over, including seven Academy Awards for their London-based subsidiary DNEG to date.

So, why is VFX so hot these days? It eliminates dangers such as risky stunts, explosions, crashes and so on, and in the process “not only creates a superior experience for the viewers, but also gives opportunities to filmmakers and artists to expand their visual creativity and make a shot or a sequence or a film look grand and believable”, explains Keitan Yadav, COO of Red Chillies Entertainment, promoted by superstar Shah Rukh Khan. “Even animal CGI gives more freedom to mimic natural behaviour, all the while avoiding the usage of a real animal.” Yadav cites cost-effectiveness, flexibility, safety and control as key factors behind increased use of VFX in Indian movies.

Not only does [VFX] create a superior experience for the viewers, it also gives opportunities to film-makers and artists to expand their visual creativity. 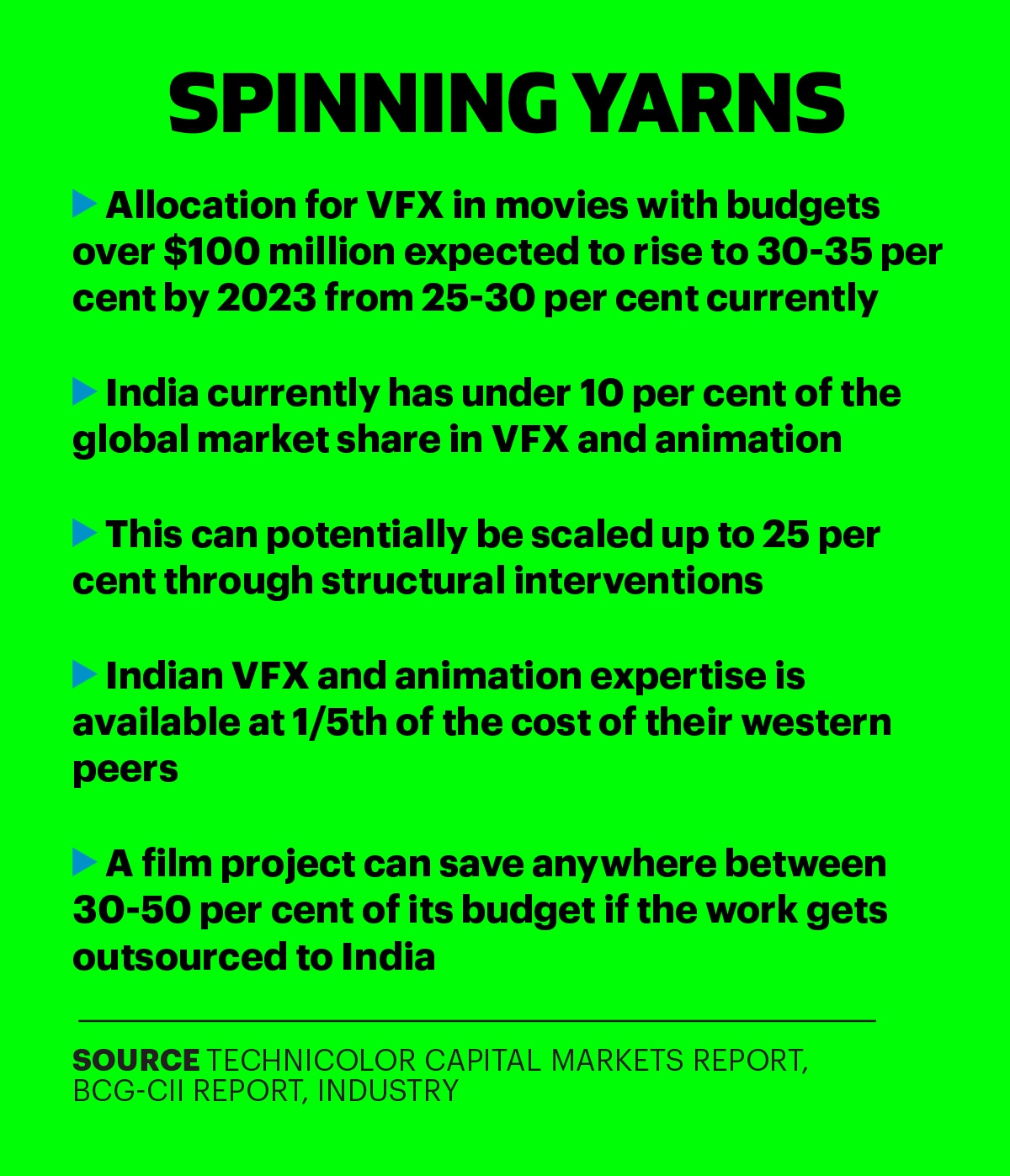 And what makes India the wannabe dream factory of the world? The answer boils down to four Cs: cost, communication, creativity and computing. “Indians are very strong on creativity. They understand a creative brief and are good at blending it with technology,” points out Rajan E., Head of Human Resources & Operations at Phantom VFX. “VFX is 50 per cent creative thinking and building concepts, with the other 50 per cent technology. For example, today we are talking about virtual production using software like Unreal and Unity, where we are creating whole scenes and shots for a movie.” Phantom VFX’s Executive Producer Natalie Millar Jadhav makes a nuanced observation: “Studios in India have been providing a lot of outsourced VFX to international studios, which are largely more technical than creative tasks. Studios like Phantom are pushing the envelope by working with international partners and projects to do work that requires a higher level of skills.”

Jadhav has a point. Earlier, a substantial part of VFX-related work being done here was labour-intensive like Roto and Paint. But the share of other aspects of the creative process such as computer-generated imagery (CGI) has also risen gradually. At the same time, the introduction of new technologies like virtual production and real-time compositing has caused a disruption. These technologies do away with the famed green screen by providing ready-made backgrounds for cinematic sequences. Over time, as more Indian studios adopt these solutions, they will handle more complex assignments for overseas clients. “The ability to knit the screens with the camera using software like Unreal Engine, mimicking real life and virtual locations live, with live changes and alterations, reduces the time between thought and execution. Although used in minimal amounts currently due to the evolving technology, it is surely going to grow and enable film-makers more than ever,” predicts Yadav.

With the share of VFX in big-budget movies—with a $100-million production budget—set to rise to 30-35 per cent from 25-30 per cent currently, a big opportunity is there for the taking for the Indian VFX and animation industry. Following a challenging time during the pandemic, the Indian VFX industry has recovered 35-50 per cent of its business.

The other boost to the sector will come from the domestic film industry, where south Indian blockbusters like the Baahubali saga, KGF and Pushpa have transcended linguistic barriers and proved that Indian audiences wish to see more of high-end VFX. As DNEG’s Tavaria points out, VFX has been around for years, but the scale is getting bigger and better now: “As a service provider, even we are better placed now with the experience that is available at our fingertips, with the same level of technology available to film-makers, which was missing earlier.”

As a service provider, even we are better placed now with the experience that is available at our fingertips

There are other factors at play, too. “Leading actors are keen to sign up for larger-than-life films. This is especially evident in southern cinema, where such grandeur is achieved using VFX,” says Sunny Bakshi, CEO of Silver Cloud Studios. “Also, due to the rising expectations of both actors and the audience from a movie’s production value and the potential of high box office collections due to Indian films getting released worldwide, the role of VFX is getting bigger.”

While that sounds cool, challenges are not too far away

Currently, the Indian post-production, VFX and animation industry accounts for less than 10 per cent share of the $7.51-billion global market and has the potential to boom if several recent central and state government initiatives are successful. “Throughout our growth journey, we have been fighting with one hand tied because we didn’t have access to enough technology, enough funds, enough government backing. That’s always a challenge because we are an emerging segment and it’s a very important part of the global business today,” says DNEG’s Tavaria.

In recent times, both central and state governments have been giving a push to the animation, visual effects, gaming and comics (AVGC) industry, which was recognised as a Champion Sector in 2018. Acknowledging the revenue generation and job creation potential of the sector, the central government has constituted an AVGC promotion task force to drive policy, expand exports and attract FDI. There is also talk of extending incentives under the flagship Service Exports from India Scheme (SEIS) to the industry. States such as Maharashtra, Karnataka, Telangana and Assam have created special policies to promote the sector.

Then, not unlike several other growing industries, the segment is facing a talent deficit. “We are always running short of artists. If tomorrow you get me 20 good artists, we will hire them on the spot!” says Bakshi. “Here the fight is not for work from film studios—there is ample amount of that—but about retaining artists.” Therefore, in addition to creating physical infrastructure such as studios and technical facilities, what is also needed is setting up specialised seats of learning, and undergraduate and postgraduate courses in partnership with foreign studios and universities.

Others feel that the high rate of attrition can only be balanced through the creation of a strong set of standards to govern the industry. “There has to be government bodies, forums and industry standards to take care of how a project comes in, how it gets allocated, how it gets done, and what should be the financial and time factors attached to it,” says Suchit Mukherjee, Founding Partner & CEO, Famulus Media & Entertainment. “All of that will help in closing the existing gaps.”

Meanwhile, companies like Phantom VFX are taking several initiatives like visiting university campuses and grooming talent by taking on board people with good skills in art or technology for three-month-long paid training programmes. “We are in touch with the Media and Entertainment Sector Council (MESC) to reach out to all the universities to get to the right talent pool across states. We also try to encourage people at various events to join the industry,” says Rajan of Phantom VFX.

Since VFX is a pure technology play, it is bound to keep evolving at a rapid clip. In such a scenario, merely retaining a competitive advantage where a VFX or animation expert is available at one-fifth the price of her western peers may not suffice. “We still need to cover considerable distance in terms of timing and costing. Yes, sometimes the creative thoughts and inputs are dictated from the outside. The reason being a large chunk of our work is like factory work. We can put more creative inputs and energies into it if time and cost are balanced to create more intellectual creative leaders who can lead from the inception stage to final delivery,” says Mukherjee.

India has some distance to go to seriously compete with other global hubs such as Montreal and London, which offer skilled workers together with other lucrative incentives to studios. This has resulted in the VFX segment in Montreal growing at a CAGR of 25 per cent, while London is already regarded as Europe’s VFX capital.

In addition to ensuring an effective roll-out of the government’s AVGC policy, training and upskilling also require a tremendous push to ensure that Indian VFX studios continue to enthral and awe a global audience with alien invasions and flying dragons.