Thanks to a dramatic rise in subscription gaming services and cloud gaming amid the pandemic, India is now the world's fastest-growing mobile gaming market, helping many enthusiasts turn into professionals. Will the momentum sustain?

Professional Clash Royale player Prashant Pandey started gaming in 2015 while he was studying to become an engineer in Bengaluru. Five minutes of casual gaming turned into 15 hours a day and, in 2018, Pandey went on to represent India at the Clash Royale League e-sports competition in the US. He even started earning a six-figure salary as a player. This year, Pandey co-founded Qlan, a social network for India's online gaming community, where players can look for jobs, broadcast their skills, share content, etc. "India's online gaming industry is not what it used to be. It has gone beyond leisure and entertainment. It's a full-fledged career opportunity in the making now. Just like Indian cricketers get salary from the BCCI [Board of Control for Cricket in India], online gamers can make upto Rs 1.5 lakh [monthly] by playing for a team," says Mumbai-based Pandey.

In the early 2000s, games such as Counter-Strike and Age of Empires introduced Indians to the world of online gaming though consoles and PCs. Today, almost two decades later, India is the world's fastest-growing mobile gaming market, growing at 22 per cent annually, and is expected to generate an annual revenue of Rs 11,900 crore by FY23, according to a 2019 KPMG report. The main reason behind this is India's 560-million-strong internet user base, growth of cloud gaming and a dramatic rise in subscription platforms accelerated by the pandemic.  Mobile users form an overwhelming 85 per cent of the industry and given the low entry barrier for mobile games such as PUBG Mobile, Free Fire, Clash of Legends and Call of Duty Mobile, the industry is expected to grow exponentially in the next few years. A joint study last year by Statista, Nazara and INC24 estimated that the Indian gaming market is poised to reach $3.5 billion in value by 2023 and $10.2 billion by 2025 from around $1.2 billion in 2020. Not just that, according to e-sports content platform AFK Gaming, the total e-sports prize money grew from Rs 77 lakh in 2016 to Rs 3.84 crore in 2018, growing at a CAGR of 123.3 per cent during the period 2016-18. This has, in turn, helped more gaming enthusiasts turn into professional players. Today, as per industry experts, there are 80,000-odd people looking at online gaming as a potential career. "It's seeing very healthy growth. A lot more gamers are picking up video games professionally and creating good content around it. At the end of the day, a gamer is not just here to play for fun, but also get recognised for his gameplay, and that's what we want to provide," says Naman Jhawar, Senior Vice President, Strategy and Operations at Mobile Premier League (MPL), one of the largest online gaming companies globally.

According to a February 2021 report by the IAMAI and Ikigai Law, the digital games and sports industry has opened numerous job opportunities in India, with annual salary packages ranging from Rs 3 lakh to over Rs 40 lakh. Online gamers have broadly three ways to earn revenue: the prize money, sponsorship deals and streaming live online. If they are part of a team, they could also earn a monthly salary.

At the end of the day, a gamer is not just here to play for fun, but also get recognised for his gameplay

Besides opportunities for gamers, the industry has also created jobs in the fields of marketing, sales, data analysis, game design, technology, as well as ancillary jobs for live streamers, coaches, mentors, sport therapists, etc. This growth, according to the All India Gaming Federation (AIGF), is largely driven by the young and tech-savvy population, as well as factors such as broad internet coverage and affordable smartphones with better performance. "This entire growth in online gaming is consistent with the growth in the Digital India initiative. People have started to pay for content. The primary challenge for the industry is the different interpretation of gaming in the minds of some people. Today, it's creating jobs and contributing to taxes. The industry is easier to self-regulate," says Roland Landers, CEO, AIGF.

Online gaming is also seeing huge interest and investment from giants such as Facebook, Netflix and Paytm. Last year, Paytm First Games invested Rs 10 crore in homegrown gaming studios, game developers and designers to help them create Indianised and culturally relevant online games. While Facebook and Netflix haven't revealed their investments yet, in July-August this year, Facebook recorded 234 million gameplay sessions in India, making it the third-ranked country with the most gameplay sessions. "Gaming is closely tied to Facebook's mission of giving people the power to build a community and bring the world closer together," says Manohar Hotchandani, Business Development Director, Facebook India. 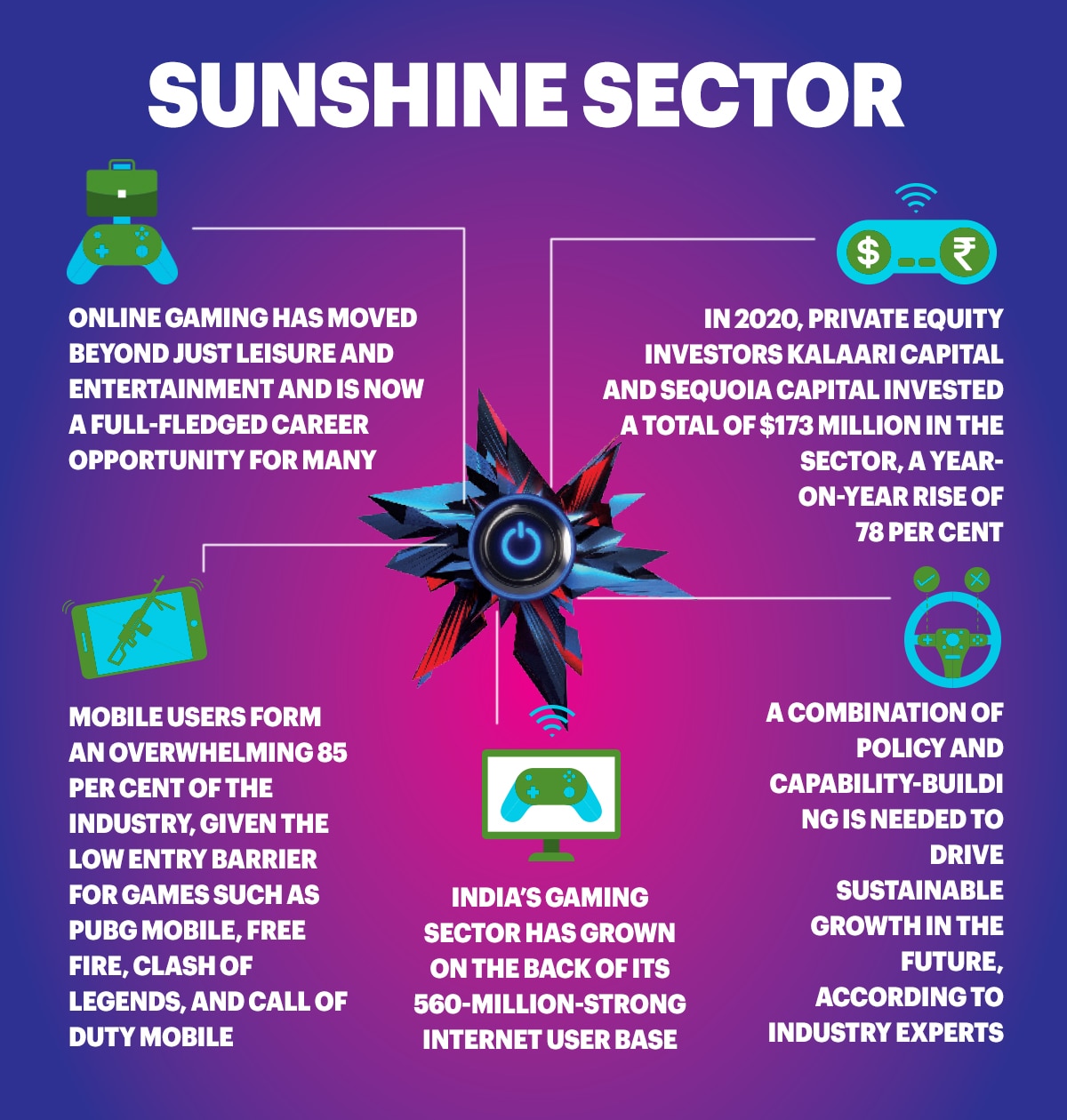 "In fact, over the past year, viewership of live gaming videos in India has grown by over 530 per cent, so the opportunity for game developers and creators is huge. We have three consumer verticals, namely Play, Watch and Connect. For developers and publishers, our goal is to build a platform that enables developers to reach new audiences, connect with players and monetise their games," says Hotchandani, adding, "For creators, our goal is to enable gaming creators to build and grow their communities on Facebook and earn a living through monetisation on our platform. We are working with top creators, as well as nano and micro creators to expand their presence on Facebook."

The company has also helped many homegrown creators prosper. A case in point is Rog Stream, India's biggest Facebook Gaming homegrown female creator with more than two million followers. Facebook promoted her work and has given creators like her an enhanced platform. Going ahead, the company's investment in India is only going to grow, with plans to dish out over $1 billion to creators across platforms by the end of next year. It has also signed exclusive deals with gamers to stream on their platforms. "We are focussed on creating value for people who love gaming content and the businesses that drive the industry," adds Hotchandani.

Facebook is also working to make vernacular mainstream. "India is home to many languages and our team is working with creators who provide live streams in Hindi, Tamil, Telugu, Marathi and Punjabi apart from English such as Bagha, one of India's most popular Bengali gaming live streamers, and PunjabiGamer63, a father-son duo who stream games together in Punjabi," says Hotchandani.

Private equity investors Kalaari Capital and Sequoia Capital also invested a total of $173 million in 2020, a year-on-year rise of 78 per cent, according to Tracxn Technologies. The top-funded start-ups include Dream11 (with $100 million in total funding), followed by Smaaash Entertainment ($82.6 million) and Nazara Technologies ($79 million). The sector attracted $544 million in investments during the August 2020-January 2021 period, as per a March 2021 Maple Capital Advisors report. This is set to double over the next 12-18 months.

Mobile gaming is one of the highest growth markets in the media and entertainment space, according to Nazara Technologies, which is backed by ace investor Rakesh Jhunjhunwala. "In gaming, boundaries are not defined by countries. It's about how you build global communities and content around them. 5G and rise in cloud gaming will act as enablers for the industry. Once that happens, it will be able to support a much better multi-player setup," says Manish Agarwal, CEO, Nazara Technologies. "As the domestic gaming market increases, its scale increases, the investment increases, gaming will become a large source of employment. We want to create local heroes and local athletes through online gaming. The perception about the industry needs to change," he says.

In gaming, boundaries are not defined by countries. It’s about how you build global communities and content around them

With over 400-odd companies—including major players such as Nazara Technologies, Smaaash, Dream11, Games 24X7, The Walt Disney Company India, Moonfrog Labs, Zapak and 99Games—operating in the country right now, consolidation seems to be the name of the game. "It's definitely becoming a mainstream form of entertainment and, going forward, will see some kind of consolidation when they find it sustainable from a margins perspective. I am sure the industry will create even more jobs and entrepreneurs," says Mukesh Kumar, Engagement Manager, RedSeer Consulting.

As per the AIGF, too, consolidation is inevitable in the next few years. "Consolidation will happen in each of the gaming formats. Realistically, there could be 10-12 decently-sized companies that [will] sustain. It's the same for all other entertainment industries such as OTT or sports broadcasting. So, smaller players who are down the pecking order may want to consolidate in, say, the next four-five years," says Landers of AIGF.

"There are more and more monetisation models that are coming up. Advertising doesn't work in India as one needs a very high user base to monetise it. Similarly, subscription is  great for some titles that are based on seasons, such as fantasy sports. MPL revolutionised a third kind of monetisation model, which was pay-to-earn and that has scaled up very well. A lot more games will be created on a certain degree of trading characteristics and will help users not only play for fun and engagement, but also trade digital assets inside the game," says Jhawar, who expects this model to pick up in a big way in the next two-three years.

On the regulatory front, however, things aren't very clear yet. Online fantasy gaming, also often referred to as 'real money skill gaming', is governed by the Public Gambling Act (PGA) of India, 1867, and states such as Andhra Pradesh, Assam, Nagaland, Odisha, Sikkim, Tamil Nadu and Telangana have banned some online fantasy games. Industry bodies on their part have raised the argument that online fantasy games and sports require talent and skill. Positive judgments in the Supreme Court, too, indicate that games of skill are legal and protected under the Constitution. The European Union and countries such as
the UK and the US have regulations in place, and India is well on its way to getting one.

"We have been saying that just because a gamer is paying to play a game on a platform, it does not make it gambling, right? Because today, I am paying to view content on Netflix or Amazon Prime, and I am also paying for music," says Landers. A combination of policy and capability building is needed to drive sustainable growth, as per industry experts. The regulatory uncertainty around defining games of skill and gambling, as well as data protection and taxing gaming companies also needs to be resolved. "Despite unambiguous Supreme Court jurisprudence that has repeatedly held that games of skill such as rummy and fantasy sports are legitimate business activities protected under Article 19(1)(g) of the Constitution of India, many state governments have chosen to introduce bans that do not distinguish between games of skill and games of chance," says Dinker Vashisht, Vice President, Corporate Affairs, Games24x7. "Not surprisingly, these bans have been set aside by the respective High Courts, most recently in the verdicts of Madras and Kerala High Courts. A blanket ban is not a solution and, given the opportunity, the online skill gaming sector is keen to work with the government towards developing a progressive policy and regulatory structure for this sunrise sector," adds Vashisht.

Once the regulations are in place, the industry will be on a growth path like never before, believe experts. "The decade 2020 onwards will be about Web 3.0 and connected business models. The next 10 years will see the evolution of technologies such as cloud and Blockchain-based data infrastructure, which will disrupt the industry like never before," says Jhawar.