Chidambaram's poll Budget seeks to please all, with prudence

The finance minister could not change the tax regime vastly, as it required legislative approvals and is generally left for the next government in an election year. WATCH: Chidambaram presents Interim Budget for 2014-15. The direct tax rates were left unaltered. But that did not stop him from indulging in some self-acclamation for meeting key targets while highlighting achievements of his government. 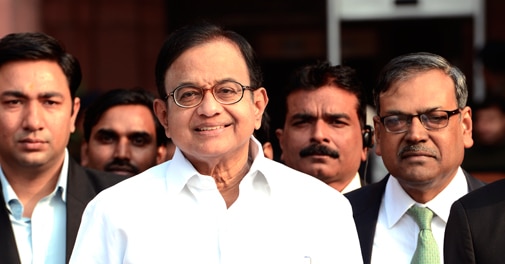 Seizing the limited elbow room in an election year, Finance Minister P. Chidambaram presented the interim budget for the next fiscal Monday saying the Indian economy was more stable today than two years ago and sought to win over key sections like scheduled castes, minorities, women, farmers and army personnel with more money for their welfare while pleasing the middle class with excise cuts to make cars, mobile phones and items of daily consumption cheaper.

The finance minister could not change the tax regime vastly, as it required legislative approvals and is generally left for the next government in an election year. The direct tax rates were left unaltered. But that did not stop him from indulging in some self-acclamation for meeting key targets while highlighting achievements of his government.

In his largely uninterrupted 56-minute speech, which many feared would get disrupted by the volatile Telangana issue that has not let the last session of the 15th Lok Sabha function properly, he sought to drive home the point that the government did not spend recklesly and more than met the targets for fiscal deficit set for 2013-14.

At the same time, farm credit disbursals and public investments, notably on infrastructure, were met despite challenges, he said, and added concerns over food inflation and current account deficit were also adequately addressed.

"No one is speaking about downgrades now," said Chidambaram, referring to the threats given by some global credit rating agencies to lower India's economic outlook that could have rendered junk status to Indian bonds and triggered a flight of capital.

"The economy is more stable today than it was two years ago," said the minister, tabling India's 83rd national budget and the 9th such personal exercise for him. India's growth, he said, will be 4.9 percent this fiscal, against 4.5 percent in 2012-13.

"I wonder how many have noted the fact that India's economy, in terms of the size of its GDP (gross domestic product), is the 11th largest in the world. There are great things in store."

The main Budget for the financial year 2014-15 will be presented by the new government that will come to power after the general elections, the schedule for which is likely to be announced by the Election Commission soon.

Prime Minister Manmohan Singh, who had earlier presided over the cabinet meeting where the interim budget was approved, congratulated Chidambaram for a "well balanced" budget, one that portrayed a "realistic picture" of the economic situation in the country.

"The finance minister has aptly summarised the economic and social achievements of the last 10 years which our government is proud of," Manmohan Singh said, as the opposition parties said it had nothing new and only listed past achievements with an eye on polls.

The markets, which briefly slid immediately after the budget speech began, was otherwise positive. The sensitive index (Sensex) of the Bombay Stock Exchange (BSE) ended the day at 20,464.06 points with a gain of 97.24 points or 0.48 percent.

Industry also welcomed Chidambaram's resolve to stay on the fiscal discipline course, while addressing the requirements of sectors such as automobiles, capital goods and consumer electronics in the limited scope that he had at his disposal.

During his speech, the finance minister also rubbished arguments of "policy paralysis" and said the economy was more stable than it was two years ago after steps taken by the government and that the growth would be higher in the second half of the fiscal.

Giving specific numbers, Chidambaram said fiscal deficit for 2013-14 would be contained at 4.6 percent of GDP, against the target of 4.8 percent, and the current account deficit was lower at $45 billion, compared with $88 billion for the previous fiscal.

He also conceded to the long-pending demand for one-rank-one-pension scheme to benefit more than 2.4 million ex-defence personnel from April 1, entitling them to equal post-retirement benefits notwithstanding the year of superannuation.

The finance minister said interventions by his government and the central bank had led to the inflation to come down to 5.05 percent now against 7.3 percent when the budget was presented last year. Core inflation, which excludes items that see volatility in prices, was also down at 3 percent from 4.2 percent, he added.

Chidambaram said the government had made large investments on the infrastructure and energy front, with seven new airports under construction, 19 oil blocks alloted and 50,000 MW of conventional power and 500 MW of solar energy added.

In the financial sector, he proposed capital infusion of Rs.11,200 crore (Rs.112 billion or $1.77 billion) in public sector banks and said a venture capital fund will be set up to promote entrepreneurship among scheduled castes.

FM hits out at critics, says govt has pulled back economy