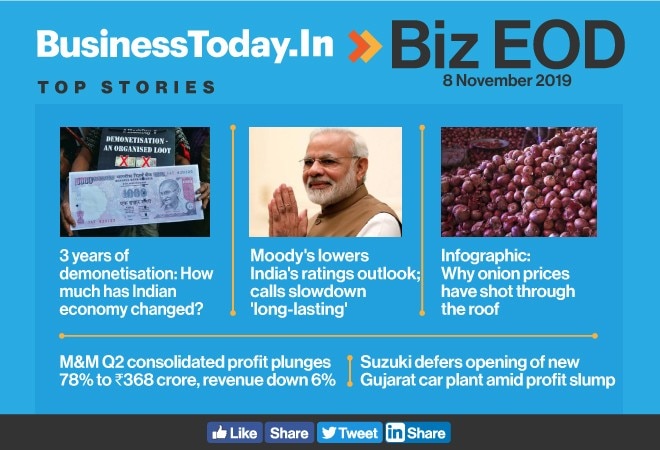 Here's how Indian economy fared in the three years since demonetisation. Moody's Investors Service changed its outlook on India's ratings to "negative" from "stable" over the country's economic slowdown. Suzuki postponed plans to open a car plant in Gujarat on the back on slump in Indian auto industry. Read for more top stories from the world of business and economy.

1. 3 years of demonetisation: How much has Indian economy changed?

Three years down the line, India's economy has seen a lot of turbulence with GDP growth going down to six-year-low, fiscal deficit growing significantly, and various sectors, including auto and manufacturing, facing crises.

Moody's says its India outlook reflects government and policy ineffectiveness in addressing economic weakness; the Modi government says India continues to offer strong prospects of growth in the near and medium-term.

3. Infographic: Why onion prices have shot through the roof

From Rs 7 per kg in January to Rs 100 per kg in November in Mumbai, spiralling onion prices have sent Indian consumers in a tizzy.

Suzuki Motor Corporation, the parent of India's biggest car-maker Maruti Suzuki, was scheduled to commission the plant in Gujarat by April 2020, will now start operation by next July.

Infographic: Why onion prices have shot through the roof