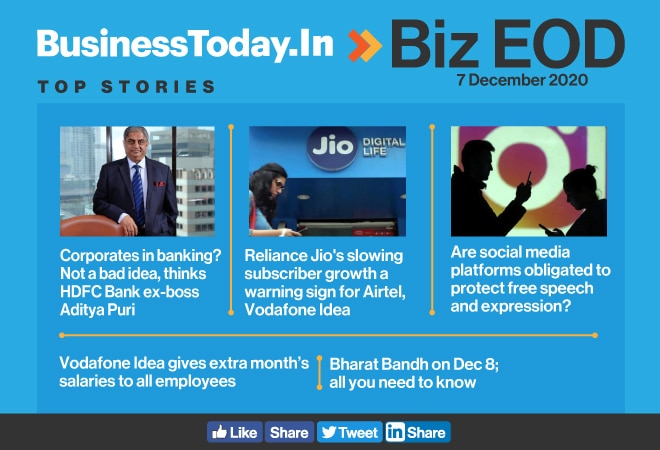 Former HDFC Bank MD and CEO Aditya Puri has said allowing big corporates in the banking business is not a bad idea if there is a proper regulatory framework to ensure appropriate action in time. The latest subscriber data released by TRAI shows market leader Reliance Jio might be losing steam, which might cause trouble for Airtel and Vodafone Idea. Agitated farmers, who are protesting at Delhi's borders for the past 12 days against the recently enacted three contentious farm laws, have announced 'Bharat Bandh' on December 8, Tuesday. Read for more top stories from the world of business and economy:

An internal working group of RBI has recommended that large corporates should be allowed to set up banks. Aditya Puri says if credit, scale and regulations can be ensured, then allowing them is almost a necessity.

In a recent report, Goldman Sachs analysts said that following their conversations with investors, there's a view that Jio will not raise prices and as such Airtel and Vodafone Idea may have to roll back prices if they raise them.

The government should also consider setting up of a unit where platforms may voluntarily (sans any obligation) refer content issues for guidance and views. The platforms can therefore be saved from taking a view on their own accord in tricky situations.

The telco has been making losses and is aiming to ramp up its 4G network and clear the adjusted gross revenue (AGR) dues.