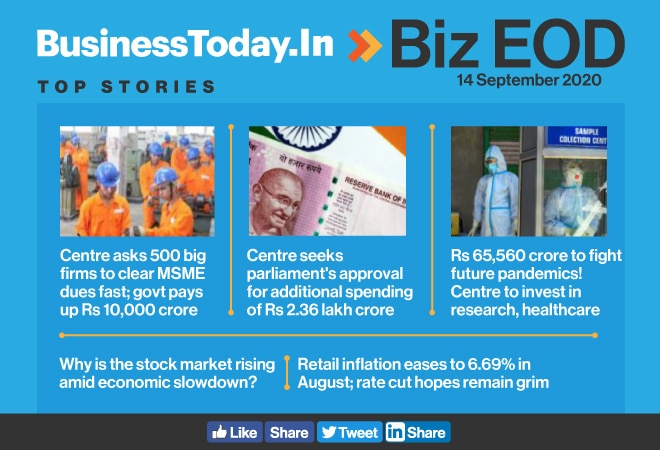 Citing legal provisions under MSMED Act, 2006, the Ministry of MSMEs has asked top 500 corporates to clear dues of cash-starved small firms and vendors. Government is planning to spend Rs 65,561 crore under Prime Minister Atma Nirbhar Swasth Bharat Yojana to identify gaps in health infrastructure. Retail inflation slid down slightly to 6.69 per cent in August, as compared to 6.73 per cent in July, data released by National Statistical Office showed. Read for more top stories from the world of business and economy:

In e-letters sent out to top bosses of the big companies, the Ministry of MSME headed by Nitin Gadkari has said that payment of past dues is very important for MSMEs' survival.

Of the additional expenditure of Rs 2.36 lakh crore, the most notable expenditures include Rs 44,340 crore to provide additional allocation under Post Devolution Revenue Deficit Grant to states.

Stating that an effective vaccine would be the sure-shot tool in containing COVID-19, Dr Vardhan said more than 30 vaccine candidates are in different stages of development in India.

4. Why is the stock market rising amid economic slowdown? A portfolio manager decodes

The first-quarter numbers announced by the companies in India show drop in sales, but their profitability is still quite strong.

Once again retail inflation remained above the Reserve Bank of India's medium-term target of 4-6 per cent, which means a rate cut is not likely to happen in the next monetary policy meet.