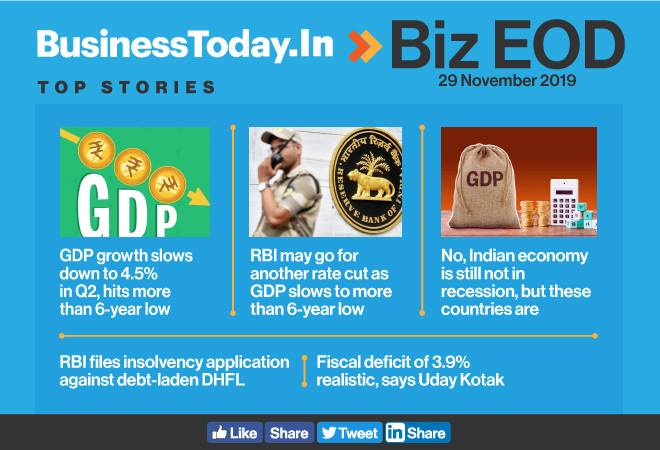 India's GDP growth rate slowed down to 4.5 per cent in the July-September quarter of this fiscal, as per NSO data released on Friday. Given the fragile condition of the Indian economy, RBI may announce another rate cut in its monetary policy announcement scheduled next week. Uday Kotak, VC and CEO of Kotak Mahindra Bank is comfortable with some deviation in the targeted fiscal deficit from 3.3% of the GDP to 3.5% or 3.9% in the fiscal year 2019-20. Read for more top stories from the world of business and economy:

India's Q2 GDP Growth 2019: DEA Secretary Atanu Chakraborty and CEA KV Subramnaian said that the fundamentals of India economy remain strong and the GDP growth rate is expected to bounce back in the third quarter of this fiscal.

2. RBI may go for another rate cut as GDP slows to more than 6-year low

3. No, Indian economy is still not in recession, but these countries are

Q2 GDP: Some of the key economies in the world are in the verge of recession raising fears about the global economic health.

DHFL is one of the biggest defaulters in the country that owes over Rs 1 lakh crore (over $14 billion) to its debtors.

The just released GDP data for the second quarter (July-September) shows that the growth has gone down to 4.5 per cent (the lowest in six years) from 5 per cent in the first quarter (April-June).