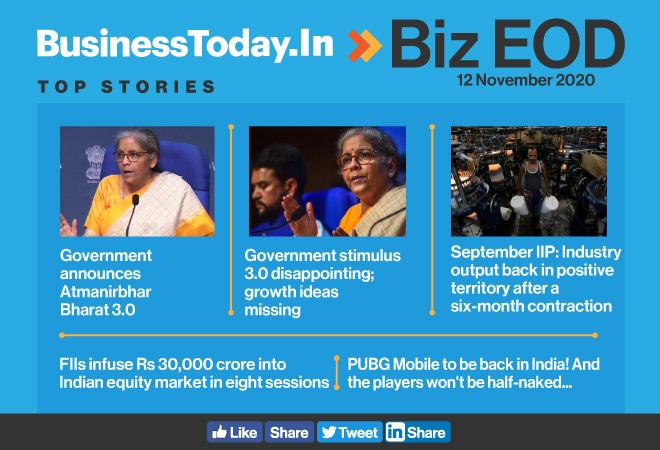 "Most of the benefits announced today are for large corporate and foreign incoming companies to attract fresh investments. Ground-level issues and problems at delivery points in the existing schemes and packages have not been recognised and resolved," says KE Raghunathan, convenor, Consortium of Indian Association.

FIIs have infused Rs 29,782 crore in just eight sessions into the Indian equity market which has been buoyed by prospects of a change in leadership in US and the subsequent result coupled with strong Q2 earnings.

4. September IIP: Industry output back in positive territory after a six-month contraction

The September IIP growth was marked by a positive rise in both electricity and mining whilst the key category of manufacturing is still in the negative territory, registering a decline of 0.6%.

5. PUBG Mobile to be back in India! And the players won't be half-naked...

The new version will be called PUBG Mobile India, where the word "India" indicates the many things that went wrong with the game's previous version, leading to its ban.