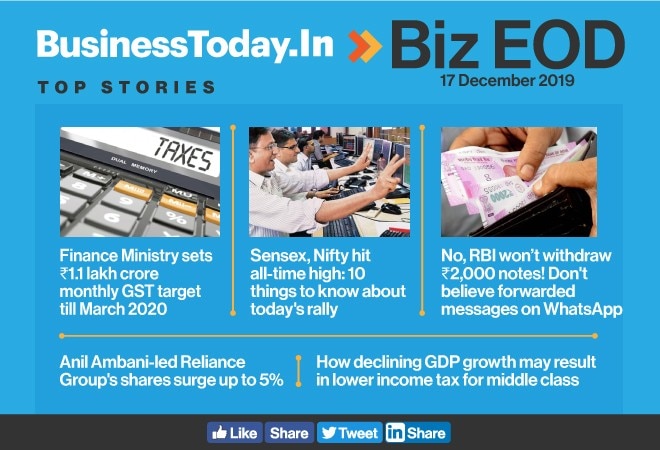 Finance Ministry has directed tax officials to meet the revenue targets for direct and indirect taxes without disturbing taxpayers. Sensex and Nifty rose on the back of gains in banking, metal and IT stocks. The decline in GDP growth may be a blessing in disguise for the Indian middle class. Read for more top stories from the world of business and economy:

In a meeting between Finance Ministry and senior tax officials, it was clarified that corporate tax relief worth Rs 1.45 lakh crore will not be entertained as an excuse for downturn in direct tax revenue.

A fake WhatsApp message states that after December 31, citizens would not be able to exchange their Rs 2,000 notes. The government has clarified that the RBI has made no such announcement.

4. Anil Ambani-led Reliance Group's shares surge up to 5%; here's why

Share price of Reliance Capital was locked in the 5 per cent upper circuit at Rs 11.90 on the BSE. In the last three trading sessions, the stock of the NBFC firm has hit upper circuit limit of 5 per cent.

5. How declining GDP growth may result in lower income tax for middle class

Unfortunately for the government, even if tax reliefs are announced it won't come with the certainty that consumption will revive and economy will get back to growth trajectory.