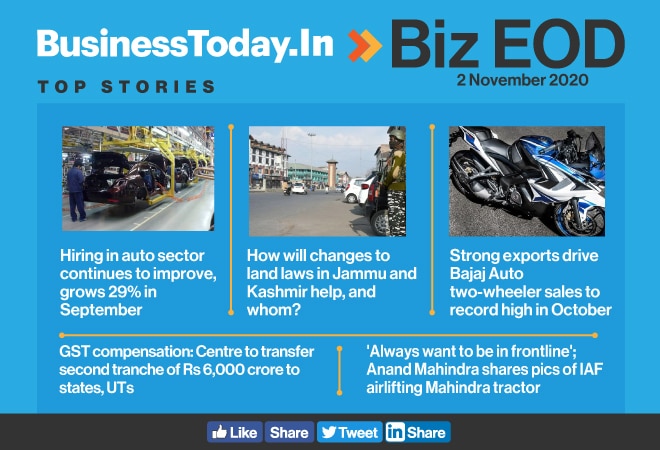 Hiring in India's auto sector further improved in September this year, even though it continues to stay below the pre-COVID-19 level. The argument that the new laws are intended to spur investment and boost growth is spurious. Chairman of Mahindra Group Anand Mahindra shared photos of an Indian Air Force chopper airlifting a Mahindra tractor on Twitter and highlighted his company's role towards the defence of the nation. Read for more top stories from the world of business and economy:

1. Hiring in auto sector continues to improve, grows 29% in September

This positive trend has persisted since June 2020 and the auto sector has been recovering month on month, Naukri.com said in a statement.

2. How will changes to land laws in Jammu and Kashmir help, and whom?

The argument that the new laws are intended to spur investment and boost growth is spurious; more so after special rights and privileges were revoked, the state was downgraded to union territories and its people and political leaders were shut out of democratic space.

Bajaj Auto October sales: The auto major recorded highest ever export sales of 230,878 units as against 184,432 units in the year-ago period, registering a YoY growth of 25 per cent.

The Ministry of Finance, on October 23, had transferred the first tranche of Rs 6,000 crore to 16 States and 3 Union Territories for meeting their GST compensation cess shortfall under a special borrowing window.

Anand Mahindra tweeted, "I think most people will get the right answer... What a great pic for our archives. We always want to be in the front line and in the thick of the action..."