Catch the biggest headline from the world of business and economy with BusinessToday.In's end of day (EOD) report 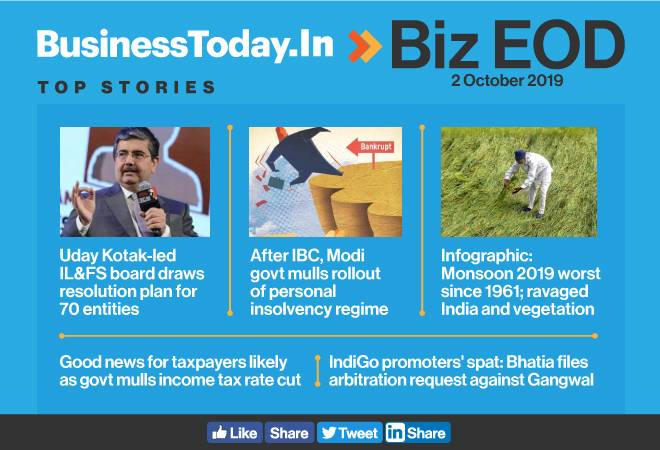 The new IL&FS board, under the chairmanship of Uday Kotak, has managed to put together a resolution plan for around 70 entities with a total debt of Rs 36,500 crore. The personal insolvency law may finally see the light of day. Extended monsoon in 2019 has affected food supply, increasing prices, and even hindered sowing of Kharif crops. Read for more top stories from the world of business and economy:

The IL&FS board met 25 times in the last year -- almost twice every month; they also strengthened the management team, conducted a forensic audit and managed cost rationalisation.

MCA Secretary Injeti Srinivas says personal insolvency is a large subject as it would bring every kind of borrower under its ambit, and hence the government is planning to roll it out in phases.

Gangwal had early this month once again written to SEBI urging action on governance issues raised by him against Bhatia.

CBDT-member Akhilesh Ranjan-led panel has recommended introducing a 10 per cent tax rate slab for annual income between Rs 2.5 lakh and Rs 10 lakh followed by a 20 per cent slab for the Rs 10-20 lakh income bracket and a 30 per cent, or higher, slab for higher income levels.

Extended monsoon and excessive rains in 2019 have affected food supply, increased prices, and even hindered sowing of kharif crops. Here's a look at how rainfall this season affected crops and food prices.