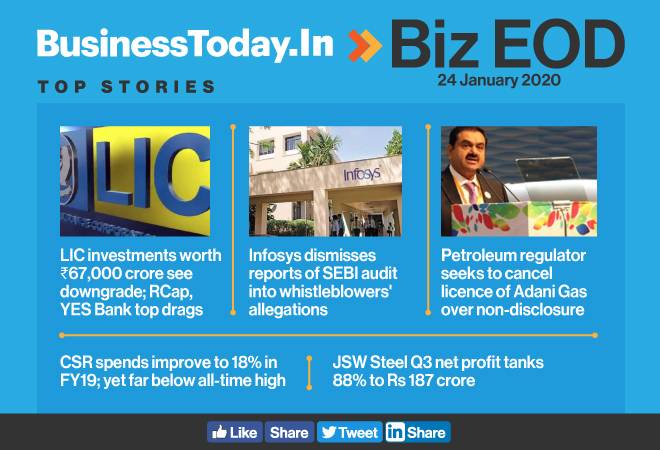 The Life Insurance Corporation (LIC) is saddled with a downgraded investment portfolio of over Rs 67,000 crore. The Corporate Social Responsibility (CSR) spends by companies listed on the NSE increased 18 per cent to Rs 11,961 crore in financial year 2018-19, a year-on-year growth of nearly 12 per cent in comparison to the previous fiscal. JSW Steel posted an 88.3 per cent decline in net profit for December quarter of the current fiscal. Read for more top stories from the world of business and economy:

A bulk of these downgrades happened over the last three years. Any downgrade is not good because the pricing (interest rate) takes place based on the rating profile of the corporate.

The company has not received any request from SEBI to conduct further audits into the anonymous whistleblower investigation as reported by media, Infosys said in a filing to the stock exchanges.

Adani Gas had bid for city gas distribution projects using net worth calculation of Adani Enterprises without disclosing the scheme of arrangement between the two companies.

JSW Steel's revenue from operations dipped 11.13 per cent to Rs 18,055 crore during the quarter under review, as opposed to Rs 20,318 crore in the December quarter last fiscal.