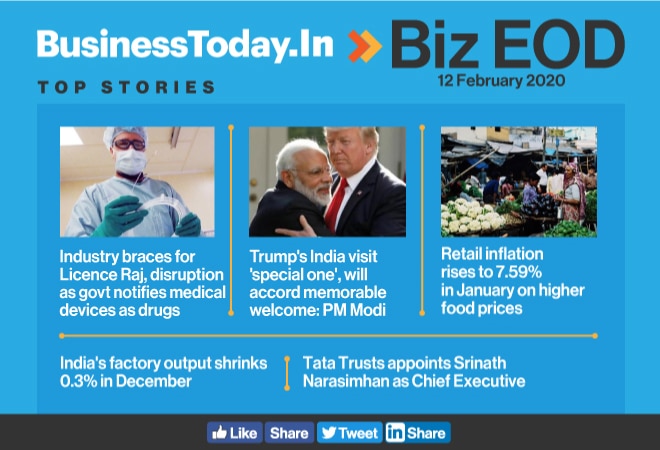 Indian medical device sector is in for a major disruption after the central government has notified all medical devices -- syringes to PET scanners to dialysis machines -- as drugs for quality certification and monitoring purposes on February 11. Prime Minister Narendra Modi has said he's delighted that US President Donald Trump and US first lady Melania Trump will visit India. Retail inflation inched upwards to 7.59 per cent during January, showed data released by the National Statistics Office. Read for more top stories from the world of business and economy:

Decision is going to have a major impact on the small and marginal players, largely unorganised, in low-value high volume segment of medical devices industry.

PM Modi says relationship between India and the US matters not only for people of both countries but entire world; our nations are cooperating extensively on a wide range of issues, says the PM.

3. Retail inflation rises to 7.59% in January on higher food prices

This is the second month that inflation remained above the upper limit of 6 per cent set by Reserve Bank of India. It has maintained an upward trend since Janaury 2019, when it was 1.97 per cent.

The industry group 'manufacture of computer, electronic and optical products' reported the highest negative growth of 24.9 per cent followed by 20.3 per cent in 'manufacture of machinery and equipment.

The Trustees also appointed Pramit Jhaveri, former Chief Executive Officer of Citi India and former Vice Chairman of banking, capital markets and advisory for the Asia Pacific, as a Trustee of the Sir Dorabji Tata Trust.