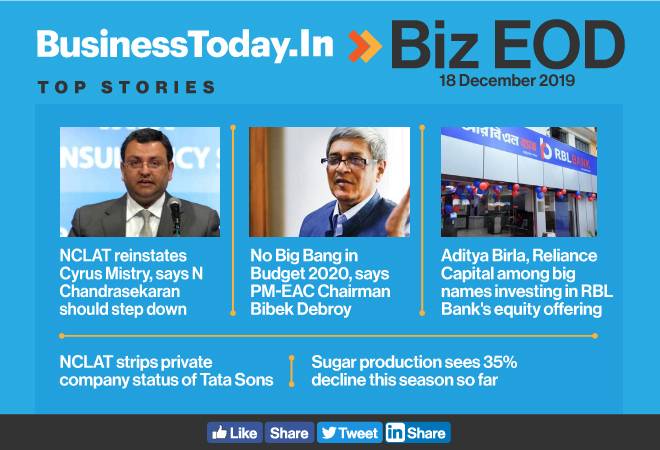 The National Company Law Appellate Tribunal has asked Tata Sons to reinstate former chairman Cyrus Mistry, who was unceremoniously removed from the company's board in October 2016. PM-EAC Chairman Bibek Debroy has set very low expectations from Budget 2020 given that the Centre neither has the leeway to cut taxes to stoke demand, nor can it hike GST rates to increase revenue. India's sugar production this season has registered a decline of nearly 35 per cent at 45.81 lakh tonnes against 70.54 lakh tonnes as on December 15, 2019. Read for more top stories from the world of business and economy:

NCLAT restores Cyrus Mistry as Executive Chairman: Tata Group plans to approach the SC to stay the order immediately before the Court goes on leave during Christmas and New Year vacation.

Centre's hands are tied as it does not have the fiscal leeway to cut personal income tax; This is not the right time to hike GST rates when (GDP) growth rates are very low as it could slow down the economy further.

RBL Bank needs capital for growth, expansion of retail franchise and as a cushion for any provisioning against bad loans.

Higher production in Uttar Pradesh, country's largest sugar producing state, which has so far produced 21.25 lakh tonnes (12.2 percent more than last year), is the main reason for the decline in deficit.