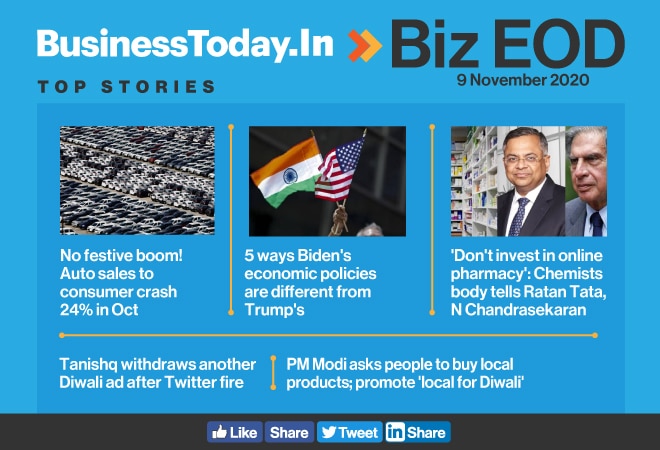 Retail sale of automobiles in October gave a stark reminder of the magnitude of the challenge that confronts the domestic automobile industry. As the President-elect Joe Biden looks set to take charge in early 2021, the expectation of fresh stimulus targeted at supporting a large spectrum of US households and small businesses gets stronger. Tanishq has withdrawn another ad from Twitter that managed to ruffle some feathers. Read for more top stories from the world of business and economy:

1) No festive boom! Auto sales to consumer crash 24% in Oct

Tanishq removes new ad from Twitter after backlash: Sayani Gupta said that she would spend some time with her mother and would not burst firecrackers.

AIOCD, which has a membership strength of 8.5 lakh retail and wholesale medicine sellers, has been opposing online pharmacies ever since the government mooted the idea of allowing such players in the country.