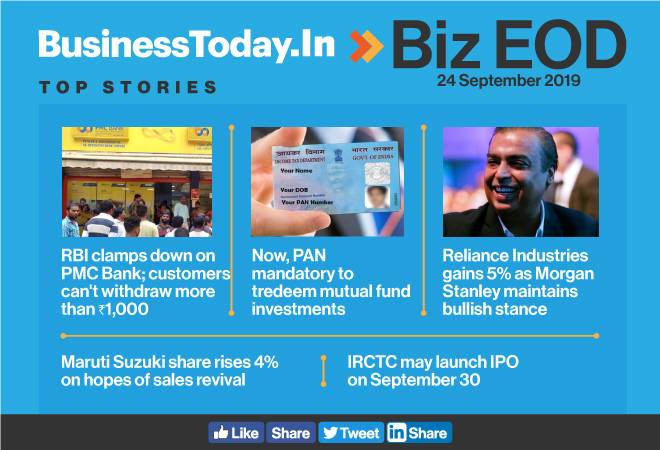 The Reserve Bank of India has imposed operational restrictions on Mumbai-based Punjab and Maharashtra Cooperative Bank (PMC) as it investigates the alleged charges of irregularities in the bank. Shares of Reliance Industries rallied nearly 5% to the month's high of Rs 1,298 on the BSE on Tuesday after foreign brokerage Morgan Stanley maintained its 'overweight' stance on the company's stock. State-run Indian Railway Catering and Tourism Corp Ltd (IRCTC) is expected to launch its initial public offering (IPO) on 30 September. Read for more top stories from the world of business and economy:

RBI imposes restrictions on PMC Bank: The imposition will be in force for six months from September 23.

The announcement came after a recent Securities and Exchange Board of India (SEBI) inspection of mutual funds, in which it was found that some mutual funds and registrar and transfer agents had processed redemption requests without obtaining the PAN information.

3. IRCTC may launch IPO on September 30

IRCTC is expected to raise Rs 500-600 crore through IPO as it plans to offload about two crore equity shares of the face value of Rs 10 each through an offer for sale by the government.

With a price reduction of only half  a per cent, price of the base model of Maruti Swift can go down by only Rs 2,570 given the tag of Rs 5.14 lakh for the petrol version.