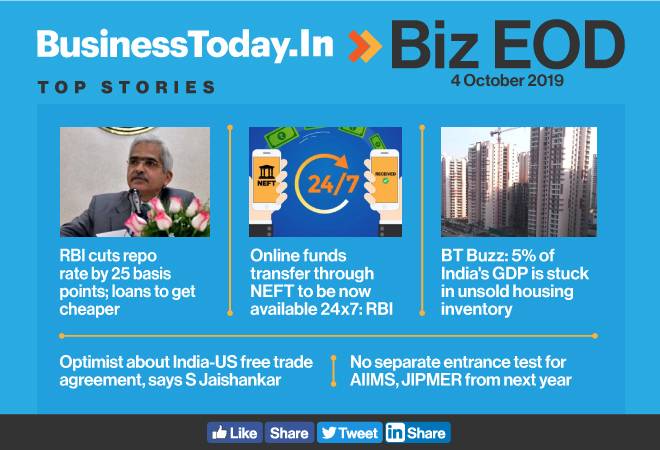 The Reserve Bank of India's (RBI) Monetary Policy Committee (MPC) cut the key repo rate by 25 basis points to 5.15 per cent and maintained its 'accommodative' stance. The six-member MPC of the RBI said that the online money transfer through National Electronic Funds Transfer will be now available 24x7. Over 13 lakh houses worth Rs 9.38 lakh crore, or about 5 per cent of India's GDP, are lying unsold across the country as the real estate sector grapples with the worst-ever slowdown in the last many decades. Read for more top stories from the world of business and economy:

RBI repo rate cut: The central bank, which in its August MPC meet had predicted GDP growth of 6.9 per cent in FY20, revises its forecast to 6.1 per cent.

The RBI also said that round-the-clock NEFT facility will strengthen the fund management system of banks. The move is likely to reform the retail payments system in India.

The value of this inventory at Rs 9.38 lakh crore is more than the gross state domestic product (GSDP) of most states including Kerala, Haryana, Madhya Pradesh, Andhra Pradesh, and is almost double the GSDP of Bihar.

On the Jammu and Kashmir issue, the foreign minister said he spoke about it in detail when he was in the US and felt confident that more people were coming around to India's position.

The effort to move to a single examination system is part of government's efforts to overhaul India's medical education system through a recently passed National Medical Commission (NMC) Act.