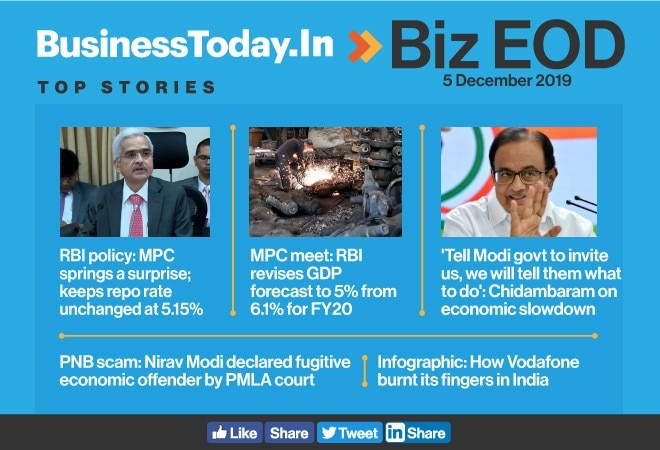 Against expectations, RBI's monetary policy committee kept repo rate unchanged at 5.15 per cent. Former Finance Minister P Chidambaram said that Modi government should invite the Congress to discuss the state of economy. Also, a look at what caused Vodafone to spiral down in India after a solid start. Read for top stories from the world of business and economy:

The monetary policy panel under RBI Governor Shaktikanta Das has kept the repo rate unchanged at 5.15 per cent; the central bank says it'll continue with its 'accommodative' stance.

Since February, RBI has revised its GDP growth projections for financial year 2020 from 7.4 per cent in February to 5 per cent now, which is sharpest such revision in the recent years.

3. 'Tell Modi govt to invite us, we will tell them what to do': Chidambaram on economic slowdown

The government is clueless on the economy, it is stubborn and mulish in defending catastrophic mistakes like demonetisation, flawed GST, tax terrorism, says the former Finance Minister.

Nirav Modi is the second businessman after Vijay Mallya to be declared a fugitive economic offender under the provisions of the new PMLA Act which came into existence in August last year.

5. Infographic: How Vodafone burnt its fingers in India

Vodafone entered India in 2007 with the hope to make big gains in a growing telecom market, but 12 years later that hope stands crushed due to tax hurdles and aggressive competitors.