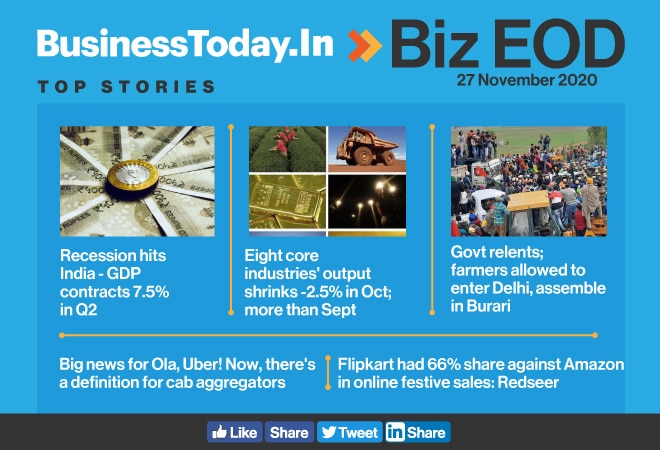 India is officially in recession. The economy has contracted for the second successive quarter. In a first, the Centre has come up with guidelines to regulate cab aggregators such as Ola and Uber, among others, in the country. Flipkart emerged as the winner in the recent festive sales where the Walmart-owned e-commerce player battled against Amazon in the domestic market. Read for more top stories from the world of business and economy:

The pace of contraction in the September quarter is considerably slower than the 23.9 per cent decline registered in the June quarter, bolstering hopes of recovery.

The cumulative eight core infrastructure sectors' growth during April to October 2020-21 contracted by 13 per cent.

Several thousand farmers from Punjab and Haryana have started reaching the borders of Delhi since this morning. It had resulted in skirmishes on the border after police started using water cannons and tear-gas on farmer groups.

The government has defined the meaning of aggregator, through Motor Vehicle aggregator guidelines, as digital mediators or marketplaces for passengers to connect with a driver for the intent of transportation.

5. Flipkart had 66% share against Amazon in online festive sales: Redseer

Among all leading retailers, Flipkart and Amazon contributed to 90% of sales between mid-October to November.