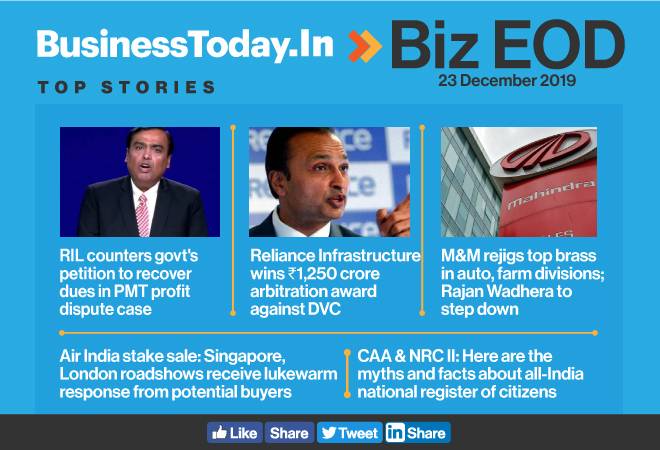 RIL submitted the affidavit in response to the government's move to the Delhi HC, seeking to block RIL selling a 20 per cent stake in its oil-and-chemicals business to Saudi Aramco for $15 billion, in view of dues of $3.5 billion in the PMT oil and gas fields

The arbitration tribunal awarded the case in favour of Reliance Infrastructure and directed DVC to pay Rs 896 crore and return the bank guarantees of Rs 354 crore within four weeks or pay additional interest, at the rate of 15 per cent annually, for any delay in payment beyond four weeks

In its Group Corporate Office (GCO), S Durgashankar will be assigned an enhanced role as Group Controller of Finance and Accounts. In auto and farm sectors, Veejay Nakra will be appointed CEO of auto division

The tepid response, however, is unlikely to delay the government's proposed privatisation plan schedule which is expected to conclude initial bidding documents for Air India by next month

5. CAA & NRC II: Here are the myths and facts about all-India national register of citizens