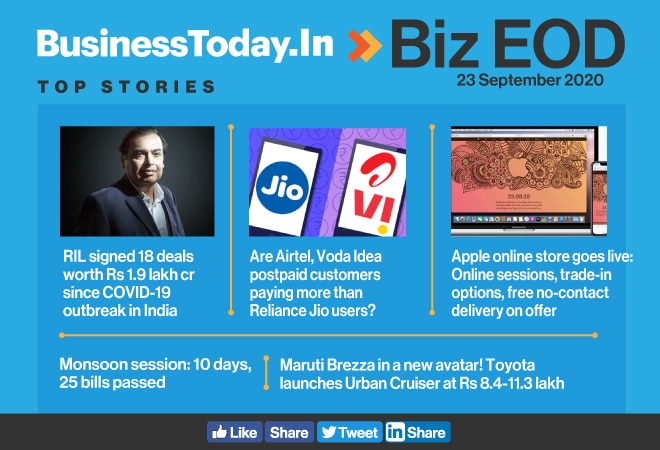 Ambani-led Reliance Industries has signed 18 deals worth Rs 1,90,438 crore since the first COVID-19 infused lockdown was imposed in India in March. On Wednesday alone, the Rajya Sabha passed three key labour reform bills on industrial relations, social security and occupational safety by voice votes. Toyota forayed into the compact SUV segment with the Urban Cruiser - a re-badged version of Maruti's bestseller Vitara Brezza. Read for more top stories from the world of business and economy:

Reliance Jio's masterstroke comes at a time when both Airtel and Vodafone Idea have been talking about the need to increase the prices promptly to mend the telecom industry's financials.

On Wednesday alone, Rajya Sabha passed three key labour reform bills on industrial relations, social security and occupational safety by voice votes; in total, Upper House had to hold 18 sittings but only 10 could be held due to fear of COVID-19 spread in Parliament.

To differentiate itself from the Brezza, Toyota has made cosmetic changes with the bumper and grille of the vehicle in the front and colour combination inside while also doing away with a like to like entry-level variant for the Brezza LXi which has a starting price of Rs 7.34 lakh.

Customers can now buy all of its products including the recently launched iPad, Apple Watch Series 6 and Apple Watch SE directly from the online portal. It is also offering trade-in options.