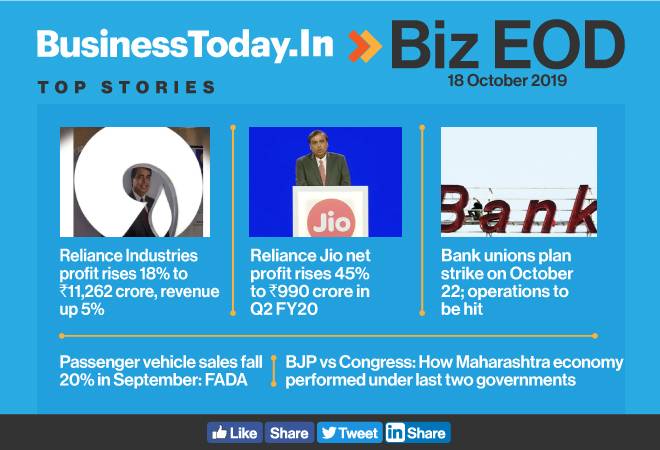 Mukesh Ambani-led Reliance Industries on Friday reported 18.37 per cent y-o-y growth in consolidated net profit at Rs 11,262 crore for the second quarter ended September 30, 2019. Reliance Jio reported a 45.4 per cent increase in net profit for the quarter ended September 30. Public sector banks unions are planning a strike on October 22 (Tuesday) over the merger of public sector banks. Read for more top stories from the world of business and economy:

September is traditionally not the best month for vehicle sales due to the 15-day inauspicious shradh period. Sales were also impacted by the uncertainty over a possible GST cut that never came.

AITUC says the government's decision to merge 10 public sector banks into four is "unfortunate" and totally "unwarranted"; bank unions other demands include banking reforms, recovery of bad loans and action against defaulters.

The consolidated net revenue grew by 4.8 per cent to Rs 163,854 crore in July-September quarter of FY20, compared to Rs 1,56,291 crore in the corresponding quarter.

We have compiled data to compare how the economy of the state has performed under the last two governments -- the incumbent BJP that came to power in 2014 and INC that ruled the state for over a decade until 2014.