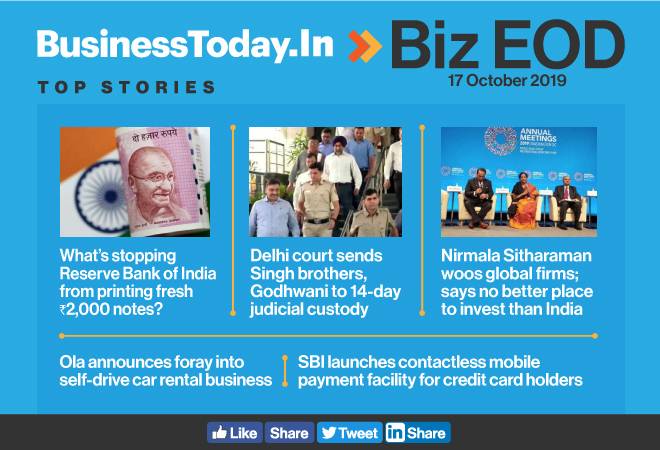 Going by the RBI's annual report for 2018-19 and a recent RTI query, the printing of new Rs 2,000 notes has halted altogether in the last 18 months. Delhi's Saket court on Thursday sent former Religare promoters Malvinder Singh, Shivinder Singh and 3 others to judicial custody till October 31 in a fund misappropriation case related to Religare Finvest Ltd. Union Minister of Finance Nirmala Sitharaman, while speaking at the IMF's headquarters in Washington DC, said there would be no better place to invest in the world than India. Read for more top stories from the world of business and economy:

While the RBI has not specified any reason, the market is attributing it to hoarding of high value notes or the optimal size of Rs 2000 notes in the system

Taking a dig at China while making a pitch for India, the FM said though India's court system is a bit delayed, it's a "transparent and open society" where rule of law works

Ola said it plans to offer more flexibility to users by giving them freedom to design their own package, and control everything from the number of kilometres and hours, to fuel inclusion