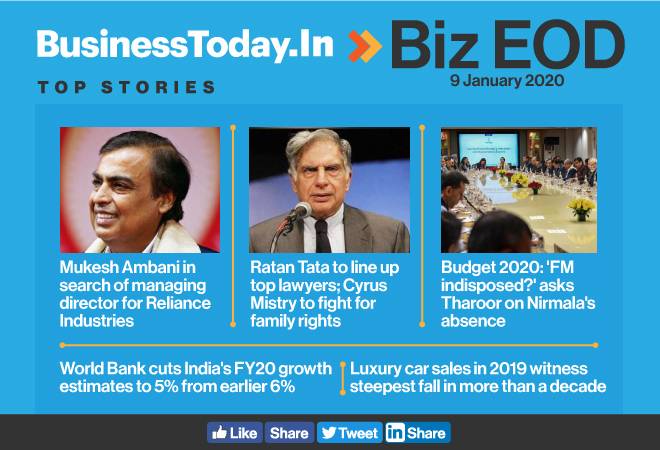 In line with SEBI's guideline to separate the roles of chairman and managing director/CEO of all listed entities by April 1, Reliance Industries chairman and managing director Mukesh Ambani is in search of a new MD within Reliance Industries to lead India's most valuable company. FM Nirmala Sitharaman, as well as the Minister of State for Finance Anurag Thakur's joint absence from the Prime Minister's pre-Budget meeting with economists, didn't go unnoticed as Congress MP Shashi Tharoor took to Twitter questioning why she didn't attend the meet. Luxury car sales in India in 2019 saw the biggest fall in over a decade. Read for more top stories from the world of business and economy:

1. Mukesh Ambani in search of MD for Reliance Industries; family member ruled out

Mukesh Ambani is expected to shed his executive tag and become non-executive chairman of Reliance Industries in compliance with the Securities and Exchange Board of India (Sebi) guidelines if they come into effect on April 1, as scheduled.

Tata-Mistry case: Mistry wants to protect his family's shareholding of 18.37 per cent in the holding company Tata Sons, while Tata targets to block the re-entry of Mistry in the group in any role.

In response to Tharoor's tweet, FM Nirmala Sitharaman's office tweeted that she "has already met industrialists, experts, and economists during the pre-budget consultations".

World Bank also expects India's growth to pick up slightly to 5.8 per cent in the next fiscal.

5. Luxury car sales in 2019 witness steepest fall in more than a decade