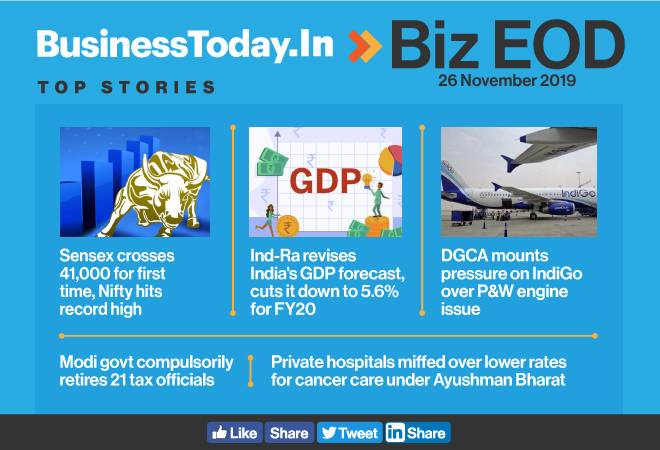 The Indian equities extended rally for the second consecutive session, with Sensex rising over 200 points to hit its all-time high of 41,120 and Nifty surging to its lifetime peak of 12,132. The DGCA on Monday directed IndiGo to ground an old A320neo family aircraft with an unmodified P&W engine each time it inducts a new A320neo plane into its fleet. CBDT has compulsorily retired 21 Group B officers of ITO rank today under Fundamental Rule 56(j) over charges of corruption, illegal gratification, misuse of official position, and other allegations. Read for more top stories from the world of business and economy:

Ind-Ra said that even GDP growth of 5.6 per cent will "require heavy lifting by the government". It warned that sticking to the fiscal deficit target of 3.3 per cent could push GDP growth even below 5.6 per cent.

Aviation regulator DGCA gave the directive to IndiGo to comply with the January 31 deadline to replace all unmodified PW engines on its A320neo aircraft or face the grounding of planes.

A total of 85 officers, including 64 high ranking tax officers, have been compulsorily retired under Fundamental Rule 56 (J) so far in this year.

The new package rates finalised about a month ago are now up on the Ayushman Bharat website. Some private hospitals do not find the rates viable.