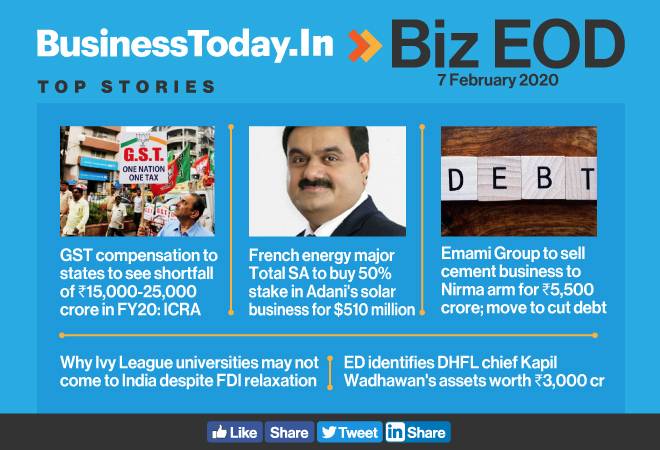 Read for more top stories from the world of business and economy:

Centre pegs cess collection at Rs 98,000 crore in FY20, of which Rs 70,500 crore has been collected till December 2019, suggesting govt expects a further inflow of around Rs 28,000-crore cess in the fourth quarter of this fiscal.

As a part of the binding agreement between the two companies, Total SA will own half of a joint venture (JV) company that will house 2,148 MW of operating solar projects owned by Adani Green Energy Ltd (AGEL) which will hold the balance (50%) stake in it.

The move is aimed at paring Emami Group's debt which is around Rs 2,600 crore, however, the promoters of the conglomerate have sought a much higher valuation from Nirma Group.

4. Why Ivy League universities may not come to India despite FDI relaxation

Even though the consolidated FDI Policy, 2017, already allowed FDI up to 100%, global educational institutions were not interested in entering India because there were too many conditions.

The value of these properties is pegged at Rs 3,000 crore. The ED suspects that Wadhawans had allegedly brought several other properties in the name of shell companies created by them or their associates.