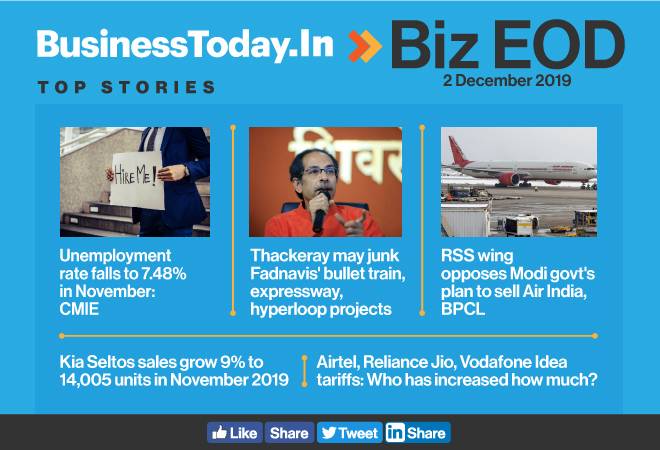 The unemployment rate fell close to 1 per cent in November to 7.48% from 8.45% in October 2019, according to the Centre for Monitoring Indian Economy (CMIE) data. With the new Maharashtra government headed by Uddhav Thackeray, the fate of some of fancy and marquee infrastructure projects being implemented by the former CM Fadnavis is likely to have an uncertain future. Kia Motors India has posted its highest-ever monthly sales in November 2019. The sales of SUV Seltos in India crossed 14,005 units in November this year. Read for more top stories from the world of business and economy:

India's unemployment rate remains high for the month of November 2019 at 7.48% amid lowest labour participation rate of just 42.37%.

The RSS affiliate opposed PM Modi-led govt's disinvestment plan, calling for a new comprehensive policy that defines the role of public sector enterprises and their worth in making India more stronger.

5. Airtel, Reliance Jio, Vodafone Idea tariffs: Who has increased how much?

Both Bharti Airtel and Vodafone Idea have said their new rates in the "unlimited" category will replace their existing prepaid plans with up to 50 per cent higher cost; Jio says it'll roll out new all-in-one plans with unlimited voice and data at up to 40 per cent higher price from December 6.