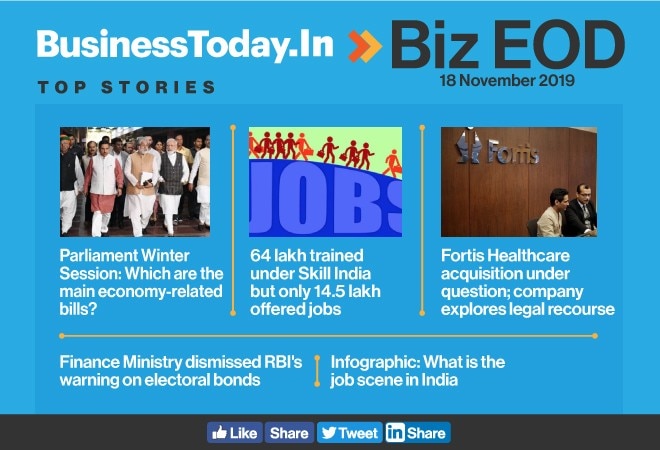 As Winter Session of Parliament begins, a look at the key economy-related bills that will be tabled for the Houses' approval. Supreme Court holds Fortis Healthcare in contempt over selling a controlling stake to Malaysia's IHH Healthcare Berhad despite its status quo order in the matter. And slowing economy has put millions of jobs across sectors at risk. Read for more top stories from the world of business and economy:

1. Parliament Winter Session: Which are the main economy-related bills?

In this session, the Parliament is going to take up key economic bills for discussion, including Insolvency and Bankruptcy Amendment Bill, Taxation Law Amendment Ordinance and Competition (Amendment) Bill, etc.

2. 64 lakh trained under Skill India but only 14.5 lakh offered jobs

38 sector skill councils have been set up which help in training need analysis, curriculum development, rolling out of training, and assessment and certification, junior minister RK Singh told Lok Sabha.

In its defence, Fortis Healthcare has firmly stated that no part of proceeds from the stake sale to IHH Healthcare was paid to Malvinder Singh, Shivinder Singh, or any of their controlled entities.

Before Budget 2017, the Reserve Bank of India had told the government that issuing such electoral bonds would encourage money laundering and would undermine the faith in Indian currency.

5. Infographic: What is the job scene in India

As macroeconomic indicators continue to disappoint, employees in India are facing the headwinds of corporate cost optimisation.