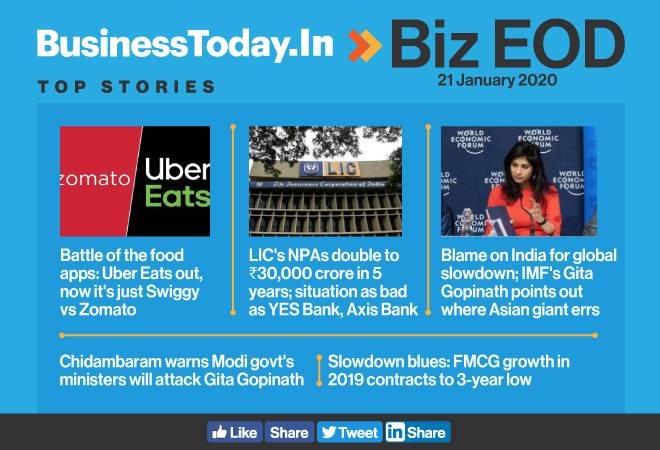 Food app company Zomato announced the acquisition of Uber's food delivery business in India in an all-stock transaction. The LIC's gross NPAs at 6.10 per cent for the first six months (April-September) of 2019-20 are comparable to banks such as YES Bank, Axis Bank and ICICI Bank. Growth in the fast-moving consumer goods (FMCG) sector slid to a three-year low of 9.7 per cent in 2019 largely due to a steep contraction in the rural market, data analytics firm Nielsen said. Read for more top stories from the world of business and economy:

1. Battle of the food apps: Uber Eats out, now it's just Swiggy vs Zomato

According to an analyst, Swiggy delivers 42 million orders a month while Zomato delivers about 37 million.

The big defaulters are the same as for banks. The names include Deccan Chronicle, Essar Port, Gammon, IL&FS, Bhushan Power, Videocon Industries.

Mysuru-born Gita Gopinath said that the economic slowdown in India had impacted global forecasts by over 80 per cent.

Chidamabaram says IMF Chief Economist Gita Gopinath was one of the first to denounce demonetisation; we must prepare ourselves for an attack by government ministers on the IMF and Dr Gita Gopinath, he adds.

For this year, data analytics firm Nielsen is projecting a growth of 9-10 per cent and has added that the first quarter this year (January-March 2020) may see a growth of 8-9 per cent.