Corporate earnings according to Motilal Oswal are likely to continue their recovery phase in Q3FY21 aided by a pick-up in both global and domestic macroeconomic activity. Vaccine rollout has changed the broader sentiments and is helping the demand recovery

After almost a year-long contraction, the Nifty 50 companies reported positive growth in the aggregate net profit in the second quarter of FY21. Most analysts and brokerages expect this earnings momentum to gain traction in the December quarter with a higher double-digit growth of up to 20 per cent, year-on-year, on easing restriction and higher demand owing to the festive season. 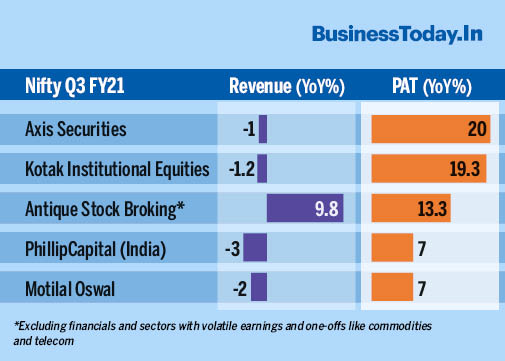 Antique expects recovery in earnings momentum to gain traction in Q3 as economic activities have started to normalise. "Excluding financials and sectors with volatile earnings and one-offs like commodities and telecom - Nifty50 revenue, EBITDA, PBT and PAT y-o-y growth is expected to be 9.8 per cent, 18.0 per cent, 14.5 per cent and 13.3 per cent (on free-float basis). Margin is expected to improve sharply from 18.2 per cent to 19.5 per cent mainly driven by metals and healthcare. Sectors which are expected to report sharp YoY earnings growth are metals, healthcare and cement; while earnings contraction is likely to be seen in NBFC and energy," it highlights in its earnings preview report.

According to PhillipCapital Q3 earnings are estimated to be robust owing to festive season, easing of restrictions, and higher demand. It has pegged Nifty earnings growth at 7 per cent, y-o-y, ex-financials at 15 per cent and revenue growth at -3 per cent, ex-oil & gas at 16 per cent.

Corporate earnings according to Motilal Oswal are likely to continue their recovery phase in Q3FY21 aided by a pick-up in both global and domestic macroeconomic activity. Vaccine rollout has changed the broader sentiments and is helping the demand recovery. The third quarter has also been characterised by demand side recovery due to the festive season as well as sequential drop in COVID-19 cases. "We expect EBITDA, PBT and PAT for Nifty to grow by 10 per cent, 9 per cent and 7 per cent y-o-y, respectively. Earnings growth would be led by cyclicals like metals and cement. Ex-metals and cement, Nifty EBITDA, PBT and PAT should post 7 per cent, 2 per cent and -0.5 per cent growth respectively. However, sales for the constituents are estimated to decline 2%, y-o-y - the sixth consecutive quarter of a sales decline - entirely dragged by oil & gas constituents. Ex-oil& gas, Nifty sales are expected to grow 7.7 per cent, highest in seven quarters," it points out in a report.